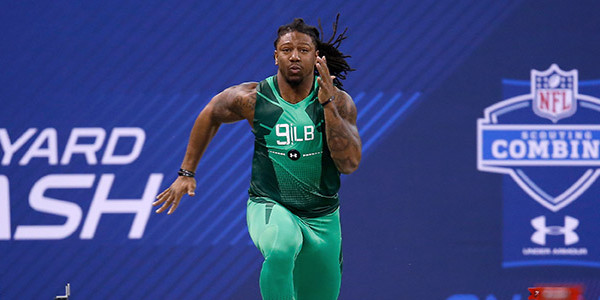 The dust has settled and the draft is over. Every analyst is giving out grades for how each team did, which is nothing but talk and speculation at this point, since even the 2013 draft is hard to grade at this point in time.

This will be one of your different looks at the draft. I’m more concerned with how these players may fit in the system, versus any measurables, college statistics, etc. For what it’s worth, I was very happy with the Steelers draft. I felt they addressed needs by adding potential starters and depth to critical positions.

If you’re in the same camp as I, I jumped off the couch when this pick was made. I nearly bit off all of my fingernails as this pick approached, watching team after team pass on Dupree. Heading into the draft, I wasn’t sure if the Steelers would take a CB, S or LB with their first round selection.

I also wasn’t sure who would be available to them at pick 22. I was concerned that options such as Marcus Peters, Randy Gregory or Shane Ray would leave the Steelers in a jackpot, should those players’ personal issues surface. Instead, Kansas City chose Peters and Dupree fell to the Steelers spot, making this selection a no-brainer.

Dupree is a physically gifted, athletic freak. Don’t take my word for it though. Dupree marks the 3rd straight LB taken in the first round by Pittsburgh, and potentially gives the team 4 overall 1st round choices as starters with Jarvis Jones, Ryan Shazier and Lawrence Timmons. If and when these youngsters figure it out, this could be the choice that solidifies the defense for years to come.

Most fans and analysts were abuzz over names like Marcus Peters, Kevin Johnson or Byron Jones. Even Jalen Collins and Eric Rowe were mentioned as potential DB fits for the Steelers. There were rumors floating around on Day 2 that Pittsburgh would move up in the draft, potentially for TE Maxx Williams or S Landon Collins.

Personally, I didn’t want the team to give up too much for 2 players I didn’t feel were worth moving up for. That’s why I loved Baltimore’s move to snag Williams before the Steelers’ next pick. Like the KC selection of Peters, this kept the team from making a suspect choice of BPA (Best Player Available) when there was better value later in the draft.

As for Golson, looking at his tape, the guy plays way bigger than his physical attributes dictate. He will be criticized early for being small, but that never stopped this guy named Darrelle Revis; not that Golson is in that category, but never say never…

That was the consensus knee-jerk reaction, much like the reaction to not taking a DB with the first round pick, but the selection of Coates may turn out to be a very, very wise one.

Consider the depth behind the top 3 WRs on the depth chart: there is none, unless you feel Darrius Heyward-Bey will turn into a Cinderella story (he won’t: he’s a special teamer and decoy at most.) Not knocking DHB, it is what it is and I believe he’s resigned to that fate. But that doesn’t help the Steelers, who released disgruntled Lance Moore this offseason (by the way Lance, how’s that working out?)

But most importantly, Coates gives Big Ben and Todd Haley a reliable WR4, something Pittsburgh rarely used last season due to injuries and inconsistency beyond Brown and Wheaton. Justin Brown failed to become a #3 and was released. Lance Moore said adios and rightfully so, as he was sparingly used. And we already addressed DHB.

In other words, the team couldn’t do much outside of 3 WR sets last season. That could change now. Coates could be that extra body on the field that really opens things up for this offense. (I’ll let your imagination paint the picture.)

Everyone wanted the 3rd round choice to be a DB, but I’m more than pleased with this choice in the 4th. Grant played for the National Champion Buckeyes, after filling the shoes of last year’s first round selection Bradley Roby. Combined with Golson, the secondary gets an immediate boost.

I had forgotten James was still on the board when the pick was made. I was looking at Maxx and Ohio State’s Jeff Heuerman, but with those two going in the second and third rounds respectively, I consider James the consolation prize in what was considered a shallow TE talent pool. James could provide a ton of value as a 5th rounder and has the upside for the risk at this point. He’ll compete with last year’s 7th rounder Rob Blanchflower and UDFA Cameron Clear for a shot at the 53-man roster. Any of those aforementioned could become the eventual replacements for aging Heath Miller and Matt Spaeth. If not, there’s always next year…

The defensive line needed a boost. Not much of a boost, as the starters are likely solidified with Cameron Heyward, Steve McLendon and Stephon Tuitt. I also like last year’s late round choice of Dan McCullers. However, with the departure of Brett Keisel and a suspect Cam Thomas (one of few players I rarely criticize) I felt the Steelers needed to address the depth of the line and get some rotational players. Both Walton and Chickillo appear to help said depth, with the nod going to Chickillo as a potential player who could see a lot of snaps right away, according to many reports (including that of LB coach Joey Porter.)

At this point, everyone was worried about Troy Polamalu retiring and what might come of the current crop of safeties.

I’m not as worried.

Mike Mitchell might be best suited to playing in the box, and we know Shamarko Thomas hits like a house and could trade places with Mitchell. Should Shark’s injury history continue, Will Allen was resigned to be the much-needed veteran depth.

The rest of the Steeler safeties are special teams aces, which leaves Holliman, a player with insane stats but knocked for tackling ability. As many are stating, he could be an absolute steal at this point of the draft, so why not take a flyer? Holliman will get his shot to learn, and if he’s half the ball hawk he was in college, look out!