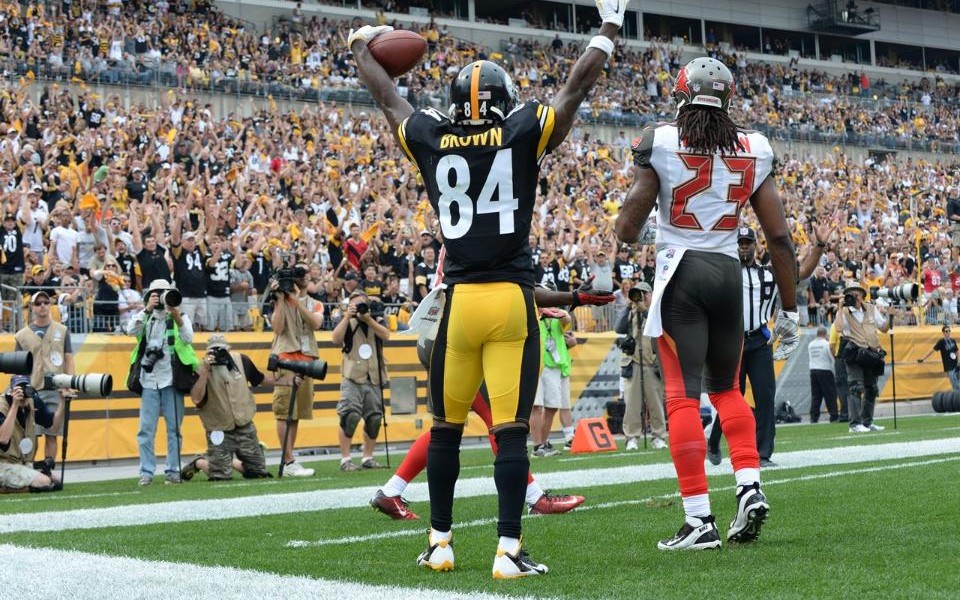 Can Antonio Brown Get Better?

For two seasons, Antonio Brown has been on fire. To expect the types of things Brown has done consistently, over that period of time, would place high expectations on AB. However, high expectations and insurmountable odds are are nothing new to this star wide receiver.

Expectations weren’t always high for Brown, but the odds of him becoming the best at his position, were stacked against him, at the beginning of his NFL career. In 2010, Antonio wasn’t even the first WR the Steelers selected in the draft. That distinction would go to Emmanuel Sanders, who was taken in the third round: Brown would be selected 3 rounds later, in the sixth.

The two rookies would join an already prolific WR corps of Mike Wallace, Hines Ward and as returning Pittsburgh favorite, Antwaan Randle El. While Randle El’s biggest contribution to the Steelers was a Super Bowl gadget play, the other receivers were entrenched in their positions.

Hines Ward is not only one of the greatest Steelers receivers in history, but also one of the NFL all time greats. Ward is the Steelers all-time leader in receptions, receiving yardage and touchdown receptions, MVP of Super Bowl XL, and was one of only eight NFL players to have 1,000 or more career receptions when he retired.

On the other hand, 2010 was Mike Wallace’s coming out party. His 2nd year in the league, Wallace accumulated 1257 receiving yards and 10 touchdowns: both career bests (though he tied his 10 touchdown mark last season.)

The above combination of receivers would lead Pittsburgh to an AFC Championship and berth in the Super Bowl. Brown would be a lowly contributor, with only 16 receptions on 19 targets and no scores. The following season, in 2011, Brown would need to find ways to make his mark. Wallace, Ward and Sanders were still on the roster, and Jerricho Cotchery was signed as veteran depth, as the team was de-emphasizing Hines Ward, who would eventually go on to retire after this season.

Brown, would find his niche as a kick and punt returner, a role which landed him his first of 3 Pro Bowl appearances. However, it was the inability of Emmanuel Sanders to stay on the field, which allowed Brown to not only suit up for all 16 games, but get the starting nod in 3 of them. This afforded Brown a team-high 124 targets, which he converted into 69 catches: 3 shy of Mike Wallace’s team-high. (Sanders would suit up for 11 games, starting in none of them. He received 43 targets but only caught 22 of them.)

While 2011 was a hurdle, 2012 was incredibly critical for Brown, as the team rewarded him with a long-term contract over Mike Wallace. Brown would have to prove to Steeler Nation that he was the correct player to retain, and boy did he ever.

Over the past two seasons, 2013 and 2014, arguably there has been no one better at his position. Brown made 1st and 2nd team All-Pro honors (2014 and 2013 respectively.) He was the co-offensive player of the year in 2014, leading the league in both receptions and receiving yards.

And since 2013, he has set two dubious NFL records:

The latter record, comes on the heels of yet another one: he is the only NFL player to have 1 catch in every game, and he did that twice.

So, the question remains: can Brown get better? My answer is maybe.

AB has surpassed all odds and expectations to become one of the most dynamic players in the game today, but he’s also on a team loaded with various offensive options, such as Markus Wheaton, Martavis Bryant, Heath Miller and Le’Veon Bell. It may be difficult to achieve greater numbers than he has already put up, and that’s something I’m okay with. The Steelers do not need Brown to be better: they just need him to remain as good.