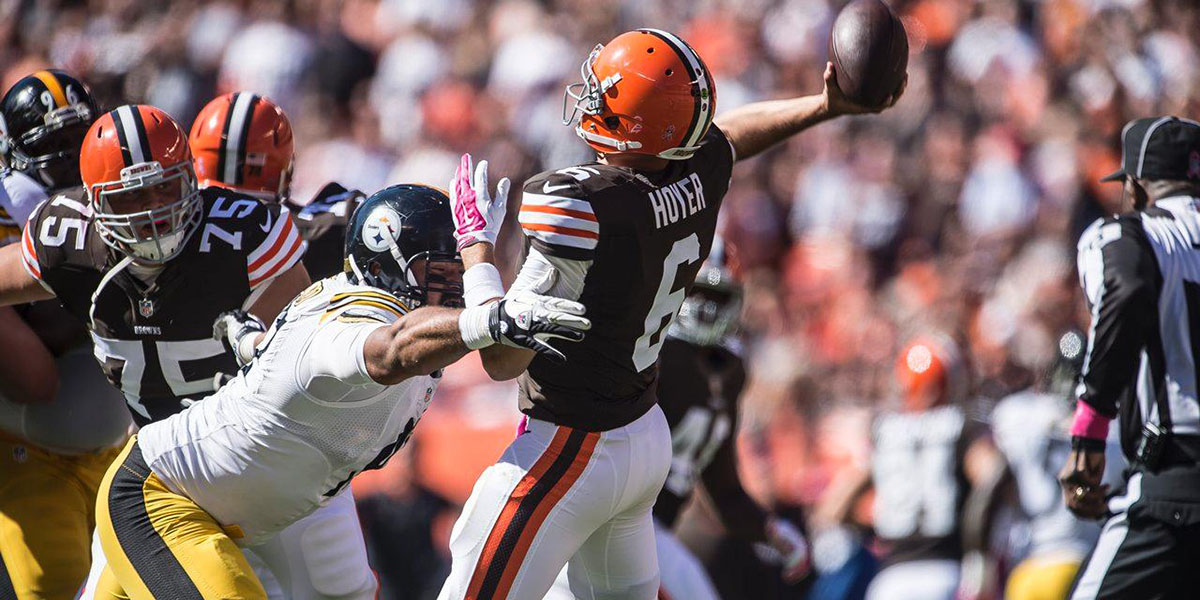 Would Brian Hoyer Be A Good Fit For The Steelers?

Shout it from the mountain: we need a backup for Big Ben!

I have been advocating, off and on, for Pittsburgh to sign a backup quarterback this offseason. Right now, the Steelers have Ben Roethlisberger and Landry Jones on the roster: we can all admit, even in my defense of Jones, that he’s not an NFL capable starter. An okay backup? Sure.

This is a tough pill for fans to swallow, because any mention of a person in a Steelers uniform other than Ben, is usually followed by the words “they suck.” But most backups are backups for that very reason: they aren’t good enough to start.

Quarterbacks Cost Money: A Lot of It

Hence the dilemma of an NFL where some franchises are still searching for their number 1 QB, let alone a backup. Consider that Brock Osweiler left a sure starting position with the Denver Broncos, after winning a Super Bowl, to sign a four year contract with the Houston Texans. The deal is worth $72 million, with $37 million guaranteed and a $12 million signing bonus.

The New York Jets are in a contract squabble with 2015 starter, Ryan Fitzpatrick, who is balking at a $12 million per season deal.

The Cleveland Browns reached out for Robert Griffin III on a 2-year, $15 million pact. Griffin sat on the Washington Redskins bench all of last season, but at least RG3 was a starter, and a former number 2 pick overall in the NFL Draft. Former Kansas City backup, Chase Daniel, who technically has 2 career starts, and has only attempted 77 total passes in the NFL. Daniel signed a contract with the Philadelphia Eagles this offseason for $12 million dollars… to be a backup.

Would Hoyer Take A Paycut? Or A Backseat?

So how does all of this fit into the Pittsburgh Steelers and signing a backup quarterback? Or Brian Hoyer?

That’s where teams like the Denver Broncos or New York Jets could easily swoop in and offer Hoyer something more than Pittsburgh could. Hoyer could not only play for a contender, but have an opportunity to start. Throwing the ball to Demaryius Thomas and Emmanuel Sanders, or Brandon Marshall and Eric Decker, is just as enticing as backing up a future Hall of Fame quarterback, with the chance to toss passes to Antonio Brown.

The carrot that could be dangled to the 30-year-old Hoyer, might be a chance to extend his NFL career. The Steelers aren’t trigger happy on releasing players, and a backup spot to Big Ben should be a coveted position with a certain job security, provided Roethlisberger stays healthy.

Conversely, the Broncos had no qualms about sitting their own future Hall of Fame QB, Peyton Manning, in favor of Osweiler. The Jets have been rotating passers for years, and if they were to sign Hoyer, and it’s obvious early on that he’s not the answer, the New York media will have a field day with him.

Some other options for the former Texan include the Chicago Bears, Dallas Cowboys, Kansas City Chiefs, New York Giants, and Oakland Raiders. All of those teams are looking for a backup. The number 2 position hasn’t been kind to Bears or Cowboys backups recently. The Chiefs are also looking to replace Daniel, and are the only suitor outside of Denver, New York and Pittsburgh, that could offer a legitimate statement on being a contender.

Hopefully it’s the Steelers with whom Hoyer decides to hang his hat.