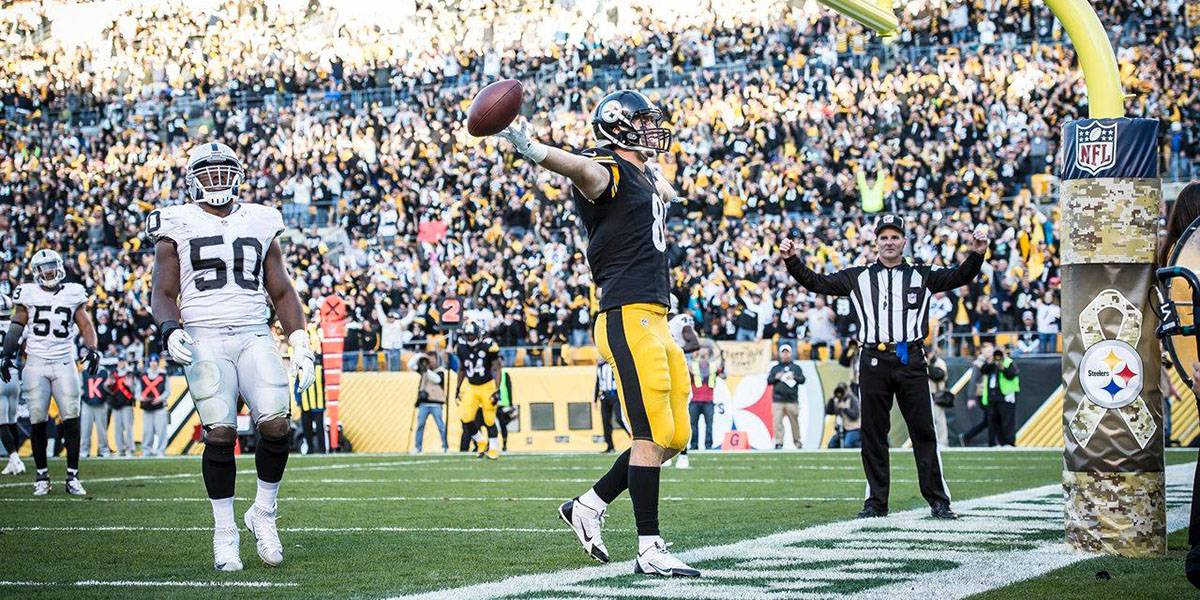 Could Jesse James Be The Steelers Secret Weapon This Season?

Hardcore, passionate Pittsburgh Steelers fans talk about their football team daily. At this time of the year, every aspect of the team has been picked apart, yet, there is one player on the Steelers roster that no one is takling about: last year’s 5th round draft choice, tight end Jesse James.

I know what you’re thinking: okay, why is no one talking about Jesse James? Well, that answer, or answers, is simple: Ladarius Green. Antonio Brown. Le’Veon Bell. Markus Wheaton. Sammie Coates. Plus a handful of other offensive threats on what could be the most explosive Steelers offense to date.

Then the real question is: why aren’t we talking about Jesse James?

For a small period of time a massive spotlight was thrown upon the 6′ 7″ 254 lbs. Penn State product, who appeared to have a short path to becoming a starter after Heath Miller hung up his cleats in March. Miller’s retirement left big shoes to fill. Giant shoes.

Heath Miller was no ordinary tight end. He was a consistent cog in the Steelers offense, arguably becoming the franchise’s greatest TE over since becoming the team’s first round draft choice in 2005, accumulating 167 starts in the 168 games he played; the most by a Steeler tight end all-time. Furthermore, Miller played in all 16 games for 6 of those seasons and never missed more than 2 in any single season. Miller never put up fantasy football numbers, yet ended his career as 1 of 12 tight ends with 6,000 or more career receiving yards. His durability allowed him to amass better than pedestrian numbers, which outsiders would dismiss if not further evaluated. Miller leaves the Steelers as the all-time receptions leader for tight ends with 592. That total is also good for sixth-most among the position in NFL history.

The two-time Pro Bowler exited Pittsburgh as 4th all-time in receiving yards and receiving touchdowns, and only falls behind Hines Ward in categories such as one reception in at least 100 games (103) and seasons with 500 yards receiving or more (9.) He’s also one of only four Steelers to have 500 or more career receptions.

Yet it only took a couple of weeks until James became an afterthought. Since free agency and the NFL Draft were still weeks away, everyone’s attention was focused toward the 2nd year player, and whether he could fill the role left by an all-time great. Then the Steelers signed former San Diego Charger Ladarius Green, to presumably fill Miller’s starting spot. Green, a part-time starter in San Diego (behind potential future Hall of Famer Antonio Gates) put up solid figures in Gates’ absence. Instantly, the focus moved to Green, who appears primed to strike in the Steelers high octane offense. The 6’6″ 238 lbs. athlete could be Pittsburgh’s breakout player this season, catching passes that were not only going to Heath last season, but also Martavis Bryant (who received a year-long suspension, and will leave plenty of targets for Green.) It’s highly likely Green could line up all over the field, much like Jimmy Graham did in New Orleans, where the latter redefined what a tight end is (to the point where the latter’s official position was disputed for the sake of franchise tag money.)

For all of the hype around Green, we all pretty much forgot about Jesse James; for all of the reasons Green could be successful in Todd Haley’s offense, James could benefit from all of the attention the other players will receive. While Heath Miller’s numbers were in decline over the last few seasons, Green or James should easily pick up the slack. A reasonable 3-4 targets per game would still have the Heinz Field faitful shouting “Heeeaaath” though it might be 81, rather than 83, catching passes. (Which is not a stretch of the imagination, considering the same fans have shouted the familiar chant when other tight ends such as Matt Spaeth, David Paulson or Michael Palmer have caught passes in recent years.)

It’s possible that James could end up as an afterthought like those other “Heath imposters” though I’m suggesting Pittsburgh’s goes into overdrive, if James becomes a coveted option in two tight end sets. Unlike Matt Spaeth, James is a solid pass catching option. Though he didn’t start until the ninth game of 2015,James found pay dirt against a porous Oakland Raiders defense, scoring his first NFL touchdown in what was his first game. The remainder of the season, James would be used sparingly, finding his largest production in a 45-10 route of the Indianapolis Colts, catching 3 passes on 5 targets for 30 yards.

James would end the season with only 8 catches on 11 targets for 56 yards, a 2 point conversion and the lone touchdown in the Raiders game, however, he enters 2016 with a high ceiling and a low floor. Miller’s presence and leadership cannot easily be replaced; but no one is asking James to replace the greatest TE the Steelers ever had. That pressure has shifted to Green, the presumed starter by means of a big free agent contract. However, when looking purely at statistics, the Steelers offense is a product of spreading the ball around, something that took a noticeable hit on Miller’s receiving numbers over the last few seasons. In nearly every measurable, Miller ranks among the bottom half of the NFL at his position. His absence won’t lend to as a big of a hole as his peers, such as Rob Gronkowski or Greg Olsen.

The Steelers offense is also a beneficiary of more than enough capable hands. Antonio Brown continues to shatter receiving records. One of the NFL’s best receiving backs, Le’Veon Bell, returns from injury. A cast of weapons such as Markus Wheaton, Darrius Heyward Bey, and Sammie Coates will also stretch the field: something that should open up opportunities for James.

Quite frankly, who do you cover in this Steelers offense?

Last season, the Steelers ran 11 personnel (1 RB, 1 TE) for over 65% of their offensive plays. Despite those odds placing him on the sideline more often than not, teams will now have to respect Pittsburgh’s 12 personnel, should James wrest snaps away from Matt Spaeth, who has almost exclusively been used as a blocking tight end for his entire tenure with the Steelers. Since returning in 2013, Spaeth has a total of 7 receptions on a meager 10 targets in 35 appearances (including playoff games.)

James having surpassed Spaeth’s numbers, in 10 games, suggests the Steelers are more comfortable with him as a pass catcher than the veteran. If James works on blocking skills, he could be utlized on virtually any down, particularly as a large target in the redzone. Those opportunities could provide the offense with another touchdown maker, which when combined with Green, should easily plug the gap that Heath, and Bryant, leave behind.

This might make James Pittsburgh’s secret weapon; an added piece of an already deadly offensive unit.