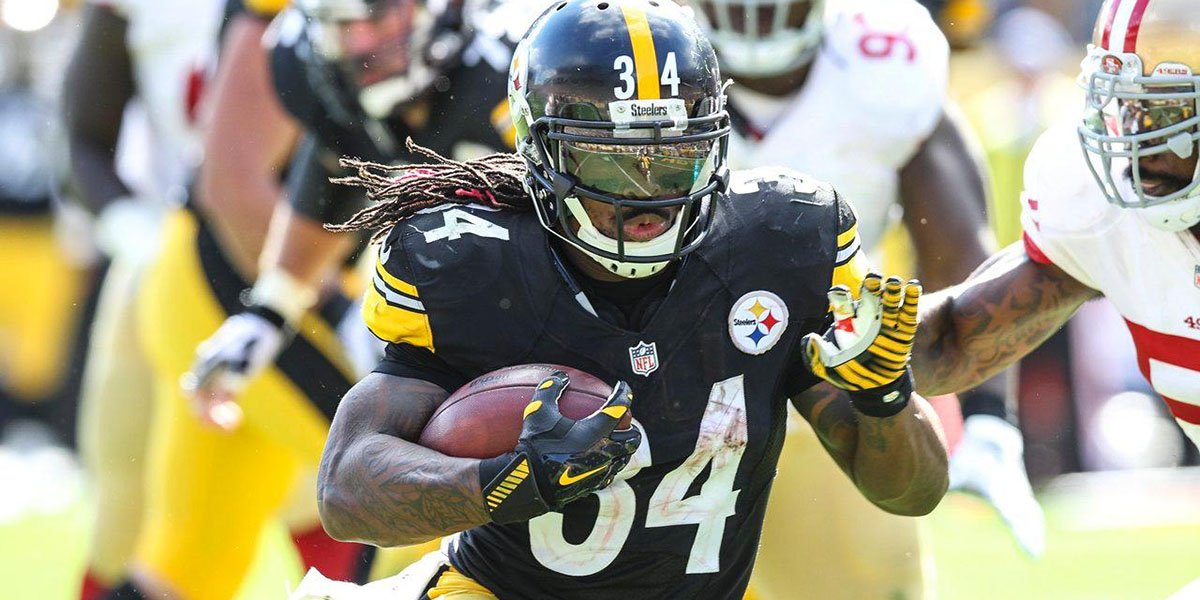 What better way to celebrate the OTAs than to start predicting what’s going to happen in the preseason.

You know the drill:

So forth and so on the predictions go; and who better to join me than my friend Eric Herrmann, who finds himself on the other side of this “dueling” topic. We broke the topic down into two editions, examining both sides of the ball.

In this edition, Eric and I will pick apart the Steelers offense. (Warning: these predictions aren’t for the faint of heart!)

Who will be the biggest acquisition for the Steelers offense in 2016?

Ladarius Green by far is the biggest addition to the offense. Likely the top tight end in free agency, Green will be expected to carry the torch passed on by the departing Heath Miller.

I think the biggest obstacle for Green will be his health, which, getting this surgery on his foot done early, is like a necessary maintenance to your car. I believe he’ll be good to go for the season and with enough weapons around him, not only will he excel, but the pressure to perform won’t be too great either.

The most obvious pick in this list. Many were surprised when the Steelers went out and signed Green, the new-age athletic tight-end. I myself called bull-crap when the rumors were surfacing about interest in him, and though surprised, I was very glad to be wrong. Green is a huge addition to this offense.

Though Heath Miller is a Pittsburgh legend, his play last year wasn’t merely solid. Green is an instant upgrade to this tight end group. A big asset to his game is his versatility. Not only will he be used to replace Heath Millers role in this offense, he will be able to fill in the gap left by Martavis Bryant with his speed, size, and play-making ability.

Many people tend to write off Darrius Heyward-Bey, and you really can’t blame them. After being a first round pick years ago he has never lived up to potential. He bounced around a few teams, but made a home in Pittsburgh with surprisingly solid play.

Most people assume Sammie Coates is going to step up immediately and fill in the gap left by Martavis Bryant, but it’s very likely DHB will assist with that role. During the 2015 divisional game versus the Broncos, DHB finished the with 2 receptions for 64 yards and played 32 snaps. Coates finished with 2 receptions for 61 yards and 25 snaps. The Steelers also locked up DHB on a 3 year contract this offseason after many assumed he’d only get a 1 year deal. The Steelers clearly like DHB, and though Coates will likely contribute more than him, I could see DHB getting more playing time than many expect.

We may have already seen this last season, but “Big Al” Alejandro Villanueva could be this year’s biggest overachiever, with the opportunity to take over as the full-time blindside protector for Ben Roethlisberger.

The reason I feel he’s an overachiever, is that Al went from being a street free agent with a great background story, fighting for a roster spot, to starting 10 games last season. If he becomes a 16 game starter and adequately protects Big Ben, he will have surpassed similar expectations made to a former 2nd round draft choice, Mike Adams. That’s truly a remarkable feat, if accomplished.

Which offensive player will fail to live up to fans’ expectations?

Williams turned 33 in April, and has always struggled staying healthy for 16 games. That’s not to say I don’t feel Williams still has a lot to offer. I just feel his numbers will be down.

He will still be a dynamic contributor, a compliment to starter Le’Veon Bell, but Bell will prevent Williams from racking up the same reps he got in Bell’s absence. Thus, he will fail to make the same kind of impact as he did in 2015.

Unlike Joe, I had a lot of hesitation here. This was the hardest for me to choose. Steelers fans are spoiled; we expect excellence every season, but rightfully so because we are fortunate to be fans of the best franchise in the NFL. In recent history, the Steelers have been fantastic at drafting wide receivers in the mid rounds. Because of this recent trend, many expect Sammie Coates to blow up in 2015.

I think Coates will receive significant playing time and contribute to this offense in 2016, but I’m unsure whether or not he’ll have the impact many hope for. Though he flashed his potential during the Broncos playoff game, that little taste doesn’t have me convinced he will be great in 2016. As I wrote earlier, it wouldn’t surprise me for him to share reps with Darrius Heyward-Bey.

Alejandro Villanueva played very admirably in 2016. When asked to step up when Kelvin Beachum got hurt, he surprised many with his consistent play. Kelvin Beachum left for the Jaguars this offseason and Villanueva will likely be the starting left tackle in 2016.

The Steelers didn’t keep their search for tackle depth a secret this offseason. Bringing in Russel Okung for a visit and ultimately signing veteran Ryan Harris. Harris will provide quality and needed competition for Villanueva. The Steelers also drafted tackle Jerald Hawkins in the 4th round in this years draft. All of these factors give the impression that the Steelers may not see Villanueva as a long-term answer. I don’t think Villaneuva will be on the hot seat in a fight to maintain his spot on the depth chart, but rather he’ll need to prove that he can be a long-term starter for the Steelers.

Drafted as the replacement for Mike Wallace, Markus Wheaton has had several quiet years in Pittsburgh. I feel this year is the make-it-or-break-it for the former 3rd round pick, who can still play any of the X, Y or Z spots on the field, but hasn’t had quite the breakout performances of Martavis Bryant, nor as consistently.

Since this is a contract year for Wheaton, and Bryant is suspended for the year, the pressure mounts on Wheaton to raise his game. The question is, will he? And will the Steelers be able to, or willing to, retain his services following a breakout season? (See: Emmanuel Sanders.)

Todd Haley likes his versatile pass catchers, however, David Johnson won’t have high expectations. He was brought back to the team to replace a similar Johnson, Will Johnson, who played as a blocking fullback and often lined up alongside the tight ends.

I could see a glut of receivers, linebackers and defensive backs forcing the teams’ hand in making a tough call on having two fullbacks, or 4 tight ends, on the final 53-man roster at the end of August. Johnson’s veteran minimum contract is cap friendly, with no guaranteed money at risk if the Steelers end their relationship with him.

Matt Spaeth has played his role perfectly during his time in Pittsburgh. He has been our #2 tight end and has focused primarily on blocking; his efforts in this area deserve credit for the high quality of the Steelers rushing attack last season. Despite all of this though, Spaeth is getting older (age 32 – 33 in November) and he has struggled with injuries in his career.

A big issue is his versatility. Jesse James and Ladarius Green are two tight ends on this roster who are both proficient in blocking as well as catching, where Matt Spaeth is mostly limited to just blocking. David Johnson was also signed by the Steelers this offseason. Though it’s uncertain how is blocking compares to Spaeth, he brings much more versatility by being able to play tight end, full back, and contribute on special teams. Though still being a very proficient blocker, Spaeth’s age, injury history, and lack of versatility may make it hard for him to make this roster.

Who will be the breakout star with the Steelers offense this season?

The playmakers that get all the attention in Pittsburgh are Antonio Brown, LeVeon Bell, & Martavis Bryant. The guy many tend to forget about is Markus Wheaton. Wheaton started off the season last year slow, but came through with some solid performances near the end of the season, highlighted by his performance against the Seahawks where he had 9 receptions for 201 yards and a touchdown.

With Bryant gone for the 2016 season, Wheaton has the perfect opportunity to have a breakout season. He has shown he has the ability to be great receiver in this league, he just needs to put it all together. Look an Emmanuel Sanders for example. Nobody expected him to blow up in Denver, I myself was ready for him to leave Pittsburgh. I don’t see any reason why Wheaton can’t blow up in 2016 and potentially become a star.

We saw very little of last year’s 3rd round draft pick during 2015, but what little we did see of Sammie Coates on the field, he showed flashes of being as brilliant as other Steelers receiver picks in the recent past. Richard Mann, a WR coach with 31 years of experience, has been the Steelers WR coach since 2013. He helped put together Antonio Brown’s record-setting seasons, as well as tutor players such as Emmanuel Sanders, and Martavis Bryant.

Simply put, the Steelers are a receiver factory and know how to place players into the system which produce on the field. There’s no reason to believe Coates is incapable of doing the same.