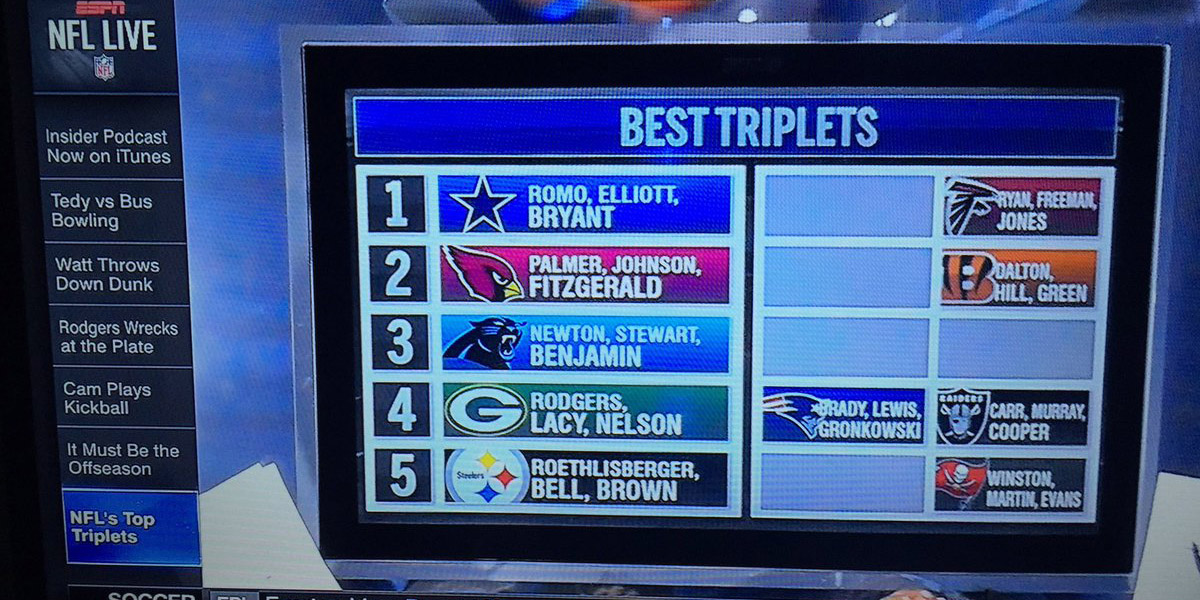 This is the type of stuff that drives Yinzers to yinz! ESPN broadcasts a segment on “Best Triplets” in the NFL; that is, the best combination of a quarterback, running back and wide receiver. For example, the Steelers “triplets” would be Ben Roethlisberger, Le’Veon Bell and Antonio Brown. (You could even make a case for DeAngelo Williams if you wanted to.)

For Steelers Nation, we all know we have a future Hall of Fame QB, a record-shattering WR, and a RB, when healthy, who is arguably the greatest in the game.

The dolts at ESPN who made their triplets rankings, however, think there are four more sets of triplets better than the Steelers trio!

ESPN has lost their damn mind! Best Triplets in the NFL are Roethlisberger, Bell and Brown by a long shot! #Steelers pic.twitter.com/B32Uj57EHy

I have to agree with the admins of Twitter handle Blitzburgh, that ESPN has indeed lost their minds. Let’s examine each trio to see why:

Okay, this ranking is clearly pandering to the large Dallas market, with their “America’s Team” marketing. ESPN has always been about Dallas, New York, Boston, Chicago, etc. I know that argument doesn’t necessarily hold water against the other teams ranked ahead of Pittsburgh, but it’s the only explanation for the constant disrespect of 3 of the games greats in Big Ben, Juice and AB.

I know a lot of people had the Cowboys ranked highly going into 2015 (myself included) following one of their best seasons in years in 2014. With multiple injuries and setbacks last season, those same people feel the Cowboys can bounce back (myself included.)

However, to claim that Romo, Elliott and Bryant are the best triplets in the league? No way.

Injuries plagued Tony Romo, who played in only 4 games last season. He threw for 884 yards, 5 touchdowns and 7 interceptions. Romo hasn’t thrown for more than 4,000 yards in a season since 2012, the last year he played in all 16 games.

Dez Bryant also caught the injury bug, limited to playing in 9 games, tallying 31 catches for 401 yards and 3 scores. Bryant failed to catch more than 5 passes in any game, and only eclipsed the century mark once in those nine. The previous season, Dez played in all 16 games, amassing 88 receptions for 1320 yards and 13 TDs.

Zeke Elliott, the top RB selected in this year’s draft, was a standout collegiate player at Ohio State, but hasn’t played a down of pro football. The 4th overall selection could draw comparisons to Todd Gurley, last year’s top selected back, who had a solid rookie outing. Or he could end up like other recent first round busts, such as Trent Richardson or Melvin Gordon, who struggled to make their mark. (I will put an asterisks on Gordon, who has only played a single season in the league.)

While the safe money is on Elliott producing numbers similar to what DeMarco Murray did with the Cowboys in 2014, it’s far from a forgone conclusion, with a backfield which features last year’s part-time starter Darren McFadden, and free agent acquisition Alfred Morris.

In other words, if Zeke isn’t guaranteed to be an every down back, how can a rookie be better than Bell… or any of the names to follow?

Going by 2015 alone, Carson Palmer had a tremendous season, throwing for 4671 yards, 35 TDs and 11 picks. He played in all 16 games after an injury forced him to miss all but 6 in 2014. Palmer appears to be a round peg which fits into the round hole of the Arizona offensive scheme, yet, in 2013, his last full season prior to 2015, Palmer threw 22 interceptions to 24 touchdowns. Prior to joining the Cardinals, the now 36 year old QB was practically out of the league, abandoned by Cincinnati Bengals, and toiling with the Oakland Raiders (where he compiled a 35/30 TD/INT ratio in 25 games.)

The reason all of this is important? Consistency.

If you’re going to claim a group of players is better than the next, there should be consistent numbers to back up that claim. Unfortunately, inconsistency is label bestowed on Larry Fitzgerald as well, another member of this trio.

The 32 year old Fitzgerald returned to form in 2015, gaining over 1,000 yards in a season for the first time since 2011. It was also the third time he reached 100+ catches in his career. Previously, Fitz appeared to be in decline, catching only 63 passes in 2014 with 2 TDs. While some of that could be attributed to quarterback play (with Palmer out 10 games) it didn’t stop Fitzgerald before. (By contrast, Antonio Brown played with Michael Vick and Landry Jones for the better part of 5 games last season, without missing a beat.)

As for the running back position, it doesn’t matter if it’s Chris Johnson or David Johnson in the Cardinals backfield. It’s common knowledge that Chris Johnson is very inconsistent, despite one of his better seasons in years. C. Johnson ran for over 100 yards four times in 9 appearances with the Cardinals last year, more than he ran in the previous two seasons combined.

David Johnson was a promising rookie who scored in gobs last season. He’s a talented athlete that could draw comparisons to Bell, though Cardinals Head Coach Bruce Arians was determined to play anyone but D. Johnson, anointing Andre Ellington as the starter, then signing Chris Johnson to the team, considering Ellington’s injury history.

It will be interested to see if David Johnson could be a three down back, but like Zeke Elliott, he will compete for touches; unlike Le’Veon Bell, who received the lion’s share of carries even with a competent backup in DeAngelo Williams, who is more than capable of sharing the load.

The inconsistent Cardinals triplets are definitely not better than the Killer B’s.

It took DeAngelo Williams leaving the Queen City for Jonathan Stewart to finally have a breakout season.

All considering, Stewart was no longer in a time share, but still sat 3 games in 2015, to heal from injuries, or simply for rest, as the Panthers ran roughshod on the NFC to a 15-1 record. As the featured back, Stewart still failed to achieve 1,000 yards rushing, something he’s only done once in 8 seasons (2009) while having not appeared in all 16 games since 2011. He’s seldom used in the passing game, having caught 16 passes in ’15 and 25 in ’16.

Cam Newton finally lived up to his Superman moniker, with 3,837 passing yards and his best TD-to-INT ratio to date (35-10.)

Steeler backups Michael Vick and Landry Jones were both in the same ballpark (believe it or not) with 60.6% and 58.2% averages respectively. Ben Roethlisberger completed 68% of his passes, with his worst season matching Newton’s 59.7%. Ben’s TD-to-INT ratio in 2015 nearly matched Cam’s rookie season, but with 4 less games and 48 less attempts.

Kelvin Benjamin has exactly one NFL season under his belt, having missed all of 2015 after being placed on IR after injuring his knee in training camp. He looks to bounce back to his rookie statistics of 73 receptions 1,008 yards and 9 touchdowns.

If there’s one other fan base that should be upset about the three teams being ranked above them, it’s the Packers.

Aaron Rodgers is without a doubt one of the best quarterbacks in the league. At times, he is the best quarterback without question, yet, his numbers took a dive in 2015 though he played in all 16 games. Rodgers’ completion percentage, yards, and touchdowns were all down from 2014, while he threw 3 more interceptions, which included breaking his streak of not turning the ball over at Lambeau Field.

While Rodgers is arguably in best contention with Big Ben with the QB third of the triplets debate, the comparisons between Eddie Lacy and Le’Veon Bell stop at both being drafted in the 2nd round of the 2013 NFL Draft. Lacy showed up out of shape last season, started slow, and was ultimately benched for James Starks. Lacy still started 12 games, while appearing in all but one. He ran for 758 yards, scored 3 rushing touchdowns, and caught 20 passes for 188 yards and 2 receiving touchdowns.

Bell rushed for 556 yards, scoring on 3 rushing touchdowns while catching 24 passes for 136 yards: in 6 games.

Like Kelvin Benjamin, Jordy Nelson had an incomplete grade for 2014, missing the entire season after being placed on IR from an injury sustained while playing against Pittsburgh in the preseason. When healthy, Nelson is one of the most targeted receivers in the league. In 2014 he compiled 1,519 yards receiving on 98 receptions, with 13 touchdowns.

For the moment we’ve all been waiting for: how do the Steelers triplets stack up with the competition?

I really thought the knock on the Steelers would be injuries. However, consider the following:

I find it somewhat insulting that injuries would factor into ranking these groups, when the 4 units listed above Pittsburgh have as much, or more injury concerns. Even with Bell missing 10 games, he nearly outperformed both Johnson and Lacy. His replacement, DeAngelo Williams, was arguably more productive than Stewart as well.

Depending on the statistic you want to spotlight, Roethlisberger outshines his competition. His completion percentage was better than all but Romo, who threw 1/4 of the same attempts. Romo also threw more picks than touchdowns.

Rodgers had a lower QB rating than Ben, who also bested Cam Newton with passes completed on less attempts. You could possibly make the argument that Palmer had a better season, but Rodgers took a slide, plus was sacked twice as often. He just wasn’t as effective in 2015.

Then there’s the receivers: is there seriously anyone better than Antonio Brown?

That question can go unanswered, with Brown shattering league records, with and without Ben under center. Considering the inconsistent Fitzgerald still didn’t match up to Brown’s 2015 numbers, Dez Bryant all but vanished without Romo, and the other 2 receivers didn’t play last season, AB is the unanimous choice in this category (and may have been, even if Nelson and Benjamin did play last year.)

This amounts to a giant screw up and blatant disregard for what could be the next “greatest show on turf.” The Steelers offense is loaded with talent, but their “triplets” are without a doubt, the best trio in the league today.