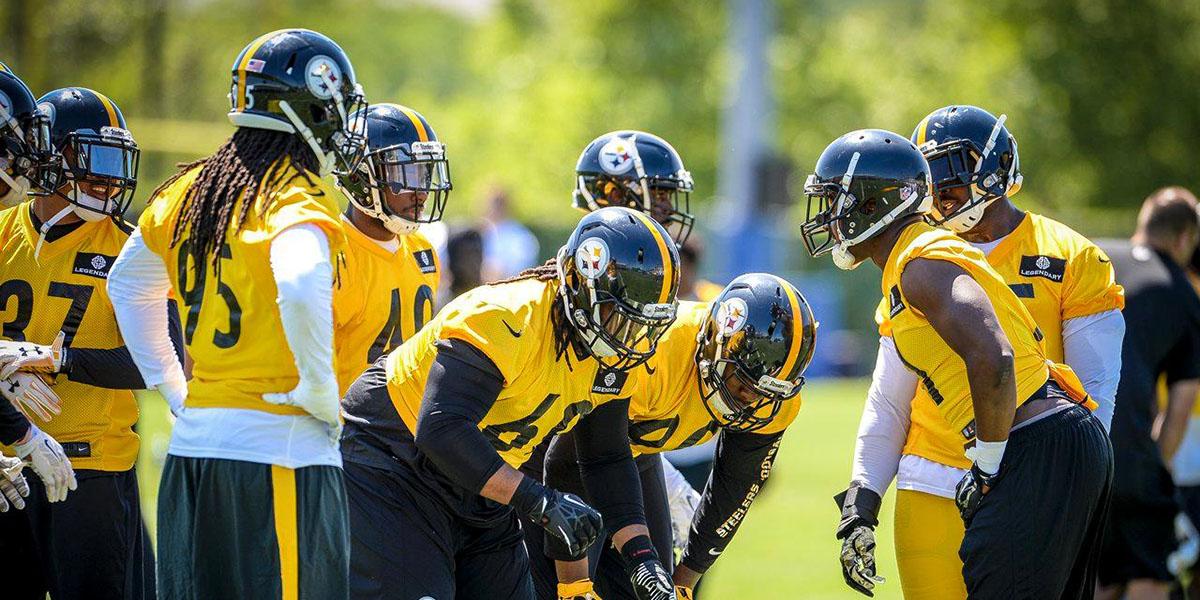 6 way too early predictions for the 2016 Pittsburgh Steelers defense

Some things to keep in mind while reading: It’s still early. Things change. I haven’t lost my mind (yet.) My Magic 8-Ball is blurry and hard to read…

With that said, let’s look at the not-so-obvious choices of who will rise above, or fall below, the Steelers standard, in 2016.

Who will be the biggest acquisition for the Steelers defense in 2016?

The offensive side of the ball didn’t have very many new faces added; therefore, the choice in this category was fairly obvious. The defense, however, has undergone an extreme makeover. There are up to 4 new players (counting Senquez Golson as new) who who could see significant time on the field this year. This is in stark contrast to prior years, where the coaching staff was stingy with playing young players. Because that philosophy has changed, this might be the toughest question to answer. I think Artie Burns gets on the field first, out of the all of the rookie additions, but it’s Javon Hargrave who will have the biggest impact by the end of the season.

The Steelers had a need at nose tackle and defensive end, and they got both with Hargrave, who doesn’t have much competition at the former. Last year’s nose tackles, Steve McLendon and Cam Thomas, both left Pittsburgh via free agency. The last man standing, 2014 6th round draft selection, Daniel McCullers, remains. McCullers has appeared in 21 games for the Steelers over that time, but was only featured in 9.5% of the team’s defensive snaps in 2015, less than McLendon’s 34.2% or Thomas’ 16.9%.

While “Big Dan” could certainly stake a claim in the rotation this offseason, it’s a safe bet the Steelers were looking at competion at the position, along with someone who could spell their ends. Due to sub packages, neither McLendon or Thomas were featured as much as Cameron Heyward and Stephon Tuitt, who played a whopping 88% and 78.6% of all defensive snaps. A traditional nose tackle is no longer a 3-down player in Pittsburgh’s system. While the competition for the traditional nose tackle position may appear to be between Hargrave and McCullers, Pittsburgh needed a 3-down player. In Hargrave, Keith Butler has a player who could stay on the field, or give Heyward and Tuitt rest; something that was impossible to do at times last season.

Those factors should give Hargrave more opportunities at playing time from the start of the season. The South Carolina State product was incredibly disruptive in college, and could be a force on his own, but with those two bookends, we could see Hargrave give the entire front 7 a giant boost, either opening up play for the linebackers, Heyward and Tuitt, or the latter two creating opportunities for himself.

The Steelers were fixated on drafting defenders this year, and with many new faces who will have a chance to start, one of them is not a rookie. While I feel Sean Davis can be a Day 1 starter, I think the safe bet might be on Robert Golden surpassing anyone’s expectations.

The undrafted safety was entering his fourth season, a contract year, and was thought of as nothing more than a special teams mainstay. Entering his fifth year as a pro, Golden will compete to start, after starting 3 games last year in relief of the departed Will Allen. Golden seemingly came out of nowhere to earn more snaps than Brandon Boykin (35.2% to 24.7%) playing in both nickel and dime situations as an extra DB.

Golden, like Davis, may find himself in necessary roles in nickel or dime packages as well, however, I believe the Steelers will rely on a veteran presence early in the season, over a first-year player. In fact, if Golden does overachieve, we may not have a reason to see Davis on the field in 2016.

That would be a pleasant surprise for a secondary that ranked 30th in passing defense last season.

Which defensive player will fail to live up to fans’ expectations?

Before I mention the who, I must mention the what: expectations from fans typically outweigh what happens on the football field. Dare I say Steelers Nation is a spoiled bunch, who get to grow with players throughout their careers. Sometimes it’s difficult to temper expectations, and that is the case for both editions of the “way too early” predictions.

For the defensive side of the ball, I believe James Harrison will be the player who is put on a pedestal by fans, but may fail to live up to the billing. That’s not to say Harrison is not a great player, a veteran leader, or capable of meeting those expectations, However, like DeAngelo Williams on offense, I feel the reps may not be there for Harrison, who has turned into a rotational player, and hasn’t logged as much time as in past seasons. That will keep the Silverback fresh, but also limit his production at the same time; very similar to how I felt about DeAngelo Williams in the offensive portion of this discussion.

In 2015, Harrison still logged the 3rd-most defensive snaps of all Steelers linebackers with 55.1%, signficantly less than Lawrence Timmons (95.3%) and Ryan Shazier (60.1%) yet more than, Bud Dupree (50.8%) Arthur Moats (50.0%) and Jarvis Jones (40.9%) the latter with whom Harrison rotates with on the right side. With Jones’ clock winding down in Pittsburgh (see below) it will be interesting to see if the coaching staff leans on the 38-year-old veteran, or the former first round selection and soon-to-be free agent.

2016 is likely James Harrison’s final year in the NFL, and well I feel he’s still going to go out with a bang, we should also realize he’s no longer the every down, double digit sack master he used to be.

Jarvis Jones is on the hot seat this season. Jones is easily the most disappointing first round draft choice the Steelers have made this decade. Part of that comes with an inability to stay healthy in his first two seasons, the remainder is due to having accrued only 6 sacks in 39 games (one of those sixth coming against Bengals, in the Wildcard game.)

Things are not looking any rosier for 17th overall pick of the 2013 NFL Draft. The team declined to exercise Jarvis Jones’ 5th year option for 2017. That option would’ve paid Jones in upwards of $8 million for one more year in Pittsburgh, which the front office isn’t sold on spending on a thus far unproven talent.

At least not yet.

The Steelers weren’t willing to dish out a boatload of money for a far more productive player, Jason Worilds, several years ago. Worilds received a transition tag for one season, and then was allowed to pursue free agency, which never materialized as he opted to retire at a young age. We could see a similar situation with Jones, who will have to become the player he was expected to be when drafted.

Health has been an issue for Jones, so if he can remain in games I feel he might be up to the challenge, as many Steelers edge rushers have taken several seasons to fully hone their craft. This could be the year Jarvis breaks out as a force on the defense. However, if he cannot beat out his teammates for playing time, and fails to improve upon his past numbers, there’s no need to keep a pass rusher who cannot rush the pass. Jones could be jettisoned following the 2016 campaign, and therefore, is under the most pressure to perform this season.

If Ross Ventrone had a consistent roster spot, he would be my choice. Ventrone, who has been released and resigned something like 14 times in his career, is a far better special teams player than my choice for this section: Shamarko Thomas.

The Steelers maneuvered to make the former fourth round selection Troy Polamalu’s replacement, something that has never materialized due to injuries and lost opportunities. Thomas failed to win the starting job from Will Allen last season, and even made way for Robert Golden to “steal” his spot (a spot that was Shamarko’s to lose, as he was annointed with opportunities, but failed to capitlize on them.)

This left Thomas to trying to make his mark on special teams, but instead, he missed the mark with mental mistakes which hurt the team.

If you can’t crack the defensive unit’s rotation, and you can’t contribute as a special teams player, you’re going to find out the NFL is a very unforgiving place. There are dozens of other players waiting to take anyone’s spot at any given time. Even with a lack of safeties on the roster, it’s entirely plausible the team cuts ties with him following training camp.

Who will be the breakout star with the Steelers defense this season?

For the lack of promise Jarvis Jones had displayed, Bud Dupree has been the polar opposite. Entering is second season, Dupree showed flashes of being a classic Steelers edge rusher with 4 sacks during his rookie campaign, including one in each of his first two career games.

Unlike the uneven split of reps between Jones and Harrison, Dupree practically shared an even split with Arthur Moats on the left, edging Moats by .8%, which suggests the coaching staff felt comfortable using Dupree in multiple game situations, despite being a first-year player. In his second season, I would surmise that Dupree will be entrenched in the system, and utlized far more than 2015. He’s ready to make the leap, as the team is less committed to keeping the training wheels on their younger players, unlike when Dick LeBeau was running the show.

Dupree should burst onto the scene as a major player in 2016.