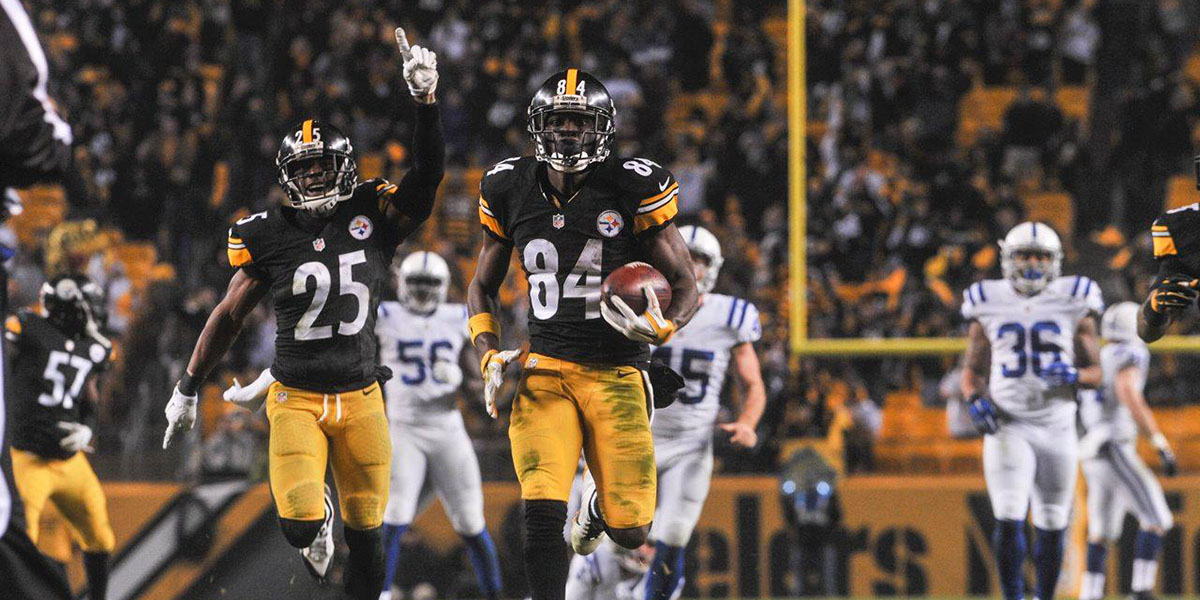 Steelers not alone in using major player as punt returner

There have been reports over the last few weeks about the Steelers hoping to replace Antonio Brown as the teams primary punt returner. Many fans and news outlets are in favor of this, arguing that using Brown as a punt returner puts him at risk of injury and it isn’t worth the gamble.

The Steelers have been forward about saying as much, going as far as to draft players such as Dri Archer and most recently, Demarcus Ayers. While we don’t know how Ayers might turn out (or if he’ll even make the team) we already know the outcome with Archer: it was a failure.

This begs the question: should the Steelers bother replacing their All-Pro wide receiver on punt return duties?

Tomlin wasn’t afraid to experiment with 2-point conversions, and he’s also run the risk of calling questionable plays at specific downs, yards to go and times of the game. Yet, he’s one of the most successful NFL coaches in recent years, underrated among his peers. Tomlin understands the risk is worth the reward, and with one of the most electric returners in the league, perhaps Pittsburgh shouldn’t fix, what isn’t broken.

This hasn’t stopped the criticism externally, though many fans may not realize how many “star” players around the league also share the responsibility of returning punts. Several teams in the NFL used major players as punt returners in the 2015 season:

All of these players were arguably the best, or one of the best, at their positions for their teams in 2015. Despite several of them being top tier in the NFL, their respective coaches weren’t afraid to utilize them as punt returners, because they understand they were the best players for the job.

The Arizona Cardinals are probably the best example. Patrick Peterson is their #1 cornerback and arguably the best in the league, yet Bruce Arians continues to allow him to field punts. Like Tomlin, he doesn’t live in his fears and puts the best man on the field.

Emmanuel Sanders is Denver’s WR2, splitting time as a slot receiver, but would be regarded as a WR1 on many NFL teams. Jarvis Landry is the default top option in Miami, while Ted Ginn Jr. filled the same role in Carolina with Kelvin Benjamin‘s year-long absence. Golden Tate will inherit the top receiver duties from a retiring Calvin Johnson, as a player in a similar role to Sanders, and Pacman Jones continues to be a top corner in the league like Peterson.

Going back in time, Hall of Fame WR Tim Brown also pulled double duty, as did fellow enshrinee and former Steeler Rod Woodson, who did so for 8 years, up until a knee injury forced Pittsburgh to field a replacement in 1995.

The camp between “yes” and “no” as to whether AB should return punts even fields a split in comments from the coaching staff to the media. Mike Tomlin is quoted as saying, about Brown:

“Why would I relieve him of that (laughing)? No. It’s a way for him to impact the game. It’s something that he enjoys doing and is very, very good at doing. It’s an asset to us and one that we’ve gone to in the past and may continue to go to in the future.”

It’s clear as well Tomlin is a fan of Brown’s ability as a punt returner, and rightfully so. Throughout his career Brown has averaged roughly 10 yards per punt return. He’s also proven to be a smart decision maker – not taking unnecessary risks or putting himself in dangerous situations. Though he may kick a Brown, or straddle a goal post every once in awhile, he hasn’t given us a reason to relieve him from this role.

As witnessed in the Denver playoff game, the Steelers have little depth behind Brown, in terms of returners. Markus Wheaton had a combined 20 yards in place of Antonio, something which may have prompted the team to explore new options, whether it be as a full-time replacement, or a backup plan.

As of now the main candidates to replace Brown are Eli Rogers and Demarcus Ayers. Both players have experience from returning punts in college and appear to be able to fill the role admirably, but surely neither are better than Brown. Steelers special teams coach Danny Smith had this to say about Ayers, a seventh round selection in this year’s NFL Draft:

This is a dynamic kid, Demarcus Ayers. I’m excited about it, very excited about it. He is an excellent punt returner. We had him rated number one on our list as far as returners were concerned.  Not taking into play, wide receiver skills in this setting, he is outstanding and he does a great job. He has a lot of special skills. We are excited about it.

This may suggest Ayers’ or Rogers’ primary role in the punt return game should be as back-ups, but statements like this, from Smith, still fuel speculation as to whether Brown will be removed from special teams:

You asked the wrong guy that question. I’m coaching that position. I am a team guy and this is a team organization if there ever was one… In direct answer to your question, you want to put the best player there. I can tell you that last year we went with the Jacoby Jones experiment. At that particular time, we made that decision to make that change. After that meeting, Antonio Brown came to my office very distinctly and said, “Danny, I don’t like it.”

My honest comment was, “Antonio Brown, I don’t like it either but that’s what we are going to do.”

That’s what we did. It didn’t work and we went back to Antonio Brown. You can never have enough of these kinds of guys. You can never have enough of punt returners. We are not ready to give this kid the position by no means. He is a seventh-round draft choice but I think he has an excellent skill level. He will be competitive at the position. I’m not a guy that’s a part-time guy either. You put a guy back there with the capabilities and just put him in critical situations and you expect miracles. I don’t think that happens really often. I think special skill you have to use, you have to work it, you have to commit, you have to develop guys and they have to practice. That’s a roundabout way to answer your question. You asked the wrong guy as far as. I’d love Antonio Brown back there. What we will do with it is we will see as the season progresses.

Not exactly a clear answer, however, if Brown is the best punt returner, he should continue to return punts: risk or no risk.