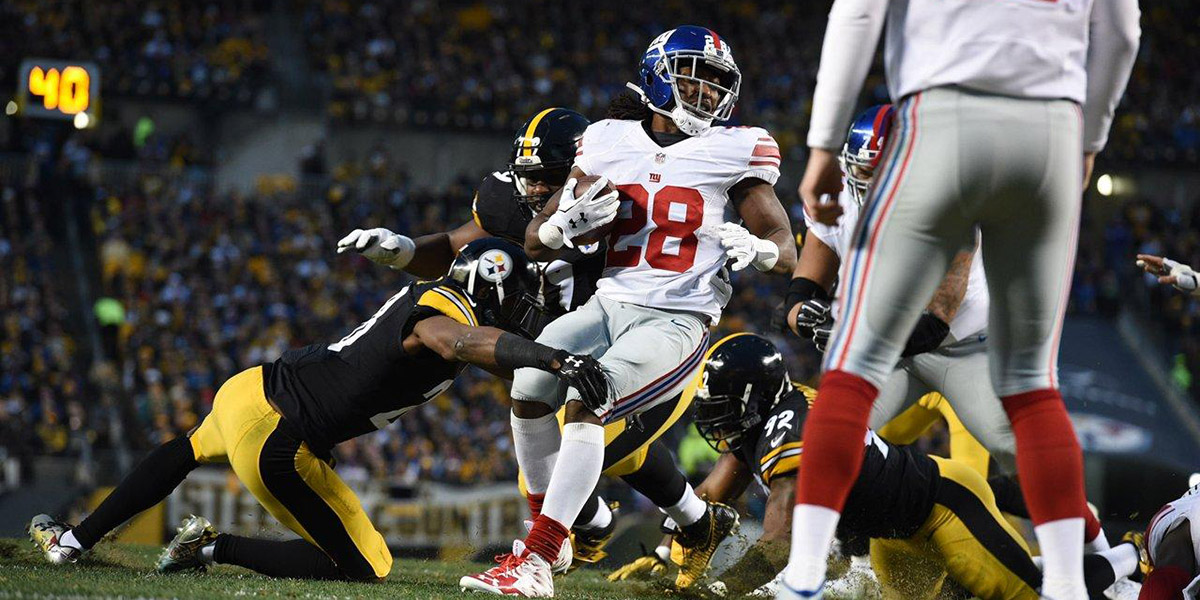 Snap counts for Steelers against Giants

Pittsburgh rolled to their third straight victory by depriving the New York Giants of their seventh straight. This game continued a lot of similar themes from the previous wins, with a tremendous showing by the Steelers defense.

Here is the breakdown of the offensive and defensive playing time for each unit.

Once again the “Killer B’s” of Ben Roethlisberger, Le’Veon Bell and Antonio Brown all played the entire game: with exception of one snap at the end.

As per usual, the offensive line remained intact for every single down once again. This lead to the Steelers keeping Ben (mostly) upright for the afternoon, only surrendering 2 sacks.

All three players proved to be a handful, with Green having a career game with a team-high 11 targets. Rogers only had one catch, but also had a big play negated by a “pick” penalty called against Green. (James also rumbled his way to 3 catches for 32 yards.)

The receiver rotation saw multiple tight end sets several times throughout the game, but also placed Eli into roles on the outside, previously manned by Hamilton, Darrius Heyward-Bey, Markus Wheaton and Sammie Coates. With Coates still nursing a finger injury, he didn’t see as much playing time as previously thought he would have following a 10 snaps/19% share in Indy; Sammie would only play 4 snaps the entire game against the Giants.

The Steelers continue to get incredible output from their rookie defenders. Artie Burns and Sean Davis never left the field on Sunday. Nor did Timmons, Ryan Shazier, Mike Mitchell or Ross Cockrell.

Playing almost exclusively out of a nickel package, William Gay was also on the field for 90% of the team’s 60 defensive plays. Stephon Tuitt stayed in for all but two of those plays, while the linebacker rotation didn’t rotate nearly as much, with James Harrison dominating the team’s snaps at OLB with 45 plays (75% share).

Bud Dupree logged his most time of the year (35/58%) while Anthony Chickillo added the next-most reps (20/33%). Jarvis Jones failed to enter the first half before playing 12 snaps (20%) in the second half. Arthur Moats was the clear casualty of Dupree’s return with 8 reps (13%) the same as defensive lineman L.T. Walton, who along with Daniel McCullers (6/10%) fell victim to the nickel package used against the Giants 11 personnel.

Javon Hargrave played 12 snaps before leaving with a possible concussion. His exit made way for a season-high of playing time by Ricardo Mathews (42/70%) who made the most of it by recording his first sack as a Steeler. (A crushing blow to Eli Manning nonetheless.)

With the recent playing time of Burns, Davis, Hargrave, and Chickillo, along with the return of Dupree, the Steelers defense appears to have found their identity. James Harrison, who was “saved” for the better part of the season, is now logging more and more time, as he also continues to get pressure on nearly half of his snaps (when used to rush the passer, and not drop into coverage).

Robert Golden, who failed to play a single defensive snap this game, after previously being a starting safety, and rotating in as an extra defensive back.

I believe we’ll see a similar output with Harrison, Chickillo and Dupree, negating the playing time of Jones and Moats going forward. Head Coach Mike Tomlin has said he will go with “the hot hand” in terms of which linebackers will receive playing time. I also believe the Steelers need to press forward with knowing what they have with Dupree and Chickillo, as Jones will be a free agent next season, Harrison could be playing his last year, and beyond those named, only Moats will still be around (as of now) for the 2017 season.

The defensive staff likely knows what type of player Moats is already, so it’s imperative they find out what the two younger linebackers are capable of doing.

On offense, Rogers playing on the outside signals a need in that position with DHB and Coates effectively out. Ladarius Green’s return also bumps into the number of opportunities from the slot for 17, so seeing him moved around (much like AB is) points to a vote of confidence from the coaching staff, as well as Big Ben.

Seeing either Heyward-Bey or Coates return to full strength would probably cut into Cobi Hamilton’s playing time, as the receiver is seldom targeted, yet finds a way to move the chains on third down conversions at least once per game. He’s been a steady hand, but doesn’t give the Steelers the big play threat they’ve lacked with Coates’ injury, or with Martavis Bryant‘s suspension.