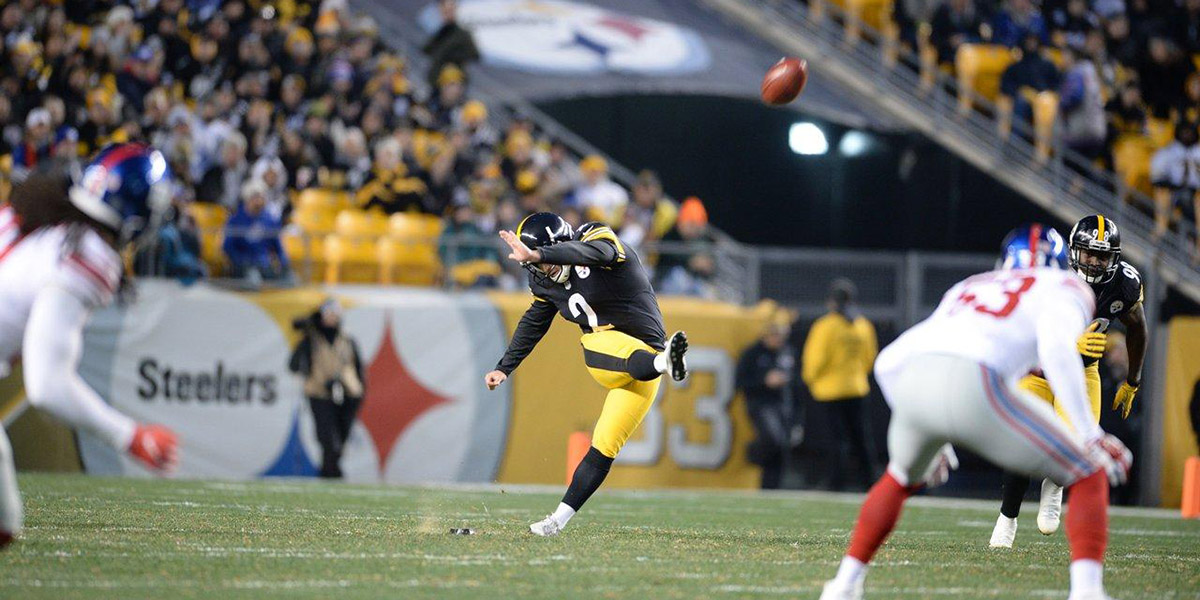 Unexpected Steeler comes through big in win over Giants

Did anyone else feel that uneasy little pit in their stomach start acting up around breakfast on Saturday?

I was sitting at a “Breakfast With Santa” event with my little one, and nearly felt the scrambled eggs I had just had, start to make me feel queasy: why do the Steelers have the worst luck in the world?

INJURY UPDATE: The #Steelers have added K Chris Boswell to this week’s injury report with an abdomen injury & is listed as questionable.

Knowing how the active roster stuff works, and also knowing the Steelers have no emergency kicker waiting in the wings, I started to panic. Pittsburgh had to sign someone by 4pm that same day, or risk having no kicker on Sunday!

Now, for Mike Tomlin and his love of going for two following touchdowns, that might work out alright. But what of kickoffs? What about attempting field goals in what could be a tight game against a hot New York Giants team?

It always seems like something is set to derail the Steelers, and all I had was visions of Josh Scobee dancing in my head. (That is, the kicker the Steelers signed to start last season, who missed a handful of costly field goals in the few games he played with Pittsburgh.)

Luckily, there was someone out there that didn’t seem all-too-bad, and was available to play on Sunday:

“Available” being the keyword. Who, on such short notice, was going to come in with no practice, and honestly be decent?

And what if they just said, “No sorry. I have plans tomorrow.”?

Well, that’s kind of how that worked out!

Randy Bullock had just played a round of golf on Friday when he got the call by the #Steelers. Said he had no idea it was coming

Randy Bullock went from being a former NFL kicker with the Houston Texans, who played a little relief kicker with both New York franchises over the last two seasons, before getting a call to play in December: his first game action since September!

On to Pittsburgh you go Randy, and you still might not play.

Look for Chris Boswell to kick today for Steelers vs. Giants. Sounds as if he overcame his abdominal issues from Saturday.

However, the Steelers opted to make Boswell inactive, regardless if he was 100% or not. Perhaps, in what is a mental aspect of the kicking game (coaches do call timeouts to “freeze” the kicker) Coach Tomlin and staff felt it was better to not have this weighing on the mind of Chris Boswell, during what could’ve been a clutch game-deciding field goal attempt?

That didn’t help the nerves of Randy Bullock, however, who I’m surprised even had a jersey ready with his name on it! (He was signed and in Pittsburgh that fast!)

Think about it: a big national game between two of the NFL’s all-time storied franchises, and an entire “nation” of Steelers fans hoping you don’t cost them the game.

Well, it appeared that way for Bullock, who was a perfect 3-for-3 on his field goal tries on Sunday. Yet, there may have been some nail-biting as Bullock didn’t get a chance to kick the ball until the end of the first quarter.

8 seconds left in the first quarter, to be exact.

That’s because the Steelers received the ball to start the game, which left the new kicker standing on the sidelines until that moment, to take his first crack at kicking into the notorious open-end of Heinz Field.

The kick was good, and the Steelers capped off an early 5-0 lead.

Bullock’s next kick into the open-end wasn’t as spectacular, coming up short, as Giant’s KR Dwayne Harris brought it out to the Giants 29.

The Steelers wouldn’t chance Bullock kicking following their first touchdown, instead attempting a failed two-point conversion. Bullock’s next chance would come on the ensuing kickoff, blasting the ball into the endzone for a touchback (redeeming himself on the first, short kick).

The newly signed kicker would get another shot at scoring with 28 seconds left in the half, nailing an easier 34-yard try in the closed end of Heinz. His next kickoff would put the Giants at their 18, and the Steelers entered the locker room at half up 14-0: 6 of those points off of Bullock’s leg.

Bullock would get more opportunities, making an extra point try, while dinking another field goal try in the open-end, off of the posts, to put the Steelers firmly ahead 24-7.

His last kickoff attempt was another short one, which gave the Giants excellent field position on their own 48. This lead to some garbage time points for the Giants, but Bullock’s overall showing on Sunday, in what was a high-pressure situation, cannot be undervalued. He scored 10 of the Steelers 24 points, at a time when they needed someone to step in for the injured Boswell.

There’s a chance that Boz may have been okay, but clearly something that the coaching staff was unwilling to chance.

Therefore Bullock’s transition from the putting green, to the lush, newly replaced green grass inside Heinz Field, was a welcome one.

Even if Bullock never plays another down as a Steeler, his contribution to the 2016 season will not be forgotten.