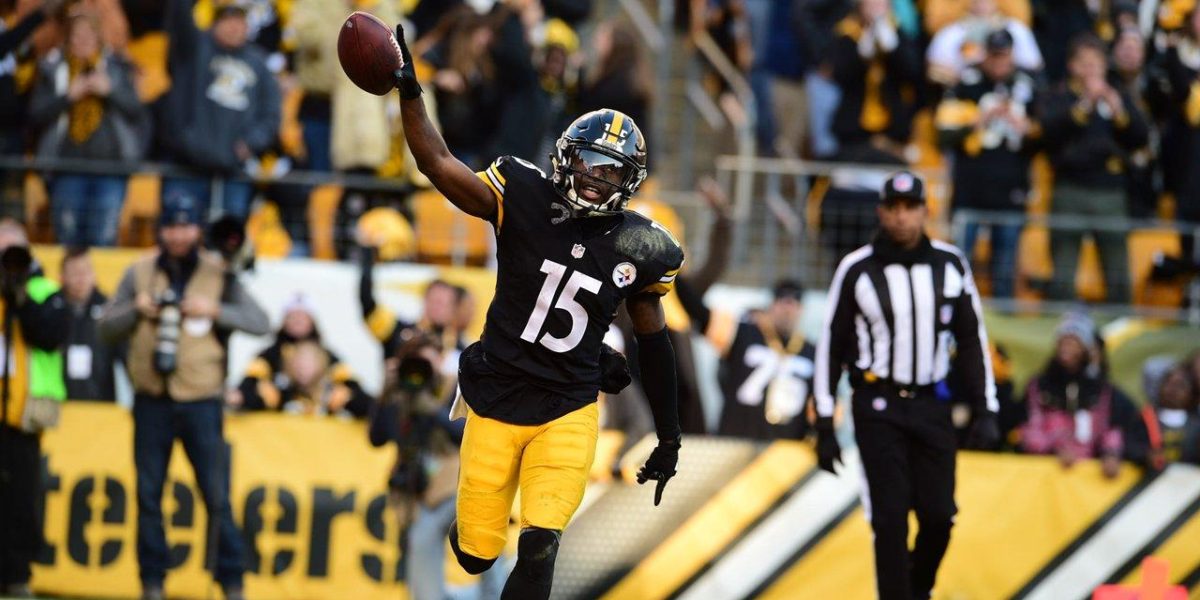 Would Demarcus Ayers have made a difference against New England?

When the 5′ 11″ 190 lbs. Demarcus Ayers was chosen by the Pittsburgh Steelers in the seventh round of the NFL Draft, there wasn’t any expectations. In fact, Ayers didn’t make the roster cuts at the end of the preseason, but was retained by the Steelers, who added the speedy receiver to the practice squad.

Ayers was long considered a special teams pick due his success as a kick returner in college. Of the 414 receiver ranked by NFL Draft Scout, Ayers was ranked 53rd; many didn’t think he would be drafted at all, let alone, make an NFL roster.

Weeks removed, and buzz began about how Demarcus’ practice sessions would eventually earn him a roster spot. The WR was called up to the main roster for the Steelers Week 15 contest against the Cincinnati Bengals, but would finally get a helmet one week later with the AFC North division on the line, against the Baltimore Ravens. (Sammie Coates and Ladarius Green were both out of that particular game.)

Ayers made the most of his opportunity: his first target in the league drew a pass interference call against Ravens CB Tavon Young.

The play would march the Steelers 35 yards down the field.

Ayers would catch his only official target, a 9-yard scamper, on the Steelers game-winning drive to end the game.

One week later, Ayers would score his first career touchdown, as the receiver played with a host of backups (including QB Landry Jones) in a game where Pittsburgh rested their starters before the playoffs. In that match-up with the Cleveland Browns, Ayers was targeted a ridiculous 12 times, catching 5 of those passes for 44 yards and the aforementioned score.

The shifty speedster wasn’t done, as he ran into the playoffs with 2 catches for 21 yards. Each of those catches moved the chains on 3rd and long for the Steelers, who scored touchdowns on both drives where Ayers converted.

Ayers would play once again in the Divisional Round, where he caught a single pass on 2-and-7, for 6 yards.

Considering his small chunks of success within a four week period, it was quite the surprise to find out that Demarcus was a healthy scratch for the AFC Championship game. This didn’t come as a shock only because of his offensive baby steps, but due to the Steelers being thin at kick returner, with Fitzgerald Toussaint in the concussion protocol.

Yet, despite coming out of college with a kick returning pedigree, Ayers has yet to take a special teams snap in the pros. (The regular season, that is.) He has, however, found himself to be a utility player within a crowded receiver group, finding the following amount of playing time:

Even though he was finding a small role on offense, the coaching staff came to a conclusion that another player was more valuable to activate… which leads to the title question of, what if Demarcus Ayers was active? Would he have made a difference against the Patriots?

I like to go back to the Baltimore Ravens game as a case-in-point, that yes, Ayers could possibly be a difference maker. I look at the New England Patriots, with their virtual clones of Julian Edelman, Chris Hogan, and Danny Amendola, and see the same type of similarities with Antonio Brown and his doppelgangers, Eli Rogers and Ayers.

In the AFC Championship, Rogers showed up to play, catching 7 of his 10 targets for 66 yards. Brown was often bracketed and double-teamed throughout the evening, which left big shoes to fill for Sammie Coates, Darrius Heyward-Bey and Cobi Hamilton; all of whom failed to live up to those expectations.

Much of this is speculation, but could Ayers have made the fingertip catch that Coates dropped? Or maybe the passes in the endzone which Cobi didn’t come down with?

Could Ayers have added a fast, shifty route-running wrinkle that the Patriots had little film on?

I often wonder the same, and with Demarcus sitting on the sideline without a helmet, there was no way we were going to find out.

I realize of course, Ayers has a limited sample size of which we’ve seen the receiver play, to determine if he’s doing the things requested of his coaches properly. However, it’s not as if Sammie Coates had ample playing time up until this game either, and we also saw miscommunication with DHB on Roethlisberger’s interception.

Big Ben mentioned the moment was too big for the young receivers, and he may have been right: for those receivers.

Would the same mistakes have occurred with Ayers in the lineup? Maybe… or maybe not.

I just wish we would’ve had the opportunity to see for sure.