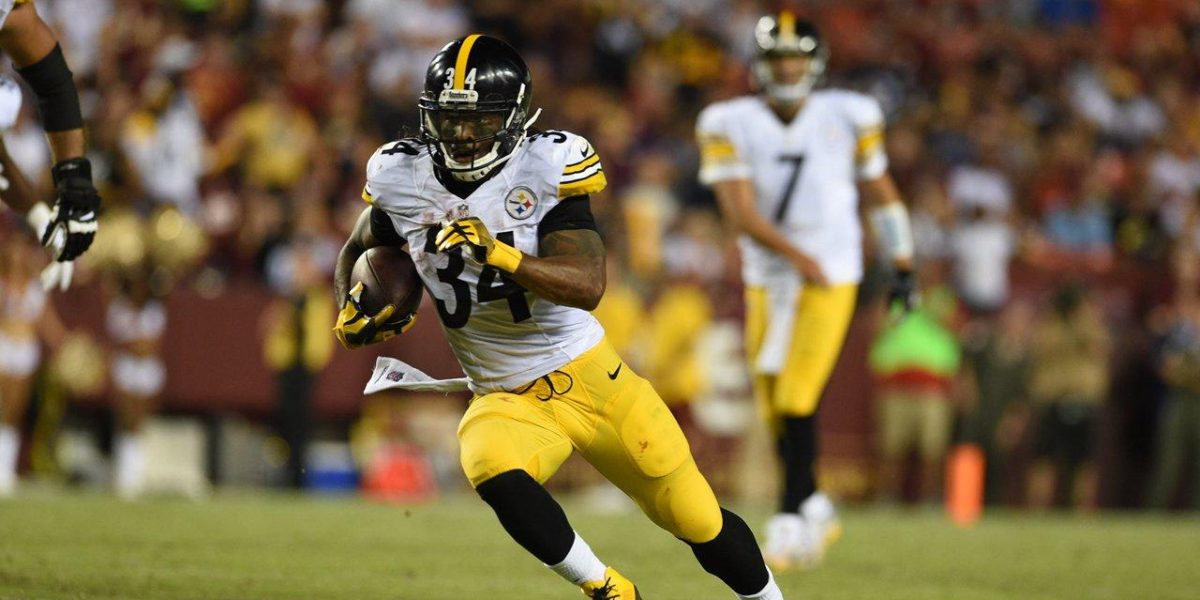 Turning 34 in April, does DeAngelo return for one more season?

Will DeAngelo Williams‘ last game be remembered as a 36-17 loss in the AFC Championship to the New England Patriots?

Or will the now 33-year-old running back (with an April birthday) attempt to return for another season?

It sounds as if the answer to that question is the latter, as expressed by Williams himself, via his Twitter account:

Thanks @Terrell_Davis I need a ring to punctuate my career!! https://t.co/l3iWTFgAFk

The tweet was in response to a comment made by former Broncos running back Terrell Davis, who is a host and analyst for NFL Network. Davis believes that Williams is showing no signs of slowing down.

However, it will take convincing the Pittsburgh Steelers front office of the same, to see if Williams returns for the 2017 season.

Williams is set to enter free agency after the expiration of a $4 million deal he signed with the Steelers in 2015. During his time in Pittsburgh he has rushed for 1,250 yards and 15 touchdowns, while adding 58 catches for 485 yards and and 2 touchdowns, all over the course of 14 starts in relief of All-Pro Le’Veon Bell.

The only knock on Williams thus far is his health and availability. Having started the first two games of 2015, and the first three games of 2016, Williams looked like a man possessed: to the point of being referred to as “1B” to Bell’s “1B” when talked of as a backup. Yet at times, he would go down for weeks at a time with minor, nagging injuries.

DeAngelo was that good, when he was good to go, as demonstrated  with a late season start against the Cleveland Browns, and stepping in for Bell early on in the AFC title game.

Usually running backs decline north of 30, but Williams has been well-preserved in timeshare roles, first with Jonathan Stewart and the Carolina Panthers, and his current split (if you could call it that) with Bell.

That means there could be more tread left for a one or two year deal to keep the fan favorite on the depth chart.

The rest is up to the front office, who acquired various running backs throughout the last season, in preparation for Williams departure, and whether or not they can get a long-term deal done with Bell. While I doubt Fitzgerald Toussaint will ever be viewed as a full-time starter, I wouldn’t say the same about another pickup: former Bills RB Karlos Williams, who spent part of the season on the practice squad before receiving a 10-game suspension for violating the league’s substance abuse policy.

The other Williams’ suspension was lifted following the season, with Pittsburgh instantly signing him to a futures contract. Expectations are high for the brother of Steelers linebacker Vince Williams; with the Bills in 2015, Karlos tallied 517 yards rushing and 7 touchdowns on the ground, while adding another 11 catches for 96 yards receiving, and 2 scores. If he were to return to form, he could compete for a backup role; a role he had behind LeSean McCoy in Buffalo.

The question is, would Pittsburgh sign DeAngelo to bridge a transition to Karlos becoming the backup?

That’s a lot of speculation for a team which looks to sign cost-effective veterans as insurance policies for their younger players. Entering last season, the Steelers retained Darrius Heyward-Bey at wide receiver, and signed defensive backs William Gay and Robert Golden to three-year deals, despite having Sammie Coates, waiting in the wings, and targeting Artie Burns and Sean Davis in the draft.

What’s most likely to push Williams into retirement (or going to another team) is if the Steelers feel there’s enough depth in both quality potential picks to draft, and no other pressing needs to fill on what will be the current roster heading closer to that date. The free agent market isn’t likely to yield any veterans with the same pedigree as DeAngelo. A few names which may be available when free agency beings include Redskins third down back Chris Thompson, 32-year-old Danny Woodhead, Karlos’ replacement, Buffalo Bill Mike Gillislee, journeymen backs Jacquizz Rodgers and Tim Hightower, or players long past their stay such as Darren McFadden and Andre Ellington.

Woodhead has had more injury issues that DeAngelo, and I wouldn’t expect Gillislee to be available. You can decide on the rest, but the potential available running back crop isn’t too attractive.

That crop could include the Patriots LeGarrette Blount, who we know would never be welcomed back to the Steel City.

I wouldn’t expect the Browns Isaiah Crowell, Packer Eddie Lacy, or Raiders Latavius Murray to hit the open market either. That leaves a slim list of options like Christine Michael, Terrance West, Robert Turbin, Bobby Rainey, Chris Johnson and Branden Oliver as the next best available.

That should give a good indication that if DeAngelo is able, and willing, and the Steelers are as well, that we could see 34 back on the field in black and gold for 2017.

Otherwise, Pittsburgh will have to gamble on Karlos staying out of trouble, and looking to the draft, to pick a back, or sign an undrafted player, in order to round out their roster.