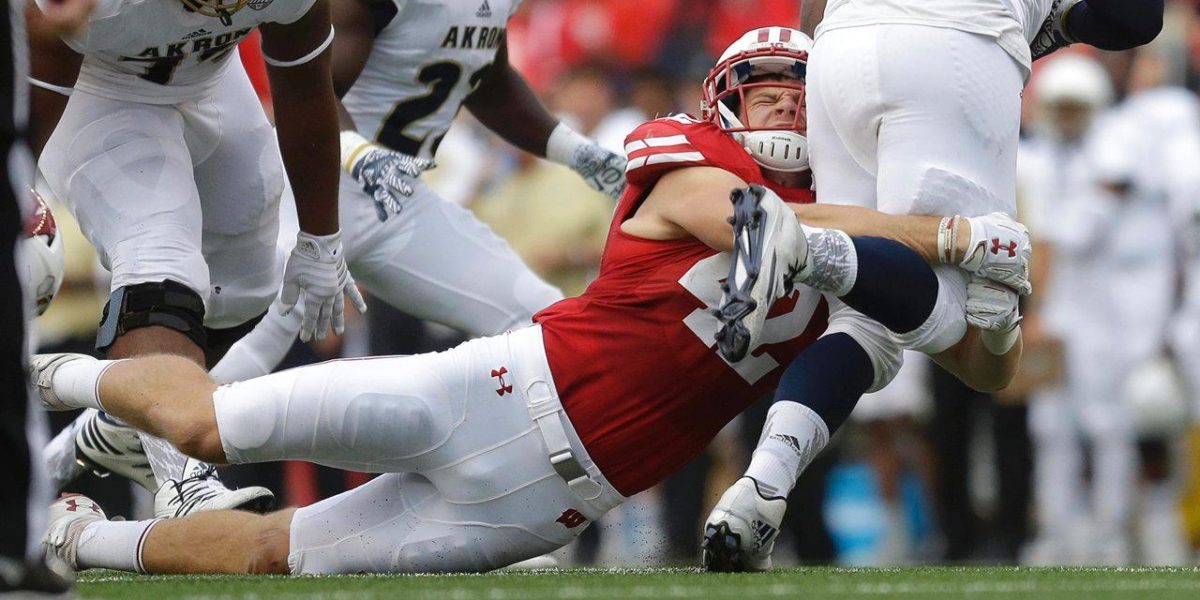 With the 30th overall pick in the 2017 NFL Draft, the Pittsburgh Steelers selected Wisconsin’s linebacker, T.J. Watt. You may be asking yourself, is T.J. related to J.J. from the Houston Texans, who is a 3x NFL Defensive Player of the Year athlete (2012, 2014, 2015)? Why yes, everyone should know this by now; he is the younger brother and is just as dominant.

J.J. spoke to the media right before the draft and told them that his younger brother is more polished than he ever was heading into the NFL. This talk could have been the reason T.J. propelled into the first-round after being projected as a second-round pick earlier in the draft process:

He’s much better than me at that age. He’s much more refined. He’s got better instincts than I had at that age

Pittsburgh took who at the time was one of the best players available, and it could pay off in the long run when veteran linebacker James Harrison retires in a year or two. Harrison is a 38-year-old athlete who is still the most disruptive force on the entire defense. That says something about the younger athletes, just not being able to step up and take over for the former 2008 Defensive Player of the Year.

Watts’s addition adds much-needed value to Pittsburgh’s defense, and his college statistics should make any Steeler fan excited for the upcoming season.

In his first full-season as a starter, T.J. Watt racked up 63 tackles (15.5 TFL), 11.5 sacks, one pick-six and two forced fumbles. These are excellent numbers for an athlete who made the switch from a tight end to an outside linebacker, destroying opponents, while continuing to work hard to reach the NFL level.

Let’s take a look at some film on T.J. and display what he does best and how he could impact the Steelers defense in 2017.

Creating turnovers on one of the biggest stages is what T.J. accomplished against Penn State in the 2016 Big Ten Championship. On 4th & 1, in the second quarter of play, Wisconsin’s defensive coordinator sent an exotic blitz where a cornerback came from the right side, all defensive lineman up the middle, and then Watt came from left edge and had to beat the running back, who was supposed to try and hold Watt for several seconds, so quarterback Trace McSorley had some time to make a play. Instead, the running back failed when Watt bent the edge, which resulted in a strip sack turnover.

What impressed me the most was his ability to use his speed and power to get past the running back, who is holding his neck for dear life, trying to slow him down. It was a bang, bang play and was much needed in the biggest game of his career to date.

After the play was over and in the following clip above, you will notice his electric energy after he forced the turnover. This celebration ignites a defense along with the fans at the stadium. If this is any indication of what he brings to the field on Sunday, I want more running backs trying to block this freak athlete.

Is this a linebacker or a cornerback? INCREDIBLE INTERCEPTION!

If the previous play made you excited, this one should make you jump out of your seat with pure joy. Once again, this play shows you that T.J. is a freak of nature type of player, who will impact a game any given Sunday, something that is critical in the NFL, as the saying, “Defense Wins Championships” have come true over the years.

Against Purdue last season, Watt made what the commentators called, a SportsCenter worthy Top 10 play, with his insane pick-six he returned 17-yards for a touchdown. What made this play so special was his high football IQ. Watt came hard to stop the run on this play, but right when he realized that the running back was coming out in a flat and slipped out, he let him go knowing that his teammate had an opportunity to make a play if he didn’t.

True athletism was displayed as he jumped in the air and intercepted the football. Not many linebackers can jump and catch the football at the same time, and then return it to the end zone. It is what makes the Watt brothers so special.

T.J. put on an absolute show against Michigan State in September of last year. He racked up two and a half sacks, three solo tackles and three assisted tackles, just flying all over the place making plays for his team. Watt actually didn’t register one sack in the first half of play. The half sack occurred in the third quarter and the two full sacks came with less than ten minutes remaining in the fourth.

If you are an athlete that can make plays in the fourth quarter, you will help close out many games, giving your team either a victory or a chance to make a comeback. One of the sacks that stood out to me was when he used his high motor and power to sack Michigan State’s quarterback Tyler O’Connor while working on the left tackle, who fell down after trying to hold Watt back.

T.J. did a great job of overpowering the tackle and making his way to the quarterback, who didn’t see him coming until the last second.

Never Give Up Mentality:

In the last film session, I talked about how Bud Dupree will have a breakout 2017 campaign and showcased exactly how he improved his pass-rushing ability. In that article, I described how Dupree has a never give up type of mentality and his speed along with his power makes him a force on defense. Well, Watt never gives up either and this above play displays that.

Late in the fourth quarter against Michigan State, Watt lined up behind fellow teammate Vince Biegel for a split second before quickly shifting to the right to attack both the left guard and tackle before rushing up the middle to sack O’Connor, who stepped up into the pocket. Great play by both athletes and an excellent defensive play call.

As you can see, T.J. Watt’s arrival in the Steel City looks quite promising. He is an athlete that has already been subjected to the NFL’s working conditions as he practiced with his brother J.J. multiple times and understands so much about the game with his high football IQ. Even Pittsburgh’s defensive coordinator Keith Butler mentioned that working with this older brother and coming from a competitive family has made him more prepared than other rookies on the Steelers roster.

This is according to a segment on Steelers.com called ‘FaceTime’ hosted by Missi Matthews. (Here is the audio of the segment if you are interested to hear what Butler had to say about the defense as a whole and Watt.)

It’s a great time to be a Pittsburgh Steeler fan. The defense is no longer old and slow as Warren Sapp once said, but rather electric and exciting with Shazier, Watt, Dupree and other young defenders trying to make a trip to the Super Bowl and capture the Seventh Lombardi Trophy.