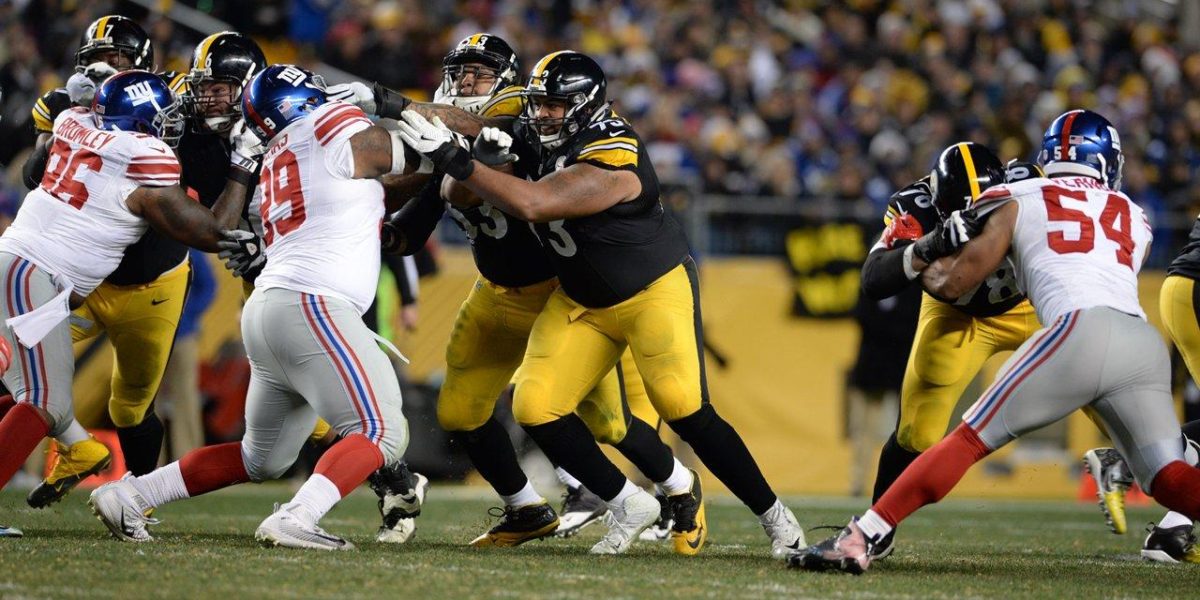 I generally enjoy all of these offseason lists and debates about who is the best of the best in the National Football League. I also enjoy debating why players on a team I support may be better than players on opposing teams; sometimes bias gets in the way of those opinions, other times, I feel there’s bias which gets in the way of the differing view.

Take the NFL Top 100 list for example. I felt that two Steelers, Le’Veon Bell, and Antonio Brown, belonged in the top ten, but were slighted by not being named the best at their respective positions. I felt they both could’ve been rated higher than their peers, yet, I can accept a case where someone might feel Julio Jones is a “better” wide receiver than AB (though I truly believe they are two different styles of players).

That’s fine and dandy until you see what Pro Football Focus (PFF) released with their offensive line rankings for 2017. In the article, PFF ranks the Pittsburgh Steelers third overall, with the Cleveland Browns coming in one spot better as the second-best unit in the entire league.

Yes, I mentioned that differing views can sometimes be accepted, but not for the reasons PFF is giving. Here is what they had to say about the Steelers offensive line unit:

If you’re projecting purely off the final nine games from a season ago, the Steelers would be the No. 1 line in the league. Alejandro Villanueva came on extremely strong over that period, but his poor play from 2015 drags them down a bit. Over that final nine-game stretch, he allowed just 12 pressures. If that level of play continues, Ben Roethlisberger will be a happy man.

That sounds fair until you read why PFF ranked the Browns at number two:

The offseason free agent spending spree could pay off huge dividends in Cleveland. J.C. Tretter and Kevin Zeitler both bring well above-average grades from a season ago at center and guard, respectively. The only question mark comes at right tackle where Shon Coleman looked at least competent in his 62 snaps as a rookie.

Now hold the phone for just one minute. This is where common sense rules the roost and bias is set aside. I’m not quite sure how PFF arrived at their conclusion that Alejandro Villanueva’s 2015 season drops them from first to third, behind Cleveland of all teams. Yes, Joe Thomas is a multiple Pro Bowl selection at left tackle, but their likely starting candidate at right tackle, Shon Coleman, didn’t even have a 2015 season. Arguably, he barely had a 2016 season, as Coleman only appeared in five games!

If you’re going to ding the Steelers for Villanueva’s first seven games, but not acknowledge he was rock solid in nine games (versus Coleman’s five) that’s an awkward way of doing math. Furthermore, Coleman only played a total of 62 snaps, which is acknowledged above. Villanueva was the only Steeler to play every offensive snap last season.

It doesn’t seem like a fair comparison, and somewhere, someone made the connection that Big Al plays left tackle and Coleman plays right. Yes, this is true. Joe Thomas is the Browns left tackle, and he’s a great one at that. Thomas never leaves the field and never misses games. Coleman plays on the right side, which is where Marcus Gilbert mans the trenches for Pittsburgh. According to Pro Football Focus, Gilbert is one of the most effective pass blockers in all of football:

The most efficient pass blockers among offensive tackles in 2016. pic.twitter.com/OQcnCDn8kr

If you had to take two, would you prefer Villanueva, who gave up only 12 pressures in his last nine games, and Gilbert, who only gave up 20 all season, over a second-year player with 62 snaps of pro experience and the Pro Bowler Thomas?

Hold that thought, because this gets better. Obviously, Thomas has been the most consistent anything in Cleveland for the last decade, which means the rest of the Browns O-line has some explaining to do. Back when Alex Mack was the center, there was some stability on their offensive line. Mack was a multiple year Pro Bowl selection who left before the 2016 season to join the Atlanta Falcons. His replacement was supposed to be 2015 first round draft pick Cameron Erving, but the former Florida State product (who was selected 19th overall) failed to replace Mack at the position and was replaced by a practice squad player at the center position by the end of the season. It’s speculated Erving will move to tackle to compete with, but not beat out, Shon Coleman (the man with 62 snaps).

Scrambling for a solution, the Browns went on a spending spree for offensive linemen in free agency, bringing in former Bengals guard Kevin Zeitler and Packers center J.C. Tretter. Zeitler favorably compares as another underappreciated guard who silently does a stellar job in both run and pass situations. However, he must be compared with either of the Steelers options, back-to-back Pro Bowl selection David DeCastro or fan favorite Ramon Foster… who was the second-highest ranked guard according to PFF in 2016:

Playing both left and right guard in 2016, nobody did it better than Marshal Yanda. pic.twitter.com/lLkWQdnyTj

The other Browns guard, Joel Bitonio, was placed on IR in October, undergoing Lisfranc surgery. He’s valuable to Cleveland, as the team signed him to a five-year, $51.2 million extension this offseason, but Bitonio has missed 17 games over the course of the last two seasons. Ditto for the newly acquired Tretter, who is the next man to attempt to fill Alex Mack’s shoes. Tretter took over the starting center position in Green Bay following an injury to starter Corey Linsley. While Tretter was considered the top center available in free agency (and is an obvious upgrade to Erving or anyone else on the depth chart) he too has been oft bitten by the injury bug, missing 33 games in four years with the Packers. You could make the case that Maurkice Pouncey has had his injury battles over the years as well, but we are in fact comparing a Pro Bowl center (Pouncey) to a backup with ten career starts.

Therefore, there’s no contest. An offensive line which has little chemistry should never be ranked ahead of one that was intact for most of 2016, as well as a good portion of 2015 (sans Pouncey). They have proven their value.

The Cleveland line has never been on the field as a unit. Ever.

Coleman was inactive until Bitonio was placed on Injured Reserve, while Tretter and Zeitler are entirely new to the team. That’s an incredibly tough sell when compared with a Pittsburgh frontline which nearly set it’s franchise’s mark for the least sacks in a season; and ironically would have done so if not for the Browns, for whom they sat several key starters to rest in the final game of the regular season.

To give Cleveland a bit of credit, they recognized how poorly their line played in 2016 and made several moves to upgrade it. But to say they improved from one of the lowest ranked units to the second-best is overzealous.

And I say that with, and without, bias involved.