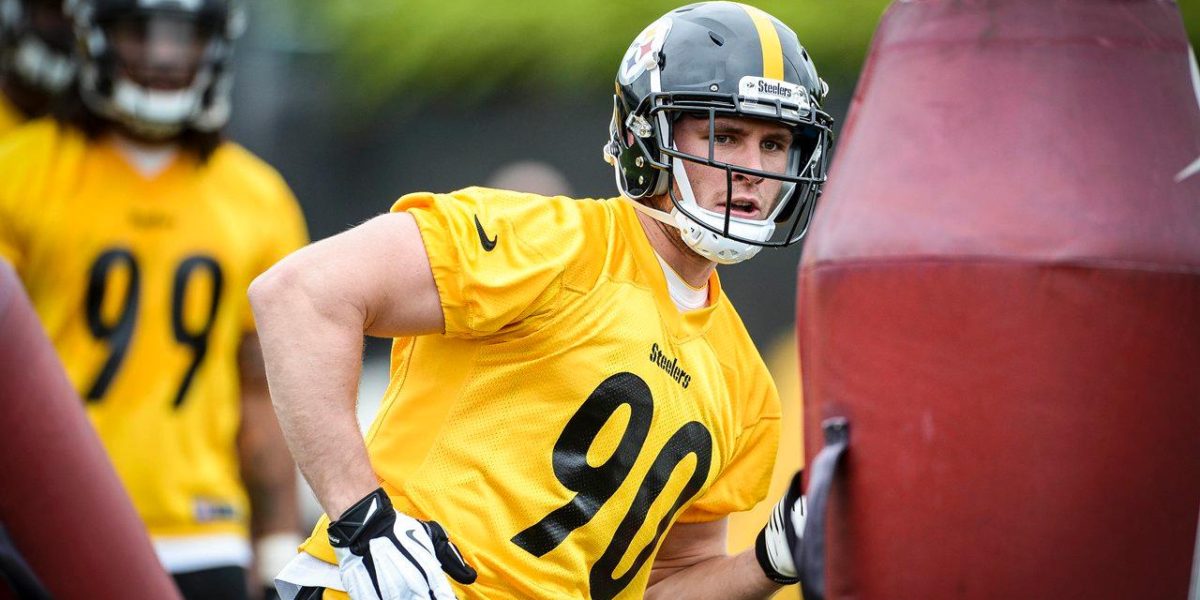 Which Steelers rookie will have the biggest impact in 2017?

It’s a rare occurrence, but three rookies had a major presence on the Pittsburgh Steelers roster last season. Those three players, Artie Burns, Sean Davis, and Javon Hargrave, were all selected in the first three rounds of the 2016 NFL Draft. As such, those rookies raised the bar for an organization which traditionally eased their new recruits into the system over a period of time.

With heightened expectations, many have drawn a conclusion that the 2017 Steelers draft class will have an immediate impact. However, we may have to temper expectations, at least to start. In that regard, let’s have a look at which rookie could have the biggest impact for Pittsburgh this season.

T.J Watt is the head of this class by default. As the Steelers first round draft pick, at a position that was criticized during the 2016 season, while also fielding a 39-year-old wonder in James Harrison, Watt will be looked up to contribute to the team’s pass rush early and often.

How often is the key: Bud Dupree was gradually brought into the defense during his rookie season as well as coming off of an injury in 2016. Former first round pick Jarvis Jones (who is no longer with the team) was rushed onto the field as a “co-starter” from Week 1 and struggled to ever find footing in his four years with the Steelers.

I believe fans will be anxious to see Watt play but will have to temper expectations for a rotation featuring 50% or less of James Harrison from the beginning, and perhaps 25% or so of Arthur Moats and Watt. As the season progresses, Watt could see his share increase to half or more. But if last season is any indication, playing time could also dip to where Harrison is on the field 50-75% of the time, and Moats is completely squeezed out of the rotation; leaving Watt with the same amount of snaps per game, but allowing for a near-100% of playing time for the ageless James Harrison.

Smith-Schuster is a dynamic wide receiver and exciting addition to the Pittsburgh Steelers offense. Landing the USC product in the second round was considered a steal by many draft analysts, however, Steelers Nation might want to temper expectations for a season full of JuJu highlights.

Smith-Schuster is part of the most crowded depth chart on the Steelers roster, one which brings back Martavis Bryant and also added another big, fast target named Justin Hunter. If that weren’t enough, there’s also Darrius Heyward-Bey, Cobi Hamilton, Sammie Coates, and Eli Rogers (who all split time as starters in 2016) plus last year’s seventh-round pick Demarcus Ayers. Antonio Brown is without a doubt eating up on starting roster spot, with Bryant assumed to take over his starting role as well. The slot may still be occupied by Eli Rogers, and with how the Steelers hold back their receivers from playing early in the season, and a lack of four and five receiver sets a la the Bruce Arians days, I would surmise that Smith-Schuster sees very little playing time.

Include target-hungry running back Le’Veon Bell, who doubles as a major receiving threat to that equation, and there just isn’t enough targets to feed everyone who could potentially catch a pass in Pittsburgh’s offense this season. Smith-Schuster will have to play well above the line, in my opinion, to make a large impact as a rookie. That doesn’t mean he won’t get some splash plays or that he will be a bust: it simply means he could be observing from the sidelines to produce in seasons beyond 2017.

Fans have been frustrated with the Steelers secondary for several years now, which raises their expectation of any inclusion to this unit each season. Ever since Troy Polamalu and Ike Taylor retired, the defensive backfield has been in disarray (though you can argue it was like that when those two played out their final seasons in the NFL as well).

The good news is that the secondary appears to be on the upswing. I know some of you aren’t thinking that way based on the AFC Championship game, but that was a different animal with its own set of circumstances which merits its own article in the near future. As for the rest of the season, specifically, the portion where Artie Burns became a starting corner and Sean Davis moved into the strong safety role, the secondary was among the best in the league.

Both of those players were rookies who will enter their second year seasoned and hopefully better than before. Mike Mitchell will resume his free safety position, and Ross Cockrell should remain the other starting cornerback. However, some rumors surfaced that third-round pick Cameron Sutton could compete with Cockrell for his starting spot. I’d think it could take one heck of a camp to do so, considering Burns didn’t beat out William Gay during last year’s camp battle.

Speaking of Gay, he could be in a fight with Sutton for the nickel corner spot as well. However, 2015 second-round pick Senquez Golson and free agent acquisition Coty Sensabaugh are both fighting for playing time too. While Golson has never played a snap in two years and could still be considered a rookie, he still factors into the mix at this time. Sensabaugh was also signed to compete.

This means that while we may see Sutton at some point during the regular season, he’s far from a lock to see a lion’s share of snaps. Should Cockrell, Gay, Golson, and/or Sensabaugh prove to be a better option at the other cornerback spots, Cam Sutton will also be in a “wait and see” point observing from the sidelines.

This may not be a popular grade for the University of Pittsburgh fan favorite, but all one has to do is see how DeAngelo Williams was utilized when Le’Veon Bell was healthy to understand why Conner’s realistic expectation should be below average. The excitement around the Pitt running back is well deserved, but he may not see very many reps.

Then again, the Steelers might want to spell Le’Veon Bell more often, though that same concept was mentioned in past training camps and then disregarded during the regular season. The two-headed monster in the Steelers backfield never manifested; a single back is usually flanked by extra receivers, tight ends, a “reporting eligible” tackle, or a fullback. In 2016, that meant Eli Rogers, Xavier Grimble, David Johnson, Chris Hubbard and Roosevelt Nix were mixed in spurts over another running back like DeAngelo.

If the Steelers do the same this season or attempt to use more of that deep receiver unit in four or five wide formations, it will mean fewer opportunities for James Conner; not more.

Everyone with a voice wants the next Ben Roethlisberger to be groomed.

Everyone with a voice doesn’t want that player to be Landry Jones.

Everyone with ears needs to listen clearly: Dobbs will be playing with the same third, fourth, fifth, and sixth stringers in preseason games as Jones did for several years. Read: players who won’t make the roster and have little chemistry with each other will not be very sharp. We saw it happen with Landry, and we witnessed it with Dustin Vaughan and Bryn Renner attempting to play third string in last year’s exhibition games. The result wasn’t pretty, and it may be similar for Dobbs, though I think he’s in a better position to succeed.

I’d like to think that Dobbs will set the world on fire, but I have too many images of picture perfect passes falling through fingertips over the years, even when Markus Wheaton and Martavis Bryant were cutting their teeth with solid veteran backup quarterbacks such as Bruce Gradkowski. Therefore it’s an insanely high expectation to think that, barring other setbacks, Dobbs is anything more than a third-string QB this season.

Brian Allen sort of falls into the same category as Cameron Sutton, until you realize he was a converted wide receiver and is a very raw talent prospect. In fact, Allen reminds me more of Doran Grant and will have to work hard for a spot on the 53-man roster. Even though the Steelers could still use depth in the secondary, Allen is a developmental prospect at this time who will need to show flashes to win a roster spot, and playing time, over any of the defensive backs named in Sutton’s analysis above.

I’m really not sure if Holba’s fan expectation is “high” but I’m going to judge that based on the reaction of the Steelers spending a sixth-round draft pick on a long snapper.

The truth is that Holba will largely go unnoticed, so long as he does his job as well as his predecessor Greg Warren. Since long snappers are seldom drafted, Holba will need to go unnoticed or face a fan frenzy of “they should’ve picked this guy instead”.

The safe bet is Holba is quite alright and everyone forgets he’s even on the team: that’s a medium expectation which could also be classified as “none” if he weren’t already penciled in as the starter!

Last but not least is the Steelers seventh-round draft pick, edge rusher Keion Adams. Fans tend to believe that all draft picks must grow to become Pro Bowl level talents when truthfully a large number of them fail to make a roster in their first season.

I believe Adams is in the right place at the right time: the Steelers are in need of pass rushers, and two of their current outside linebackers, the aforementioned Arthur Moats and Anthony Chickillo, could become free agents after this season. That may mean Adams has to hold out for a spot on the active roster and continue his journey on the practice squad for 2017. With T.J. Watt being groomed as a starter, James Harrison playing out what may be his final NFL season, and Bud Dupree locking down the side opposite that duo, Adams appears to be at the bottom of the totem pole, and may not see much, if any time with the defense.

His best option is will be securing time with the special teams unit and working his way up. Therefore, his realistic 2017 impact will be “low”.

7 responses to “Which Steelers rookie will have the biggest impact in 2017?”