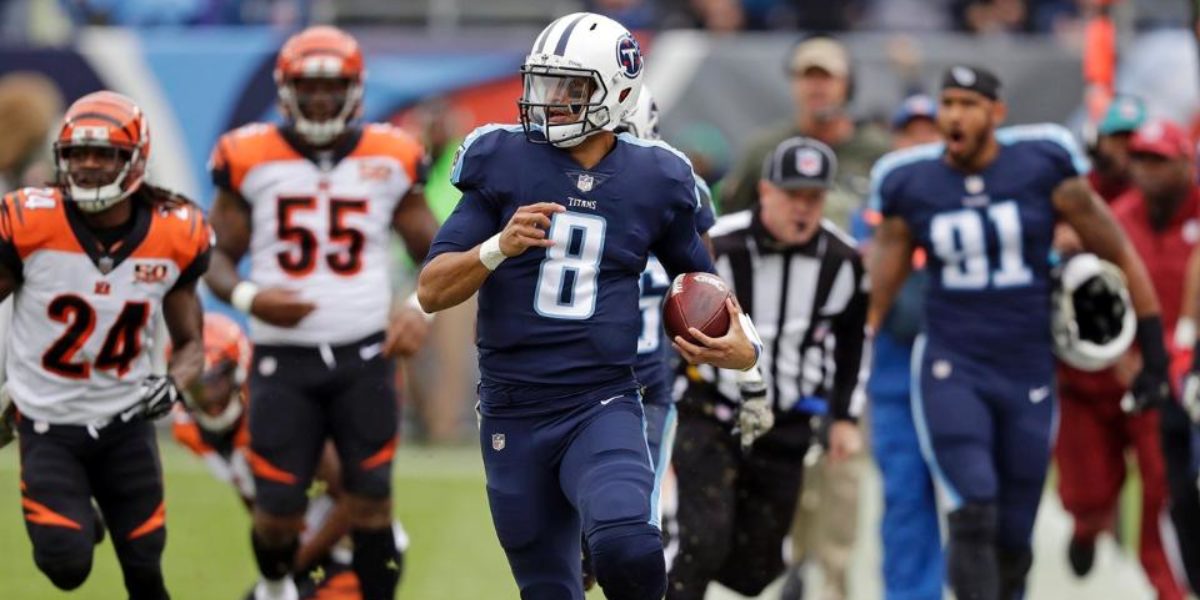 Matchup of the Week: Stopping the run against Titans critical for Steelers

It’s obvious if you’ve watched any of the AFC North games against the Tennessee Titans, that they aren’t a team to be underestimated. After a 24-20 win against the Bengals on Sunday, Tennessee is riding a five-game win streak and are tied at 6-3 with the Jacksonville Jaguars (AFC South). The Titans are averaging 22.3 points a game, ranked 13th in the league; they’re 18th in total offense (328.7), 27th in passing (203.9) and seventh in rushing (124.8). The matchup of the week will be how the Pittsburgh Steelers are able to shut down Marcus Mariota and the dual-headed rushing attack the Titans have been successful in utilizing against their opponents. Christina Rivers and Nathaniel Bodnar team up once again this week to outline the key areas the Steelers will need to focus on to stop the run.

What the Titans present in the ground game

Stopping the run against any team the Pittsburgh Steelers face will determine a victory or loss. Against the Chicago Bears in Week 3, they allowed Jordan Howard to surpass 100-yards; earning 140 yards and averaging 6.1 yards-per-carry, along with two touchdowns. In a loss versus the Jacksonville Jaguars, first round draft pick Leonard Fournette was held to 91 total yards and a touchdown before breaking loose in the final minutes of the game when he ran for 90 yards, putting an exclamation mark on a dominant victory. Fourtnette was averaging 6.5 yards-per-carry. Those performances are ones that cannot be repeated on Thursday Night Football against a tough run-first Titans team, especially after a short week of preparation for Pittsburgh.

Tennessee has DeMarco Murray as their leading rusher with 109 carries for 433-yards and four touchdowns. His backfield partner is former Heisman Trophy-winning running back Derrick Henry, from the University of Alabama, who has found a larger role this season on offense. He has 94 carries for 409-yards and three touchdowns. Pittsburgh needs to be able to prevent splash plays from Murray and Henry if they want a chance to win this football game. It has been proven over the last few games that if this Steelers team stops the run and forces the opposing quarterback to throw the football, they will come out with a victory.

Murray and Henry are one of the very best running back duos in the NFL this season. Murray isn’t just a rusher. He is very capable in the passing game out of the backfield. Henry is primarily used as the ground-and-pound back. Murray leads the team with 48.1 yards per game but has produced just one 100-yard rushing game while Henry is close on his heels with 45.4 yards per game and has two games of 90-plus yards. Stacked together, this is a two-headed threat that the Steelers can’t afford to allow out of the cage.

It isn’t just the running backs that present a danger on the ground, however. Marcus Mariota is one of the most versatile dual-threat quarterbacks in the league and gets dangerous when his run game heats up with his arm. He hasn’t played as good as he did in 2016, but he’s shown over the last four weeks that he still has what it takes. Against the Bengals, Mariota struggled a bit and the Steelers would do well to pull the tape before they face him and the Titans offense.

Key Steelers personnel to get the job done

When it comes to preventing big splash plays from the running back position, everyone tends to believe it’s a collective effort from all 11 athletes on the defensive side of the football. While that is the case for multiple NFL teams, I would have to say two athletes on the Steelers come to mind with their efforts at stopping the run – defensive end Cameron Heyward and safety Sean Davis.

Last season, when Heyward tore his pectoral muscle the team immediately felt a loss on the defensive line. Heyward, who just recently was nominated for the Art Rooney Sportsmanship Award, is a guy that can really disrupt on the line of scrimmage.

Key grades and stats from the Steelers win over the Coltshttps://t.co/fPmLkiNnxR pic.twitter.com/oYmiXtGlLE

Here is what Pro Football Focus wrote about Heyward last week vs. the Colts:

Heyward was an absolute menace on the interior of the defensive line for the Steelers Sunday. Heyward consistently was beating the Colts guards and center in with his pass rush. Heyward finished with four hurries on 24 pass-rushing snaps with an 87.0 pass-rushing grade. He was also great in run defense, forcing himself into the backfield and forcing the running backs to cut out of their intended holes. Heyward had one stop and finished with a 91.3 run-defense grade.

Davis flashed the ability to come from his safety position and stop the run last year in his rookie season. One game I remember him doing so well in was at Heinz Field against the red-hot (at the time) New York Giants. He read the run play and made a fantastic tackle on running back Paul Perkins. Davis also showed good discipline in the redzone against the Detroit Lions, helping the Steelers defense get critical stops. His speed and high football IQ will be tested this Thursday night. There is no doubt in my mind that he will be a major factor in the goal of preventing Murray and Henry from exploding.

The Steelers held up relatively well while Stephon Tuitt was injured, but having him back in the lineup was a great asset against Jacoby Brissett and the Indianapolis Colts. Tuitt has the skills and athleticism to be tasked – especially with Javon Hargrave – with keeping Mariota pressured in the pocket and contained.

Tuitt was also great on the interior of the Steelers defensive line against the Colts. Tuitt finished the game with a sack and a hit, offering a 77.3 pass-rushing grade. He also added in three stops in run defense with an 82.8 run-defense grade.

The Steelers defensive line has improved from earlier in the season and the combination of Tuitt, Hargrave and Heyward has been brutal on some opponents. Tyson Alualu has also stood out in the games he’s been a part of. The Steelers need to play like they did in this clip, but on the entire length of the field:

While I agree with Nathaniel’s assessment, I think the Steelers need to get their linebackers involved heavily in the run game as well. If they can shut Murray and Henry down early, Mariota will be forced to look for receiving targets that have been a bit of a liability for Tennessee this season. Their most consistent receiver, tight end Delanie Walker, is dealing with both wrist and ankle injuries while leading the team with 43 receptions (22 catches over the last four games).

If Mariota feels threatened in the pocket, he will try to escape. If the linebackers – especially T.J. Watt and Bud Dupree on the outside – can maintain their lines and not overpursue, they should be able to give the middle linebackers and safeties time to converge and stop the play. Key to all of this is forcing the Titans to go to the pass (rendering them one-dimensional on offense) by eliminating their ability to grab big yardage on the ground, but it will take a full team effort on the defensive side of the ball to be successful.