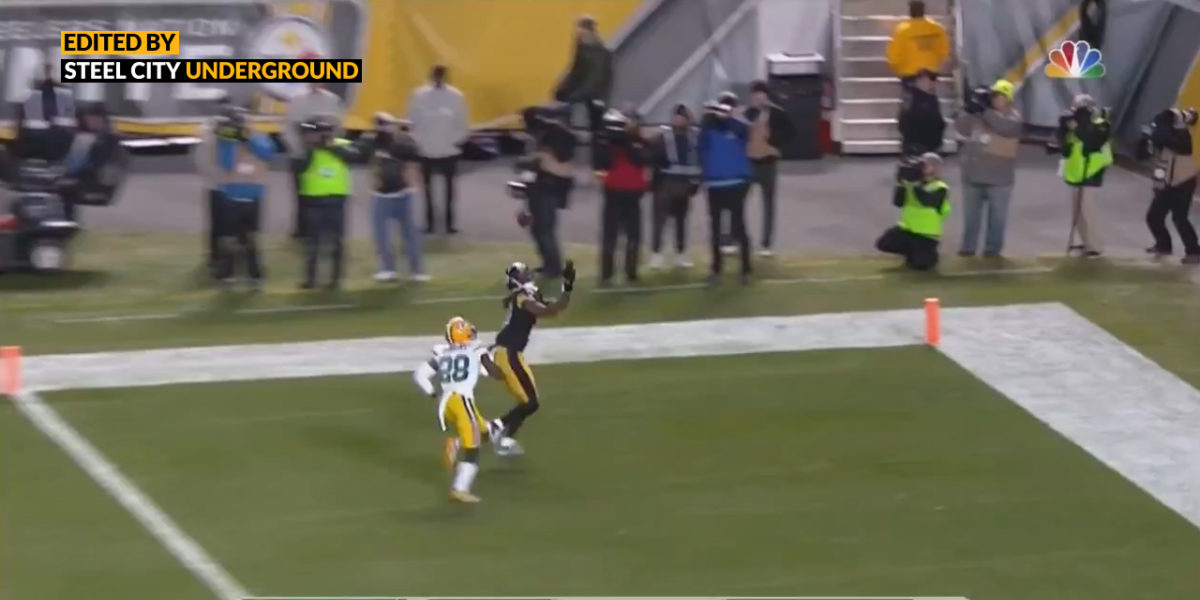 Steelers Nation was waiting for this moment: Martavis Bryant‘s breakout in the 2017 season.

Ladies and gents, I’m here to officially announce that Bryant is back. That may seem like a bit of an exaggeration to some, as Sunday wasn’t Bryant’s biggest game of the season. He’s caught more passes, had more receiving yards and even scored a touchdown already in 2017. The difference this weekend was Bryant clearly showing he’s all-in as a team player, something which was criticized early on in the year, and more after drawing attention to himself for some ill-advised social media posts.

However, on Sunday, you could clearly see a player committed to making his case for being a part of the Steelers plans, at a time when the spotlight was back on him. With JuJu Smith-Schuster ruled out of Sunday’s game with an injury, many were expecting Bryant to make an impact.

Right from the start, Bryant took the opening kickoff 38 yards, setting the Steelers up on their own 41-yard line on the game’s first possession. Bryant was filling in for Smith-Schuster as a kick returner and made an impression on that initial play of the game. Later we would see him blocking and doing whatever it took to lead his team to victory.

One of those plays was on that very same opening drive, where another of the Steelers receivers (Antonio Brown) missed a key block which would’ve sprung Bryant into the end zone.

Had AB made his block, this oft-criticized running play would’ve worked to perfection. The reason it’s illustrated here is that Bryant made every effort to cross the goal line. This play which gets panned for “not working” was not Bryant’s fault, and it’s not finger pointing at Brown either because I’d rather not have a holding penalty there if he can’t contain. Rather, this play shows the Steelers still have faith that Bryant can make things happen with his speed: this won’t be the last time we see this play.

On the next play in the second quarter, Bryant does, in fact, find the end zone on a 17-yard pass from Ben Roethlisberger.

This play is a thing of beauty, as it involves precision timing on both the pass and the route running. Bryant beats his man as the ball lands softly into his “basket” for six.

You’ve now seen twice in this game where the Steelers and Ben Roethlisberger felt more than comfortable enough to trust Bryant in big moments. However, that wasn’t the last chance he’d get on Sunday.

Down seven with less than a minute remaining in the third quarter, Big Ben tries to work the opposite side of the field with the 6’5″ Bryant working a mismatch with 6’1″ Packers CB Davon House.

While the play didn’t end in six, the drive would, as Bryant has a clear advantage. The only defense House had left was to try and get away with pass interference. The flag is thrown and the Steelers move to the 1-yard line.

Pittsburgh receives a new set of downs, but doesn’t need all of them, as the offense scores on the very next play.

You won’t find any more proof that Martavis Bryant can make an impact in a game. He appears to (finally) feel comfortable in a football uniform again, and when the lights shined the brightest, he was ready to answer the call.

The Steelers offense is starting to look like the one fans felt it could be back in August and September. With a healthy set of Killer B’s and a returning JuJu “B”, the sky could be the limit for this unit.