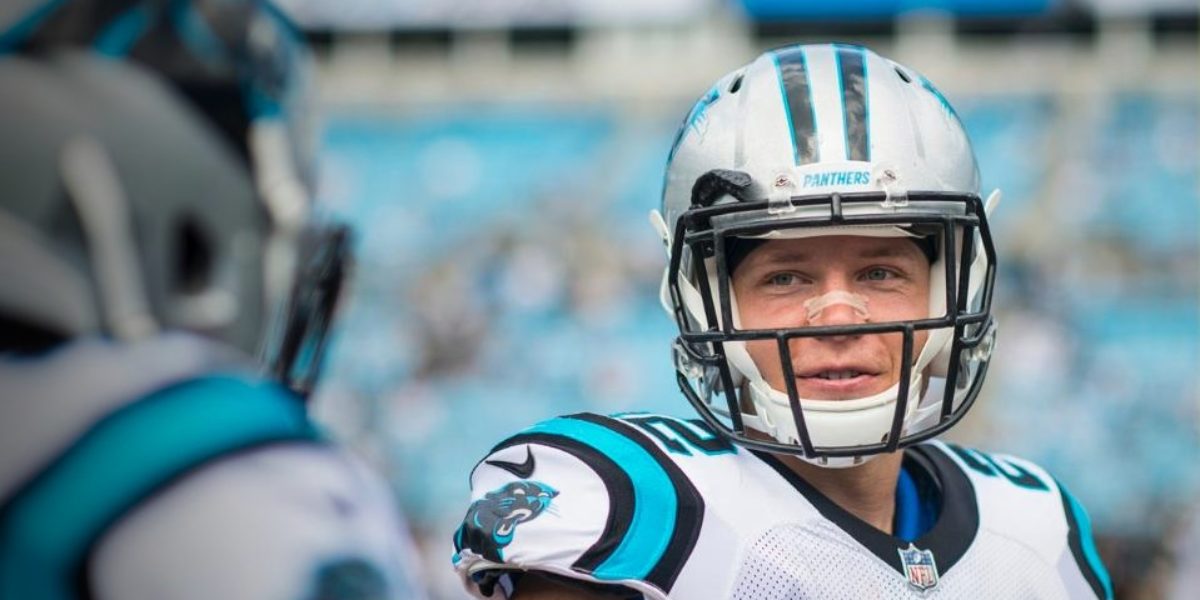 Continuing on from part one (of our analysis of picks 1-5) of the 2017 NFL Draft class, there were nearly as many mixed results from the rookies selected sixth through tenth overall. Two players from the second half of the Top 10 were a part of teams that entered the post-season, with one an AFC West champ and another in the hunt on a Wild Card team. Here is a wrap-up and look at how the draftees performed in 2017 in order of overall draft selection and their potential moving into 2018.

The son of former NFL running back George Adams was the nation’s top safety recruit entering his collegiate football career at LSU. Earning snaps as a true freshman, Adams got his start as a sophomore, recording 67 stops, four interceptions, and six pass break-ups; earning second-team All-SEC honors. In his junior campaign, Adams was voted second-team all-conference by coaches after logging 76 tackles, 7.5 for a loss, one interception and four pass break-ups. The Associated Press placed him on their first-team All-American squad, however, due to the impact he had while on defense for the Tigers.

“Jamal Adams is the safest pick in the draft. You pair him with Marcus Gilchrist and all of a sudden you have one of the best safety tandems in football. I would assume Mike Maccagnan thinks he can augment the corner position because it is so deep later on.” — Mike Mayock

Draft scouts saw a mature young man who loved to punish running back and set the tone on defense. His ability to get the secondary aligned into the correct positions and balanced play in coverage was listed as strengths. As for weaknesses, scouts worried about whether he’d draw penalties due to hands-on play at the pro level and noticed that his pursuit velocity was average in coming back to a play, especially on play-action.

After being selected by the Jets, Adams won a starting spot during the spring and missed just 15 snaps all season. He made a nice impact on defense, especially near the line of scrimmage but still needs work in playing the ball after garnering no interceptions. The Jets surprised several teams in 2017 and if they can continue to build on their current foundation, watch for Adams to have a potential breakout season in 2018.

Williams had three starts as a freshman for Clemson, recording 316 yards receiving with three touchdowns. In 2014, Williams leaped in production and caught 57 passes for 1,030 yards (an 18.1 yards-per-catch average) and six touchdowns with Deshaun Watson at quarterback. Prepared to build off of that All-ACC performance, Williams’ career nearly ended after he fractured his neck when his helmet made contact with the goal post on a touchdown catch in the Tigers’ season opener. It wasn’t until just before the 2016 season that Williams was cleared to return to the game and made up for it by becoming a second-team Walter Camp All-American and first-team All-ACC pick (84 receptions for 1,171 yards and 10 touchdowns.)

Draft scouts were impressed that Williams, a prototypical size for an NFL receiver (WR1), had recovered from a serious injury and come back tough enough to become a high-volume target at the pro level. Lance Zierlein said, “He’ll have to be coached up with his routes and releases, but he has the talent to become a big safety blanket for a young quarterback.”

The Chargers took the young prospect as a target for veteran quarterback Philip Rivers, instead, but they didn’t quite find out what he will offer to their team in 2017. Williams missed all of the off-season workouts and training camp with a herniated disc in his lower back and got onto the field in Week 6 against the Oakland Raiders. In the Thanksgiving Day game against the Dallas Cowboys, Williams suffered a knee injury that limited his ability to play effectively as the season closed. All of that means that what he was able to accomplish needs to be amplified as he works this off-season if he hopes to have a successful, difference-making 2018 season.

The son of former NFL receiver Ed McCaffrey, Christian was a talented high school player who was a two-time Colorado Gatorade High School Player of the Year who set records in scoring, touchdowns and all-purpose yardage. Stanford was happy to get him into their system where he became a consensus All-American, a Heisman Trophy finalist, as Associated Press and Pac-12 Player of the Year while setting an NCAA record with 3,864 all-purpose yards, grabbing second place in the FBS with 2,019 rushing yards and added 645 receiving and 1,o70 kick-return yards to his resume.

Draft scouts considered him to be a patient rusher who might lack the size of an every-down back after logging 300-plus carries (including on special teams) in his last two college seasons. McCaffrey was considered a physical, downhill rusher that would benefit from an offensive line that moved similarly. Concerns over whether McCaffrey had the power to break tackles and get a burst were listed as potential weaknesses, as was his lack of NFL speed at the second level.

“Multi-dimensional runner with flex appeal for teams looking for a player who can carry the ball 20 times or catch it 10 depending on the game plan. McCaffrey’s size, power and speed are just average, but he is able to create yardage for himself with his vision and elusiveness. McCaffrey’s ability to return punts and kicks could be the value sweetener that pushes his name into the first round.” –Lance Zierlein

With quarterback Cam Newton and veteran rusher Jonathan Stewart on the roster when McCaffrey came into camp with the Panthers, he didn’t get turned loose until later in the season. The rookie led the team in receptions (80 catches) and was third on the team in rushing – second among running backs – but was asked to be patient and play where the coaching staff needed him. A 56-yard catch-and-run touchdown during the fourth quarter of the wild-card loss to the Saints (on Jan 7) was his biggest play and longest gain of his rookie campaign, giving him his second career 100-yard receiving game in 2017. Moving into 2018, McCaffrey should be able to improve his ground game into a more dynamic skill set but has already secured a spot as one of the top receiving backs in the league.

At Washington, Ross quickly made his speed and athleticism known as a kick returner, blasting downfield for three touchdowns during the 2013-14 season and looked to be a big-play receiver despite getting limited opportunities. Ross took a redshirt his third year after tearing his left ACL in 2015 during spring practices. When he returned to the field in 2016, Ross earned second-team All-American and first-team All-Pac-12 honors after grabbing 81 catches for 1,150 yards and 17 touchdowns – tying him for second in the nation.

“Let’s give this kid his due. Quick and explosive. Questions about his medical. He’s got shoulder injuries and knee injuries.” — Mike Mayock

Considered “emotional” by some draft scouts, Ross displayed poor body language, at times, when he felt a play was left on the field, but his next-gear speed looked like it had the potential to rip the top off of NFL defenses if he was given the opportunity to get onto the field with a pro team. There was concern that he hadn’t learned to make contested catches, and that previous injury could hamper him at the next level, but overall Ross was projected to not only be someone that could make an immediate impact at the slot receiver position and on special teams handling kicks.

The Cincinnati Bengals drafted Ross hoping to give veteran quarterback Andy Dalton a nice target that would open up their offensive playbook. Unfortunately, Cincinnati got off to a very cold start and their offense was horrible. Head coach Marvin Lewis was heavily questioned on social media as to why he did not insert Ross into the lineup more often, especially considering his rookie receiver played the fewest snaps of any other draft selection in the first round in 2017. The answer: Ross saw injuries define his season. And with a lack of time on the field, he made rookie errors when he was inserted into the roster.

It’d be a major blow to the Bengals if they are unable to see Ross rebound in 2018 considering there were other receivers in the draft they could have selected that may have been able to help them get their offense jump-started early in the season. While Ross only saw time in three games, he had no receiving stats and was credited with just 12 rushing yards on a single attempt. He also lost one fumble.

The son of former Major League Baseball pitcher Patrick Mahomes, the young gun was raised in a football environment in Texas where the pigskin is king. Mahomes didn’t get a start for the Red Raiders until the final four games of his true freshman season but made up for it by throwing for 1,547 yards and 16 touchdowns (to four interceptions) and a 56.8 completion percentage. In 2015, Mahomes started every game and led the FBS with 393 yards of total offense per game, earning All Big-12 honors with over 4,500 passing yards. In his final season (2016) at Texas Tech, Mahomes again led the FBS, this time with 421 passing yards per game (5,025 total passing yards, 41 touchdowns, 10 interceptions and a 65.6 completion percentage). Mahomes also scored 22 times by using his legs when the pass wasn’t an option.

“Mahomes is a big, confident quarterback who brings a variety of physical tools to the party, but he’s developed some bad habits and doesn’t have a very repeatable process as a passer. Mahomes’ ability to improvise and extend plays can lead to big plays for his offense, but he will have to prove he can operate with better anticipation and be willing to take what the defense gives him in order to win from the pocket. Mahomes will be a work in progress, but he’s a high ceiling, low floor prospect.” — Lance Zierlein

Although there was little dispute among draft scouts that Mahomes had the arm to play at the pro level, there were concerns that he was uncomfortable inside the pocket, lacked patience in allowing plays to develop and too much of a gunslinger. Mahomes wasn’t known for taking what defenses gave him, but for taking risks many analysts felt would get him into trouble at the next level as pro defenses modified their schemes in more complex ways that college squads. The biggest concern was that he’d leave the pocket to use his legs, exposing himself in the open field instead of being confident in his offensive line and blocking to develop.

Although the Kansas City Chiefs had veteran Alex Smith locked for the 2017 season at quarterback, they wanted someone they could develop that may be their long-term play-caller. Mahomes spent the entirety of the season on the sideline watching Smith run the offense until the final game against the Denver Broncos. Mahomes got the start and performed well under pressure, albeit a less-than-frightening defense than Denver has shown in the past. The mistakes he made are correctable and he looks to be at the forefront of the starting quarterback conversation with Smith entering free agency.