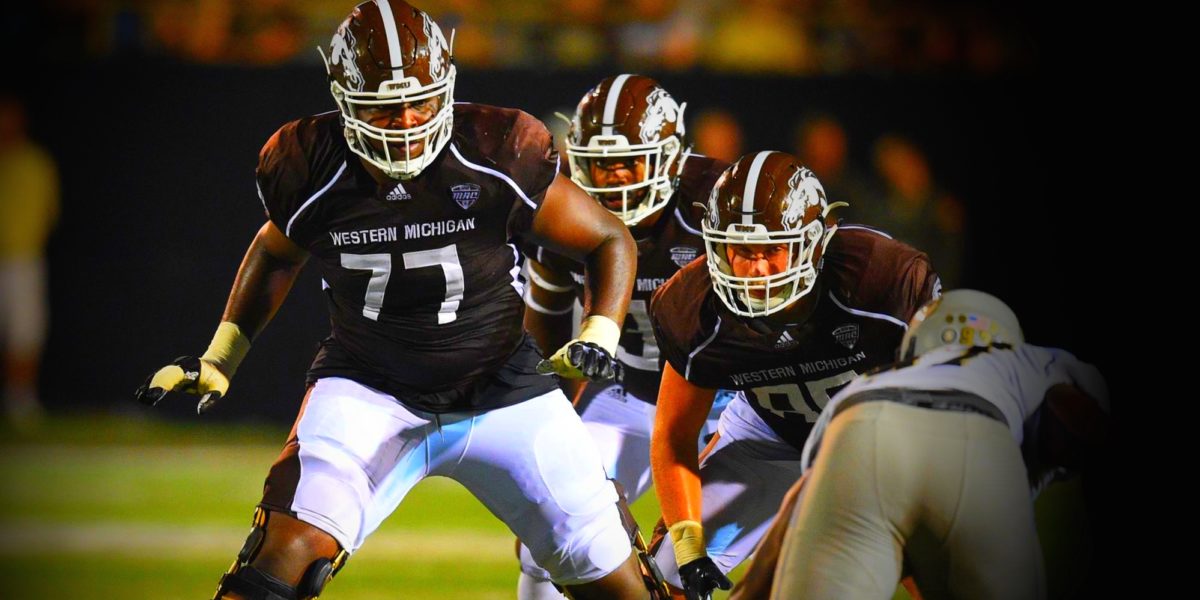 With the 92nd overall pick of the 2018 NFL Draft, offensive tackle Chukwuma Okorafor of Western Michigan joined the “Kings of the North”, Max Starks’ reference to the Pittsburgh Steelers. One area that was highly overlooked in many mock drafts was any updates to the offensive line, but with Chris Hubbard having signed with the Cleveland Browns, Okorafor is a solid addition to a line that could use depth.

Per Gerry Dulac of the Pittsburgh Post-Gazette, “Mike Munchak said he never expected to be meeting the media tonight, which means he had no idea the Steelers would take an offensive lineman before the third round.”

Munchak must be chomping at the bit to get the 6’5″, 275-pound offensive tackle. Okorafor got a late start playing football due to his family immigrating to the United States from Botswana in 2010, but he showed early athletic ability at Western Michigan, earning head coach P.J. Fleck’s trust. He began his collegiate career at right tackle before switching to the left side of the line after teammate Willie Beavers left for the NFL. “Chuka” (Okorafor’s nickname) then went on to earn first-team All-MAC honors and numerous All-American and first-team all-conference accolades for his senior season performance.

He has the prototypical size of a premier NFL tackle. He got started with football late (his family came to the US in 2010 from Botswana) and shows flashes of a solid tackle. He struggles with consistency and that will be a big issue with him as he develops. Plays with positive hand placement, especially in the run game. He looks smooth in pass protection. Played both tackle spots (was an All-American on the left side). His balance is a major concern. Is caught bending with a narrow base at times (which messes up his leverage) which will also get him in trouble in the NFL.

Here’s the thing with him: this pick likely went through Munchak. Aka, he saw something in him that he liked. Munchak is the best in the business and if anyone can tap into his potential, it’s Munch. Not crazy about the pick, but offensive line is a need that no one was talking about that the Steelers needed to address at some point to prepare for the future. Not crazy about it simply because it isn’t a major need. But there were no other ILBs really worth taking here.

Okorafor may not be the flashy, sexy pick that Steelers fans wanted (and an inside linebacker still has not been selected by Pittsburgh), but how many offensive linemen are considered ‘sexy’ until they make a great pull block into the defensive backfield and spring guys like Le’Veon Bell and Stevan Ridley? Think about that for a second. Munchak could have just snagged the next Pro-Bowl level offensive lineman for the Steelers and Okorafor will learn from guys like Ramon Foster, Maurkice Pouncey, David DeCastro, Marcus Gilbert… sounds a little hotter now, doesn’t it?

Okorafor will be a project, for sure. But with raw talent and an ability to be coachable, the Steelers looked at their team and selected for depth instead of glitz and glamour.