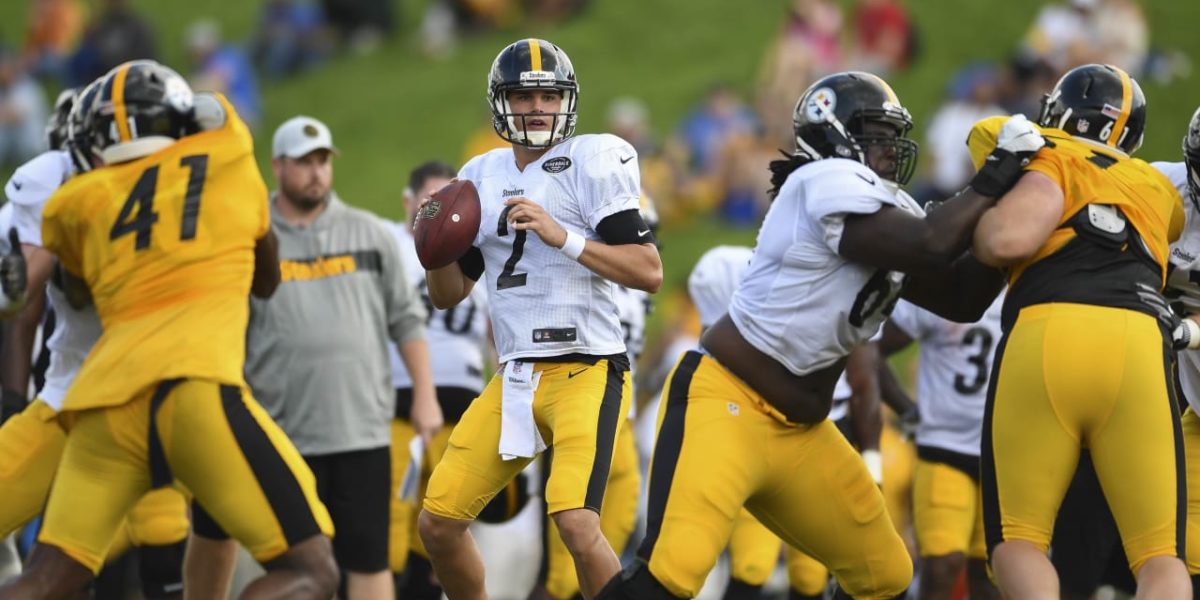 With a few days of training camp already in the books for the Pittsburgh Steelers, here is a list of early observations straight out of St. Vincent’s College in Latrobe, Pennsylvania with players you may want to keep an eye on throughout the preseason.

By looking through the sites listed here, the Steelers are the favorite to win the AFC North title. It’ll be their third consecutive division win if (and likely when) that happens. These are the players who could be part of the reason they not only rule the North, but also contend for that illusive seventh Lombardi trophy.

The Steelers third-round draft pick is already getting a load of reps as the second quarterback. Last year’s fourth-round pick, Joshua Dobbs, also saw a share of third-team reps as the team appears to be figuring out their depth chart with the two young passers.

Rudolph looks every bit as advertised as one of the draft’s top collegiate stars. He won the 2017 Johnny Unitas Golden Arm as the NCAA’s outstanding senior quarterback. Rudolph has a similar knack as Ben Roethlisberger for extending plays and is smart with the football.

All bets are off for Rudolph starting over Ben Roethlisberger but it does appear that the Steelers staff wants to find out what they have now rather than later. They already know who Landry Jones is as a player and quickly need to find out if they’ll keep him, or Dobbs, as the third quarterback on the roster.

McDonald winds up on this list as he was in the 49ers training camp last season before being traded to the Steelers at the start of the 2017 season. Therefore, this is his first offseason with the team: and it appears that Ben Roethlisberger, at least, is keen on working him into the offense.

A large volume of Big Ben’s passes were sent in McDonald’s direction during Sunday’s practice. At times McDonald beat the defense and at others, Steelers safeties (such as Sean Davis and rookie Terrell Edmunds) rose to the occasion with great coverage on the tight end.

Regardless McDonald’s name is one to watch as the offseason workouts unfold.

That describes Burns following Antonio Brown around during camp, to improve his coverage skills.

As a result, Burns has already picked off several passes throughout camp and appears to be limiting the damage that the All-Pro receiver usually does on opposing defenses. While Brown will essentially beat any other defender in the NFL at some point, this is at least promising news in Burns’ ongoing development.

Phillips is a smaller cornerback with starting experience for the Washington Redskins. Allen is one of the larger Steelers DBs standing 6-3 and weighing a slim 203 lbs. He’s rangy and uses his size well in coverage.

Either player could make a case for a spot on the final 53-man roster if they continue showing the same ability throughout camp.

Wide receivers near the bottom of the roster

Quadree Henderson and Damoun Patterson aren’t household names, but each will be fighting for scraps in a deep wide receiver group this preseason.

Patterson, who was signed out of the rookie minicamp from Youngstown State, has been getting open often and making combat catches in team reps.

Henderson, a small-sized prospect, hasn’t been as impressive but figures to change that when kick and punt return duties become the focus: he was one of the nation’s top return men playing for Pitt in college.

This may seem like déjà vu, but Xavier Grimble has looked fantastic thus far in camp. The athletic tight end was already a camp darling two seasons ago but appears to have shed any excess weight he was carrying. The result is a leaner, faster Grimble who is making the most of his opportunity.

Despite signing on for only one more season with the Steelers, I anticipate that the “X-Man” will be the team’s third tight end on the depth chart easily. Aside from those ahead of him on the roster (McDonald and Jesse James) the rest of the tight end group isn’t even close to competing.

Rugby star Christian Scotland-Williamson is a physical specimen as well, but his best path to being a Steeler in 2018 may be special teams and practice squad duty.