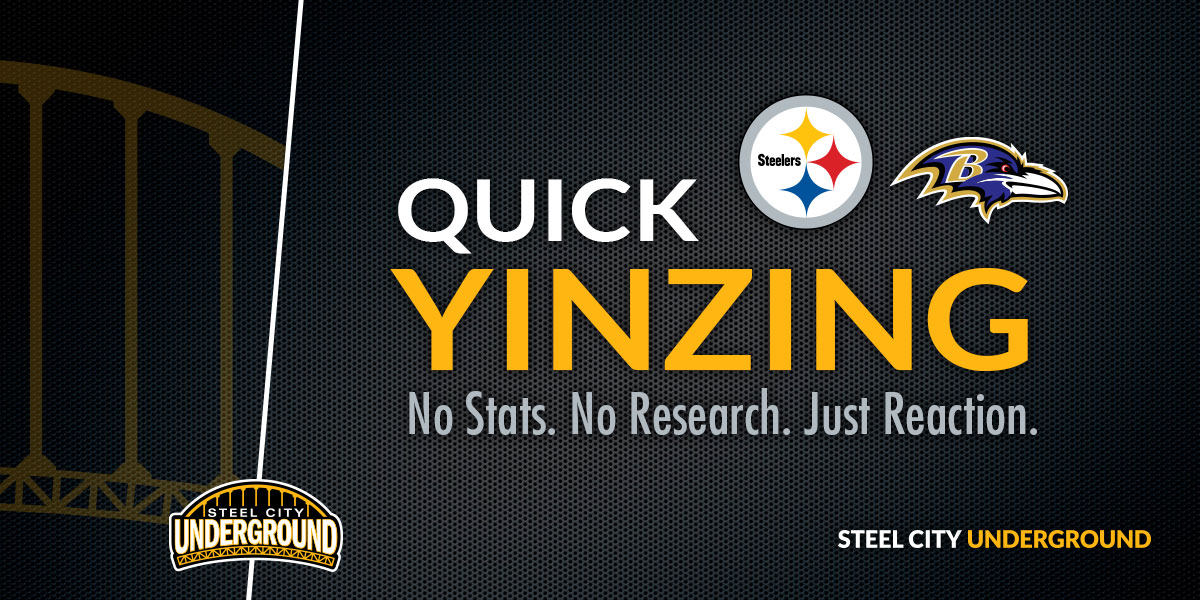 Welcome to “Quick Yinzing”, a fast reaction article where a member of the SCU staff gives their initial post-game impressions without digging into any films, stats, or other analysis. It’s as real as that car ride home or sobering down at the bar following the game!

There weren’t many positives to take away from the Pittsburgh Steelers as they dropped Sunday Night’s game to the Baltimore Ravens in front of an unhappy home crowd at Heinz Field by a score of 26 – 14. Once again, the defense was abused by a team that was not particularly spectacular on offense but did enough, especially when they took advantage of the Steelers’ inability to effectively cover the middle of the field. This loss wasn’t all on the defense, however. Pittsburgh’s offense was flat in three-of-four quarters; their best performance offered during the second quarter. The loss is a big disappointment and should give pundits and naysayers plenty to talk about – as if they needed more negativity to add as fuel to the bonfire they’ve been prepared to light since the opening of the 2018 NFL regular season.

I respect Antonio Brown. I respect Ben Roethlisberger. I’m not one to jump on a guy when he’s down; or two guys, in this case. Throughout the game Sunday night, it was obvious that Roethlisberger wanted to find Brown for big plays – badly. Roethlisberger and Brown didn’t always seem to be on the same page of the playbook but still connected on a touchdown play that may be the only big highlight of the game. The lowlight? When Roethlisberger had an opportunity – albeit small due to the defense allowing the Ravens to chew clock in the fourth quarter – to make a big play and forced a pass to Brown who was covered by at least three defenders. Anthony Levine would come up with an interception that shut down any opportunity for the Steelers, who were down by nine points, to mount anything.

Question: If Brown was frustrated for not being targeted and given chances to make big plays as a competitor in previous games, how frustrated is he after this game with the knowledge that his being a forced target was, in part, the cost of a game? Again, I respect Brown and the relationship he and Roethlisberger have with each other, but there has to come a time this season when both men look around them and realize that they have to learn to trust teammates. They aren’t the only ones that need some team-building opportunities off the field.

That leads into the second part of the story of Sunday night’s game: the defense. It’s been four weeks. Add OTAs, training camp to that time period and the Steelers should understand what their assignments are, what schemes to run, how to communicate with each other, tackle, play the gap, and everything required to be on the field. That’s not the case, apparently.

Joe Flacco was able to utilize a game plan that took advantage of the continued struggle by Pittsburgh in protecting the middle of the field. If the Steelers played conservative, giving up the underneath, Flacco would look for a long option. If the Steelers sent the pass rush, he’d find one of his tight ends or halfbacks in the middle of the field on slants or short screens. Flacco told the media after the game that he was disappointed that his offense didn’t put up more points in the game instead of relying on Justin Tucker field goals for second-half points. The thing is that the Ravens probably should have scored more.

There were a few stand-out moments. The Sean Davis strip just outside the goal and resulting in a fumble recovery by Terrell Edmunds gave the Steelers offense an opportunity to get back on the field. Roethlisberger had a nice play, that he extended under pressure, finding JuJu Smith-Schuster for a long pass-and-catch for a needed first down on a long drive. Vance McDonald made up for an early fumble/strip by once again making some tough catches and powering through defenders attempting to bring him to the turf. Bud Dupree and Javon Hargrave both logged sacks in the game. Chris Boswell made every kick that he was called upon to kick. Ryan Switzer showed why he’s a valuable addition to the team by making some nice catches and needed first downs.

Overall, this is a team in desperation mode. Their defense isn’t working, even with personnel package changes and reported simplification. Uncharacteristically, the offense was completely flat once the Ravens took the run game away and forced the Steelers into a shoot-out. Pittsburgh has a lot to figure out before they face the Atlanta Falcons if they hope to resurrect this season.