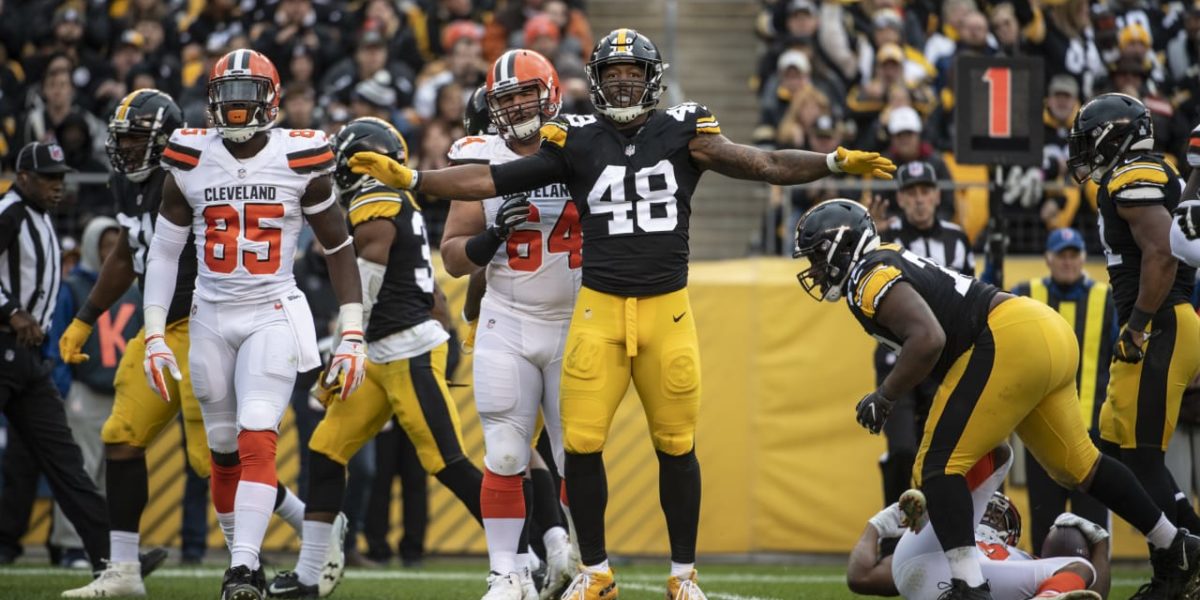 Regardless of your feelings about Pittsburgh Steelers 2015 first round draft pick Bud Dupree, be it positive or negative, one thing is for certain as the organization heads into the 2019 NFL offseason: they have a big decision to make with the starting outside linebacker.

Rewinding over his four-year career, I’ve always been a Bud Dupree defender. Many critics want to label Dupree a “bust”, comparing him to a previous first-round draft pick in 2013, Jarvis Jones.

That’s always been an unfair comparison, as Dupree may not find the quarterback as often as we’d all like, but he’s never fallen out of grace as an NFL starter since taking the mantle (unlike Jones, who started getting benched in his final Steelers season). The stats also speak for themselves, as Jones only had six career sacks as a Steeler, while Dupree has had 20… and that’s after missing nine games on IR in his second season.

I often argue that Dupree is utilized differently from his peers. Everyone wants a Joey Porter, Kevin Greene, James Harrison or LaMarr Woodley “sack the quarterback” style outside linebacker. While that’s great, Dupree is an athletic freak who often finds himself among the league leaders in players who drop into coverage.

Falling back to cover in the passing game is a lot different than pushing forward to get after the opponent’s passer!

Alas, while those will see a glass-half-full or half-empty with Bud’s first four years in the league, there’s a bigger offseason decision looming that could see the Steelers head in a different direction. As a first-round draft pick, the team opted to use their fifth-year option on Dupree for 2019. Those options for a fifth-year on a player’s rookie contract only apply to those players selected in the first round of the NFL Draft: think of it like a rookie contract franchise tag extension.

According to the league:

The option allows a team to retain a player’s rights for five years rather than the standard four, which is the bonus of selecting a player in the first round. In order to extend the contract, the team must inform the player during the period between the last regular season game of his third contract year and May 3 of the next League Year (Art. 7, Sec. 7, (a), 31).

That means that the Steelers made this decision last season but also have another decision to make this season. A fifth-year option has two sets of conditions: the salary for those selected in the top ten and everyone else. For Dupree, who was selected 22nd overall, this means a payday set as a calculation of an amount equal to the salary of the Transition Tender (set in Article 10, Section 4 of the CBA) for the player’s fourth contract year, but defined by the 3rd-25th highest Prior Year Salaries for the player’s position.

In plain English, Dupree’s fifth-year option is worth $9.232 million: and is fully guaranteed for injury or if he is on the roster the first day of the 2019 league year. The last part of that sentence is the important part: the league year begins at 4:00 p.m. New York time on March 13th.

That puts a deadline on what the Steelers future plans are. Do they release Dupree prior to March 13th or do they proceed to pay for a player who has had 20 sacks over 3.5 seasons?

That’s the $9.2 million-dollar question. Is Dupree worth this big payday or would the Steelers be willing to release him and look elsewhere to spend that money in free agency?

I suppose that all depends on who is available: and that’s largely based on who is left. Contract negotiations with free agents are permitted starting March 11th and it’s truly unknown what pass rushers may re-up with their current clubs before the league year begins. If the Steelers cut ties with Dupree, this leaves their cupboards quite bare: they still have T.J. Watt, Olasunkanmi Adeniyi, and presumably practice squad player Keion Adams, but that’s about it. Even Anthony Chickillo is set to hit free agency unless the two parties strike a deal this offseason.

That makes letting Dupree go a double-edged sword. On one hand, it’s the devil you know, and on the other, you could theoretically improve with spending that $9.2m on the devil you don’t.

There’s always the possibility of acquiring a pass rusher in the draft, but then again, isn’t this how we got to where we are now? The Steelers have drafted for this need with the top pick overall three times since 2013 with Jones, Dupree, and Watt. Will they make it a fourth in 2019? Or can they find value elsewhere?

That’s such a gamble that the team may just stick with Dupree for another season… or beyond. Another possibility is that the two strike an extension which pays Dupree what he’s owed but also stretches that dollar further for the Steelers. That may be a tough sell for a high draft pick looking for his first contract beyond his rookie deal. But Pittsburgh also has other decisions to make, including situations with Antonio Brown, Le’Veon Bell, and Ryan Shazier that could leave other positions in limbo.

Would the Steelers say goodbye to Dupree, creating another potential hole on their 2019 roster?

This is yet another headline worth watching as we progress toward March 13th, as this may be the first big decision the Steelers have to make heading into the new league year.