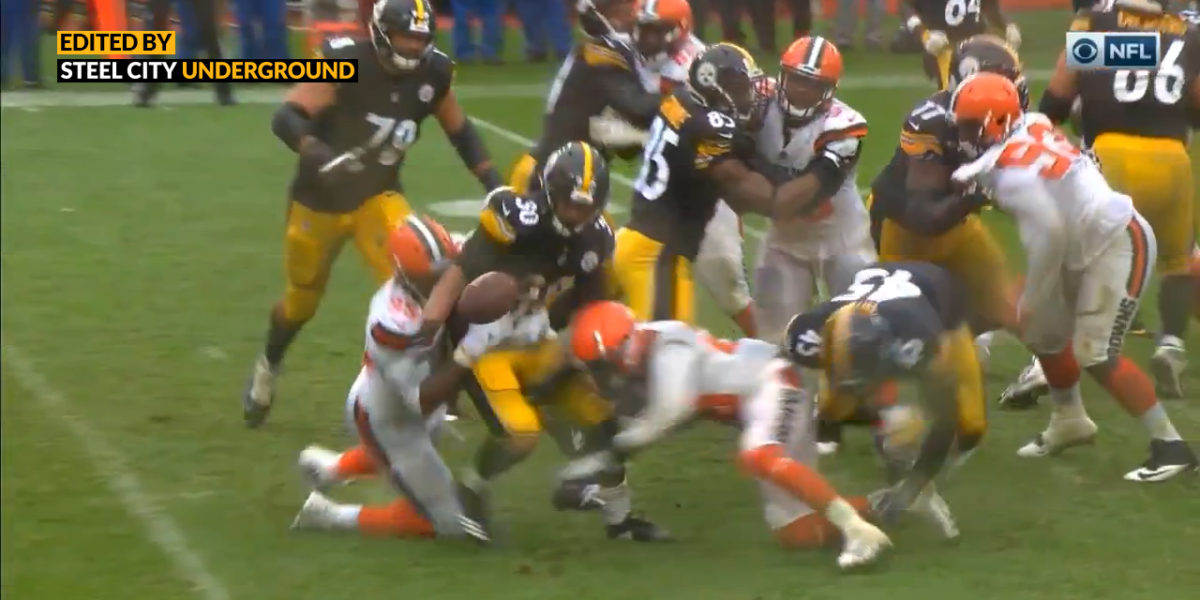 Who knew just how pivotal a Week 1 game could be in the grand scheme of things.

The Steelers traveled to Cleveland for an AFC North showdown with the Browns to open the 2018 NFL season, as First Energy Stadium provided the backdrop with a cold and rainy September football game which would set the tone for both teams later in the season.

The game was slow-going at first. Neither side could score in the first quarter and it took until 11:19 for the Steelers to strike. They would go into the half up 7-0, but find themselves tied 7-all as Cleveland scored first in the third quarter.

Pittsburgh would unleash an offensive onslaught throughout the third quarter, seemingly waking up from a slumber that saw them gain a 21-7 advantage heading into the fourth quarter.

Then, disaster struck. Several turnovers threatened a Steelers victory, with this James Conner fumble putting Cleveland within one score.

This “turning point” followed the Steelers defense standing tall on 4th-and-5, forcing a turnover on downs and giving the ball to Ben Roethlisberger and company. On the very next play, Big Ben would hand off to Conner, making his very first NFL start in place of the holdout Le’Veon Bell. He would be stripped by another second-year player, the 2017 NFL Draft’s top overall pick Myles Garrett.

Another former first round draft pick, Jabrill Peppers, scooped up the ball and is amazingly stopped short of the goal line by a diving Roethlisberger tackle.

Alas, it wasn’t enough as Browns RB Carlos Hyde would pound the ball in from one yard out, bringing the score to 21-14 Steelers.

Unfortunately, it was Conner’s fumble which got Cleveland within a tie – something the opponent would do with about two minutes left in the game. Neither team would score the remainder of regulation, nor in overtime, giving each side a tie on their record which would factor in heavily for the division standings throughout the season.