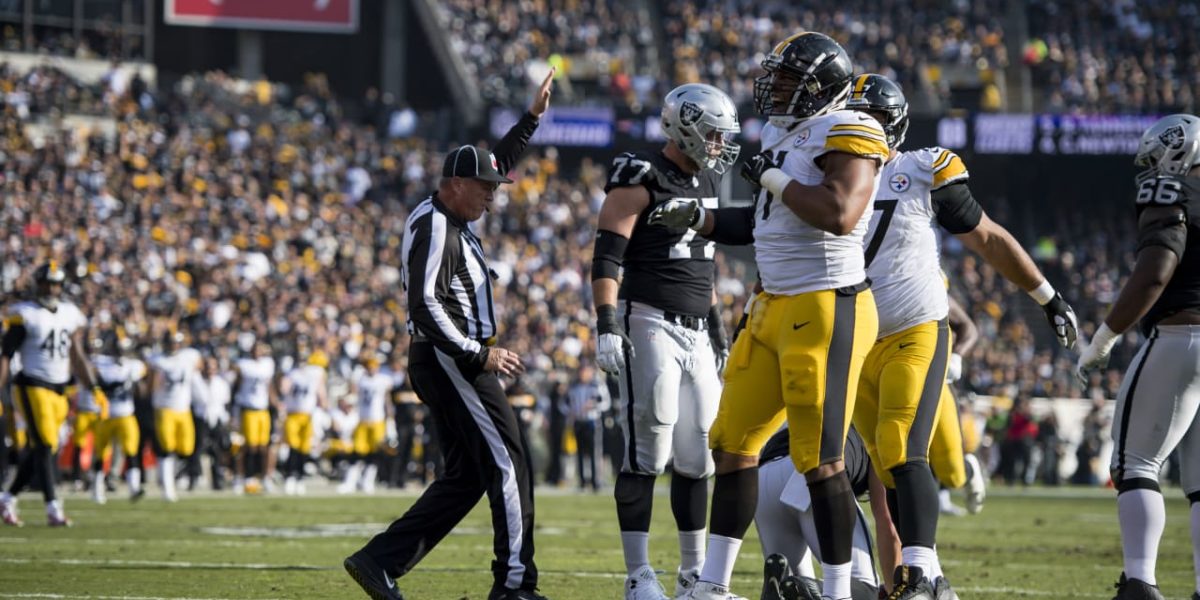 How can the NFL fix it’s officiating problem?

Football fans saw it during Championship weekend: the Saints didn’t receive an obvious pass interference call, Tom Brady wasn’t “roughed”, and Julian Edelman may or may not have muffed a punt.

Steelers fans, however, saw it all season: missed false starts, missed snap infractions, missed blocks in the back and bad pass interference calls.

Going back to “Jesse James caught it” the NFL admitted it had a problem with what was and wasn’t a catch. This offseason, they’re going to have to address a bigger issue: how individual calls that have no way of being reviewed under current Instant Replay rules need to be.

Here are some of my proposals on how to fix the officiating problems in the NFL.

Many old-time NFL referees are stepping away from the game, at a time where a lack of experienced, good officials, is evident. Based on the track record of those working the final games this season, no official is immune to bad calls (or no calls). I have more ideas on how to help them and it begins with not only recruiting more referees to replace those retiring, but also finding a way to keep those who no longer run up and down the field in the fold.

Rather than having Dean Blandino and others sitting in the TV booth, they need to move over a seat in the pressbox or another designated area to assist the officials on the field, as well as train tomorrow’s head officials.

I believe the replay system is broken. It should help the officials get more calls right, but instead, it helps create more controversy by giving too much leeway for judgment calls to reign supreme.

With getting it right in mind, the league needs to revamp the way it uses replay and replay officials. Starting with the latter, I don’t like the idea of having a handful of suits in New York watch one (or during the regular season, multiple) games, then determine something which appears to be completely out of sync with what occurred on the field.

When calls are obvious to everyone watching, and not just the couch-watching biased fan, something has to change. The officials need help and that help may be a complete overhaul of the replay system as well as more support from experienced referees who are fed-up with the scrutiny and are leaving in droves.

Assign a referee, or multiple referees, to watch a single game much like FIFA does with soccer. Those soccer referees observe from afar, but only watch their game. Often, they are current referees who are getting rest from running up and down the field. In much the same way, the NFL could offer to have some of their recently retired, and vastly experienced, referees join up-and-coming officials in observing games. However, they must also be more involved than this “command center” is in New York.

A lot of critics want coaches to get more challenges or be able to challenge more plays. I don’t believe that slowing down the game helps matters, nor does it lend more credibility to the referees. In fact, I believe that the referees do the best job that they can: but the game is so fast and there are so many different angles which can affect a human perspective of what that referee is actually seeing in real-time.

Enter the middle ground: where this group of game-specific replay officials is in contact with the lead official or a point of contact on the field who can get the referee’s attention. All of the referees in the NFL now where electronic communication devices, so this isn’t too far from what FIFA implemented with the World Cup. When there’s something controversial on a judgment call, replay can intervene and potentially overturn a bad decision.

I still think that will lend itself to criticism, but one area it will not is in matters where an act only has to occur to be a penalty. Replay officials should be able to stop a game within an instant when they determine acts such as false starts, offsides, or delay of game penalties occurred. This avoids situations such as where the LA Chargers scored a touchdown on a play where a blatant false start penalty was missed, leaving half of the Steelers defense standing still looking for a flag.

Allow more calls to be challenged

As I’ve mentioned, I’m not into stopping the game more often by giving coaches more challenge flags in their pocket, however, the times when they’re allowed to throw the red hanky onto the field should be expanded.

Yes, that means pass interference calls, which carry with them a huge penalty when called. Proper replay should help enforce things such as a blown false start call, but I’d allow that to be challenged just so a team can’t run a quick play and circumvent the replay system in place, who may still be reviewing the call.

It may still become a matter of judgment, but it’s better than the current system which allows nothing!

It blows my mind that in 2019 we still can’t determine if a ball has crossed a goal line or where a ball should be spotted on pivotal first down conversions.

It would (literally) cost the NFL nothing to have more cameras installed on the goal lines. I’d even go as far as to start using drones too!

But aside from adding more angles to see what’s happening down on the field, do we think the NFL can also borrow from FIFA and use goal line technology to determine where the ball is spotted? Soccer had a huge problem with close goal or no goal calls, and the recent World Cup corrected the issue by “chipping” balls to help determine whether or not the goal is valid.

I don’t see any reason why the NFL can’t do the same with some form of RFID or GPS technology. This would help the referees on the field know if they should also stop the game prematurely, or allow a close score turned fumble to play out.

It can also help with close spots and determining first downs. My proposal wouldn’t get rid of the dated chain gang with down markers, after all, someone needs to spot the line of scrimmage and line to gain; plus those sticks would hold the tech necessary for seeing if the ball broke the marker for a first down.

It’s high time the league focuses on getting it right as opposed to the 60% threshold they feel is acceptable for correct calls. I’m well aware that the referees have a lot of pressure on them and they need to justify their positions in order to retain their jobs. However, the proposals above can only help those same referees have a higher success rate at getting calls right, which would help the overall product on the field and its credibility.

But first, those referees have to set aside their egos. If replay officials overturn a call, let it go. If a ball is determined by technology to break the plane, side with the technology.

In this way, winners and losers should be more effectively determined without an individual call impacting the game. It may be a difficult transition, but there’s a big difference between one referee getting the call right as opposed to the entire referee team getting it correct and properly doing right by the game.

I feel that these changes, and perhaps others, are necessary in restoring the integrity of competition and ensuring that the spotlight remains on the players: not the referees.

2 responses to “How can the NFL fix it’s officiating problem?”