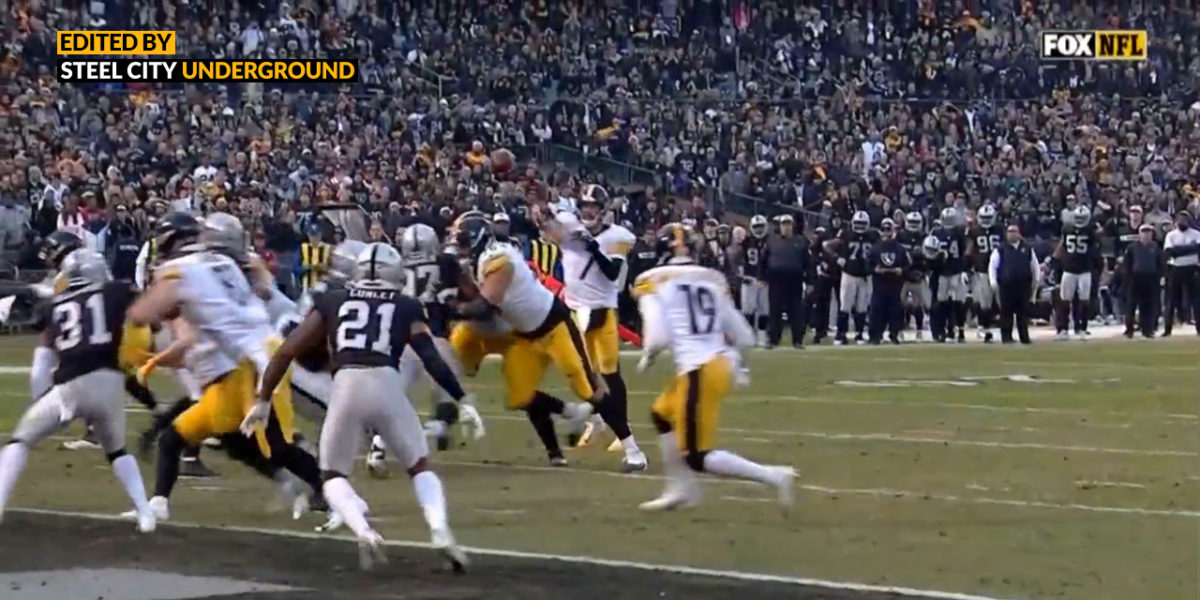 Plays of the Year: Dangerous pass puts Pittsburgh ahead with three minutes remaining

In Week 14 of the 2018 season the Steelers looked to rebound from consecutive losses to AFC West teams with a trip to a location they rarely ever win at: Oakland.

The Raiders were a lowly team and didn’t appear to be much of a threat: however, the game would prove to put the Steelers season in jeopardy as they fought to keep pace throughout the game.

There was a time during that Sunday afternoon when it looked like quarterback Ben Roethlisberger would not see the field again after taking a hard sack in the third quarter. Joshua Dobbs tried to keep the Steelers offense moving, but the Raiders took the lead, 17-14, with 5:20 left in the game.

But Roethlisberger wasn’t done and neither was JuJu Smith-Schuster, who had an outstanding performance on the day despite the Steelers loss.

With 3:00 on the game clock in the fourth quarter, after orchestrating six plays to get the Steelers offense inside the red zone, Roethlisberger threaded a dangerous pass to Smith-Schuster that initially looked as if it would be picked off.

Instead, Smith-Schuster kept his eyes on the ball and protected it, spinning into the end zone with a defender wrapped around him – the Oakland linebacker playing against a run having barely missed the ball by millimeters.

The touchdown, due in part to legal picks by Jesse James and Ryan Switzer, gave Pittsburgh the lead, 21-17. With just over two minutes remaining in the game, the Raiders had a single timeout left.

On the drive, Roethlisberger, sore ribs ignored, took the offense down the field by completing six-of-six passes for 70 yards and earning the rest from penalties committed by Oakland.

It was an amazing play and illustrated just how high of a level Smith-Schuster has been playing opposite Antonio Brown this season.