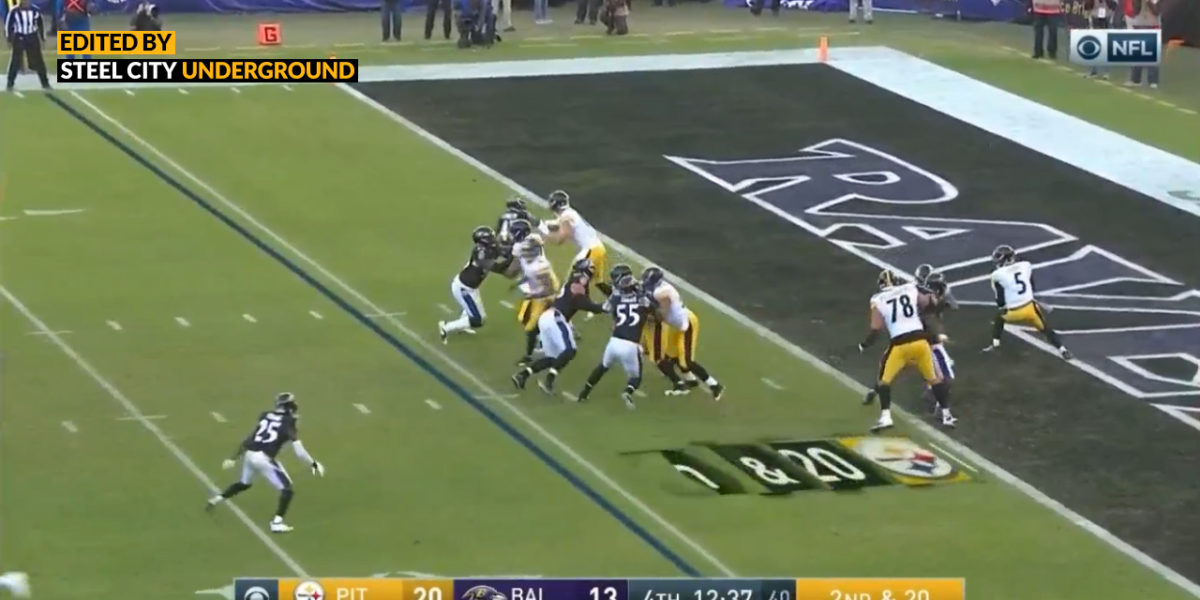 When the Pittsburgh Steelers traveled to Baltimore to face their rivals in the Ravens in Week 9, they were focused on grabbing control of an AFC North division that was in flux. In what had been a relatively lackluster game, as the fourth quarter got underway, the Steelers defense had done their job and forced the Ravens to punt. Once the ball was placed at the Pittsburgh 15-yard line, things became a bit bizarre and the mantra of ‘next man up’ actually helped the Steelers get the boost they needed to finish the game with a victory.

Ben Roethlisberger had his back to the end zone and the Ravens were looking for a potential safety. As soon as the ball was snapped, Roethlisberger was forced to get out of the pocket almost immediately and run to the sideline and the first-down marker. Unfortunately, Za’Darius Smith was in hot pursuit and drove Big Ben into the turf onto his throwing shoulder.

Things looked bad with Roethlisberger in obvious pain, forcing an injury timeout to be called. As the training staff got the quarterback to his feet, second-year backup Joshua Dobbs trotted onto the field. Instead of going conservative from their own five-yard line due to a holding penalty called on Alejandro Villanueva on the Roethlisberger scramble, Dobbs ignored second-and-20 and threw a smoking hot dark over the middle of the field to a wide open JuJu Smith-Schuster for 22 yards and a critical first down.

Dobbs’ hookup with Smith-Schuster allowed Roethlisberger time to get the air back in his lungs and as he returned on the very next play, Big Ben was able to find tight end Jesse James open on a double move against Brandon Carr for a 55-yard gain and James’ career-longest catch-and-run. It became the longest play from scrimmage the Ravens, as the top NFL defense heading into the week, had allowed to that point in the season.

Dobbs gave the Steelers the boost they needed in what had been a game without much to put in a highlight reel. The Steelers defense dialed up the pressure with Bud Dupree and Vince Williams combining for a swarm sack. When Stephon Tuitt then dumped Joe Flacco into the turf, it ended Baltimore’s opportunities late in the game to attempt final-second heroics.