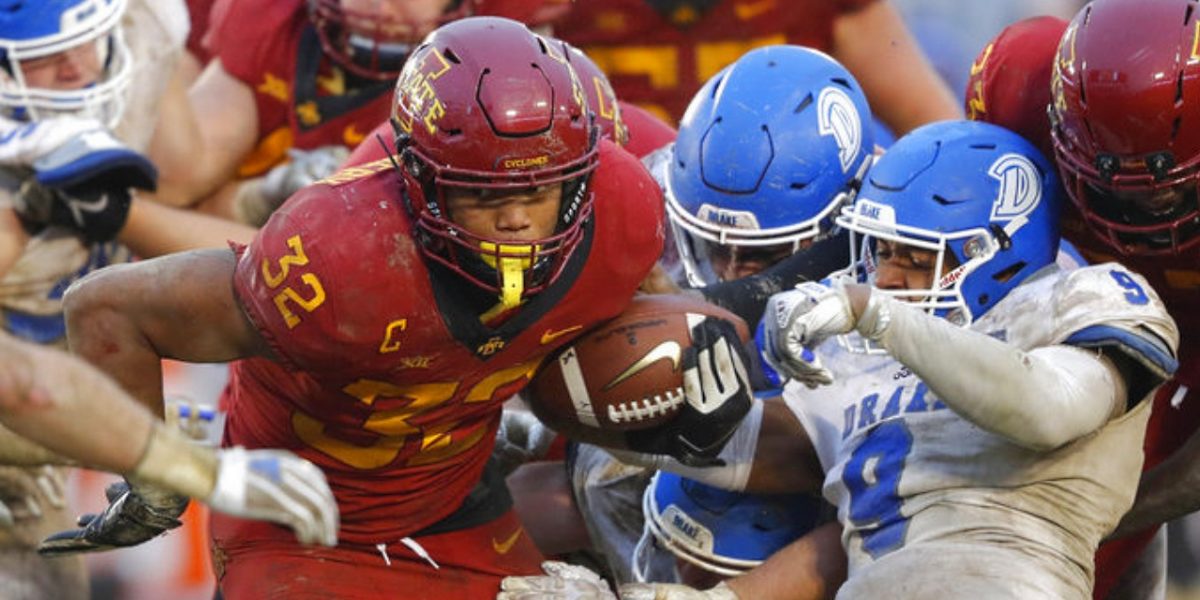 Unless you follow the Big 12, you may not be familiar with running back David Montgomery. An unheralded three-star prospect out of (Cincinnati) Ohio, Montgomery was rated as just the No. 1,203 overall player in the 2016 recruiting class per 247 Sports. A dual-threat quarterback in high school who earned Division III Ohio Player of the Year honors from the Associated Press after his senior season(2,707 yards, 41 rushing TDs), not many schools outside the Midwest thought he’d fit their program. Iowa State Cyclones head coach Matt Campbell saw something special and turned Montgomery into a prospect that should fit well on an NFL roster with a team in need of a versatile back.

Montgomery had a solid campaign as a true freshman despite splitting playing time with Mike Warren, playing in all 12 games. His breakout came in 2017 when the rusher became Iowa State’s workhorse, recording 1,146 yards on the ground with 11 touchdowns on 258 carries. With decent hands and good ball skills, Montgomery added 36 receptions for 296 yards. That performance was good enough to earn the young player first-team All-Big 12 nods that season as he led all Cyclones rushers.

The AP felt his junior season (2018) would be even better, and they weren’t wrong.

Former Texas Tech Red Raiders head coach Kliff Kingsbury, now head coach of the Arizona Cardinals, predicted last October, per Randy Peterson of the Des Moines Register, that Montgomery would do well at the next level. “He’s as good as any back in the country as far as being a complete back… (Texas Tech hasn’t) tackled him in a couple years,” Kingsbury said. “He’s going to be a heck of a pro for somebody. He’s an every-down back, and from what I’ve heard – he’s a heck of a kid, too.”

Proud of you and can’t wait to watch you on Sundays. pic.twitter.com/eKC5n6sT0u

At five-feet-10 inches, 222 pounds, Montgomery has remained in the Top-10 for most draft analysts. Mel Kiper, Jr. listed Montgomery as the fifth-best at the position while NFL Network analyst Daniel Jeremiah listed him as one of the Top-50 prospects in the upcoming 2019 NFL Draft.

He is just fun to watch. He’s one of my favorite players in this draft… I try to go through and highlight four or five guys at every position… and David Montgomery is one of those guys for me. – Daniel Jeremiah (NFL Network)

Chris Trapasso of CBSSports.com compared Montgomery to Pittsburgh Steelers running back James Conner, saying, “Like Conner, Montgomery isn’t a burner… but the two backs have been blessed with tremendous ‘contact balance’… It allows them to stay on their feet to gain extra yards without being risky lower-the-head, look-for-contact ball-carriers.”

Montgomery should be attractive to NFL teams that utilize a power rushing offense. His ability to break off of first contact and cut out of the point of attack allows him to spring free into the second level. He has shown the ability to pass-protect due to a sturdy frame and ability to keep his hips low and isn’t afraid to step up into interior gaps. A ‘grinder’, Montgomery will push up the field for extra yards and does well with a high volume workload. Even better, the former Cyclone had zero injury issues throughout his collegiate career, proving durable.

Montgomery has the soft hands to make the catch, but his best skill is his balance. He runs with a low center of gravity and is as aggressive towards tacklers as they are in attempting to bring him to the turf. Behind a solid offensive line, Montgomery should help set the tone in an NFL team’s run game and has a no-quit mentality and motor.

When Montgomery has been behind a line that wasn’t strong enough to open gaps, he had issues visualizing a new hole to run into. That could pose a problem if he were to be taken by a team that has weaknesses along their offensive front at the next level. As a runner, he has a thick base and likes to lower himself as contact comes, which can be brutal but also a risk to his ability to get out of a pile-up if his offensive line is pushed into the backfield.

Montgomery lacks the natural speed to out-run fast defenders in the open field and made his most explosive plays in college when he was able to see the entire field and dodge efforts, using his brute strength and balance, to get upfield. He’d be a poor option in plays that require the halfback to get into open space for a long, breakout touchdown. Quick linebackers on the edge are likely to keep Montgomery from stretching a play on the outside.

At the pro level, Montgomery will need to improve his patience as a runner. In the past, he’s had a tendency to try to bounce runs inside – with a cost. Due to limited overall quickness, he took tackles for a loss that could be costly unless he is paired with a running backs coach that helps him trust the blockers ahead of him. He does have a good feel for cutback lanes but will need to be less inclined to make his own path versus taking what he’s given if he hopes to break big plays in the NFL.

Montgomery has the skills, insane balance and toughness to play well as a pro. With a deep running back class in 2019, he will likely be a late first-round to second-round selection. He has the potential to fall to the top of the third round if teams feel his speed is an issue, but his Pro Day 40-yard dash time was a big improvement from the Combine.

Teams won’t have to reach for him, but if Montgomery is there and they need a solid option in the run game, he would do well behind a veteran his first year or even better paired in a one-two combination situation.

A scouting director with an AFC team reportedly told NFL.com, “That’s my guy! If he gets with the right team, he’s going to be the best running back to come out of this class and you won’t have to draft him early either.”

Montgomery may just be a sleeper in this draft class and it’s not a stretch to believe he may land in the AFC North unless Kingsbury liked him so well that he grabs him for the Arizona Cardinals roster behind David Johnson.