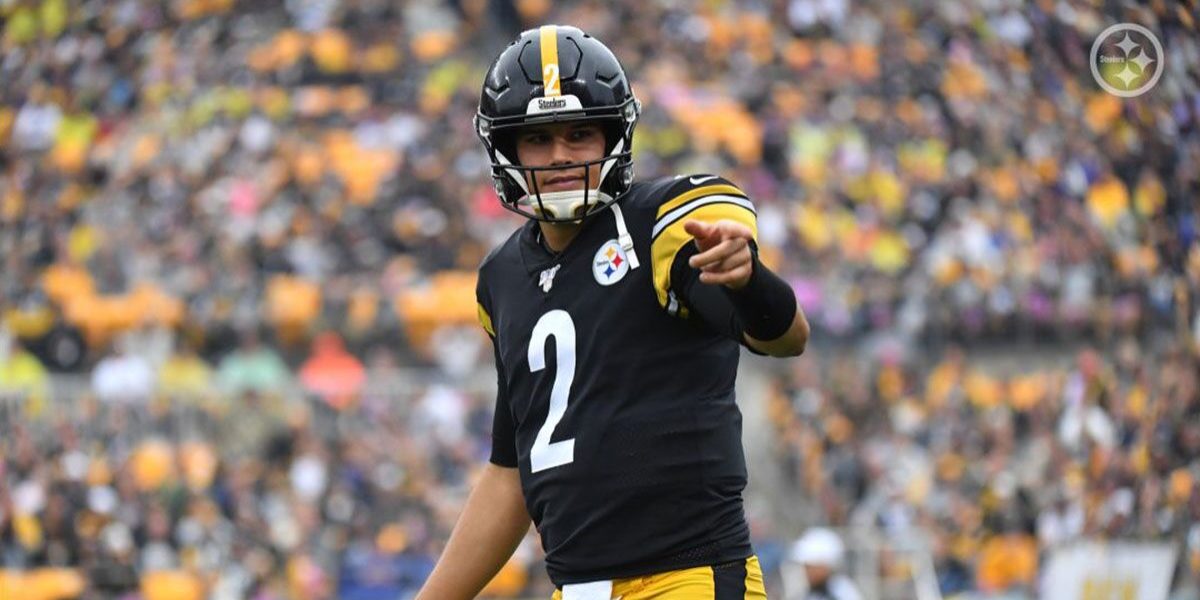 Creating a non-existent quarterback controversy in Pittsburgh is ridiculousness

For the majority of Pittsburgh Steelers fans, a lack of ‘drama’ and controversy has been a welcome relief even if those same fans are worried about how their team will perform week-to-week. For other NFL and Steelers fans, and even some media types, there’s nothing to talk about after the games have been played but something that will create debate and speculation. It may just be a sign of our times but it appears that social media spurs as much contention and squabbling over ‘topics’ as shock-jocks used to just to get people to tune in to their radio shows and in-laws did at family gatherings during holidays. To be clear, however, creating a non-existent quarterback controversy surrounding Mason Rudolph and Devlin Hodges after the last two weeks of play by the Steelers is ridiculousness.

Steel City Underground podcast hosts (and generally great guys all around who are the glue to our little team) Joe Kuzma and Brian Roach brought up the controversy – or lack thereof – during a recent episode of the show. If you haven’t listened to the broadcast before, I invite you to do so. If you did listen, I encourage you to go back and listen again. They brought up some fantastic points even though I have some of my own surrounding the quarterbacks for the Steelers.

It started with ‘Big Ben’ and training camp

Don’t be fooled by the header. In no way is Ben Roethlisberger responsible for fan speculation over a potential quarterback controversy. In fact, he’s simply been thrust to the side since the injury to his throwing arm that forced him to reserved/injured for the remainder of the season. The rumblings of conspiracy started clear back in training camp before the 2019-20 NFL regular season even kicked off.

The initial whisperings and debates began traveling the grapevines of professional football while Joshua Dobbs was in camp with Rudolph and Hodges. I’d go so far as to say a certain site or two (not SCU) promoted a tiny bit of the talk with ongoing near-daily training camp chatter that included giving “grades” on performances based on practice.

Training camp is not an effective, intended, or reliable measuring stick for how a player will play during the regular season. But, with little to talk about during what is the end of the offseason and the ramp-up to the preseason hype, there tend to be a couple of stories every single year that develop during camp and seem to keep being revisited later on. This year it was whether the Steelers would see someone other than Dobbs become the “backup” to Roethlisberger and if so, who it “should” be. When the Steelers brought in Brogan Roback, it just generated more talk. Unnecessary noise.

And then there was the Dobbs saga

After it was publicly announced (by one or more of those sites I mentioned previously) that Dobbs was off to a rocky start – a completion percentage of “40%” of his passes in the first four practices (keyword: practices) – the hum that Dobbs would not make it out of camp began. Dobbs did make the cut and during the preseason he struggled. That doesn’t necessarily justify the previous chatter but it certainly added fuel to the fire that Dobbs was about to slide on the depth chart to Rudolph who had a better showing.

To be fair, Rudolph did look better than Dobbs during the preseason. And since Roethlisberger had been reported to have claimed Rudolph was a waste of a pick (when he really said he was “surprised” the Steelers took a quarterback in the 2018 NFL Draft), there was a little fuel to throw on the fire because, hey, why not cheer for Rudolph because he’s obviously been made the underdog here? The thing is, while Dobbs didn’t look as good as Rudolph did in running the preseason offense (mainly depth players looking to make the roster), the sample size is a bit skewed when it comes to stats because the number of snaps was not evenly distributed during the preseason. The personnel on the field was not evenly distributed between the quarterbacks, either.

Toss in all the talk that Hodges looked better and played better than Dobbs and a fully-fueled quarterback controversy was brewing.

If the decision on who to keep versus let go was based purely on the preseason stats (minus snap count numbers and personnel on the field with the quarterback(s) in question), then the Steelers absolutely made the right decision to keep Rudolph and Dobbs as their backups to Roethlisberger. Hodges played well but his statistics do not justify the idea that he was outpacing Dobbs by a large margin, as you can see in the table below.

The Steelers saw Dobbs’ value and offered a trade to the Jacksonville Jaguars (who desperately needed depth at that position) in exchange for a fifth-round pick in the 2020 NFL Draft. The Steelers then signed Hodges, who showed a lot of moxie, to the practice squad… not to the starting roster. That’s key in this discussion because the Steelers entered the 2019-20 regular season carrying just Roethlisberger and Rudolph as their quarterbacks to bolster other areas where depth was a concern.

Will it be a ‘Duck’ dynasty or the Rudolph era?

After Rudolph held his own in his first NFL start against the San Francisco 49ers, completing 14-of-27 passes for 174 yards, two touchdowns to one interception, despite the offensive line offering him less coverage than they typically had done for their quarterbacks last season, the young signal-caller earned the win over the Cincinnati Bengals and looked like he had rallied the offense around him. Then the unthinkable happened. Against the Baltimore Ravens, Rudolph was literally knocked unconscious and laid on the field for quite some time.

Enter ‘Duck’ Hodges who was promoted to the active roster on Sept. 16 after Roethlisberger had been moved to reserve/injured that day. Hodges wasn’t spectacular but serviceable on Oct. 6; he completed seven-of-nine passes for 68 yards in the three-point loss. Before the game, the Steelers had signed Taryn Christion to be their practice squad quarterback to prepare for Lamar Jackson and cut him six days later before adding Paxton Lynch to the practice squad on Oct. 11. That seems to indicate that the Steelers at least believed Hodges was a short-term fix until Rudolph was cleared from concussion protocol.

When Hodges helped lead the Steelers to a win over the Los Angeles Chargers, however, the creation of the non-existent quarterback controversy came to fruition. Hodges has a cute nickname. Hodges is an even bigger underdog than Rudolph because he went undrafted and beat out Dobbs. Hodges is likable. Hodges has a certain swagger to his character that gets people excited. Plus, who doesn’t love a winner?!

Putting this all to bed because there is no controversy

Rudolph has cleared the concussion protocol. He has shown no signs that the shot he took to the head that knocked him out has prevented him from functioning and practicing. After Hodges won in Los Angeles, Steelers head coach Mike Tomlin was asked point-blank if there would be a change in who was the No. 1 quarterback, to which he responded,

“(Rudolph) is our quarterback when he clears the protocol. It’s as simple as that. Appreciate the efforts of Duck [Hodges] and so forth, but as soon as he is ready to go, he is ready to go.”

It’s understandable that Steelers fans are hoping to ride the momentum that seemed to come from Hodges and the win over the Chargers. Rudolph did win a game, too, you know? Or did we all forget because it was the Cincinnati Bengals? And without pasting in another table that compares stats between Rudolph and Hodges, it’s easier to just point out that everyone was on the Rudolph bandwagon until the injury.

So, let’s put the non-existent quarterback controversy to bed. It was created partly due to fans who are grasping for hope and things that make them feel good about the Steelers in a tough year and fostered by those in the varying media that could capitalize on fans clicking on a feed to emote and thus generate a few pennies of income (by those media sites). The Steelers are actually in a very good place without a need for any controversy by being smart and hanging on to two guys in Rudolph and Hodges that can enter the game and run the offense in the absence of Roethlisberger. Continuing to light fire to an issue that does not exist is just ridiculousness.