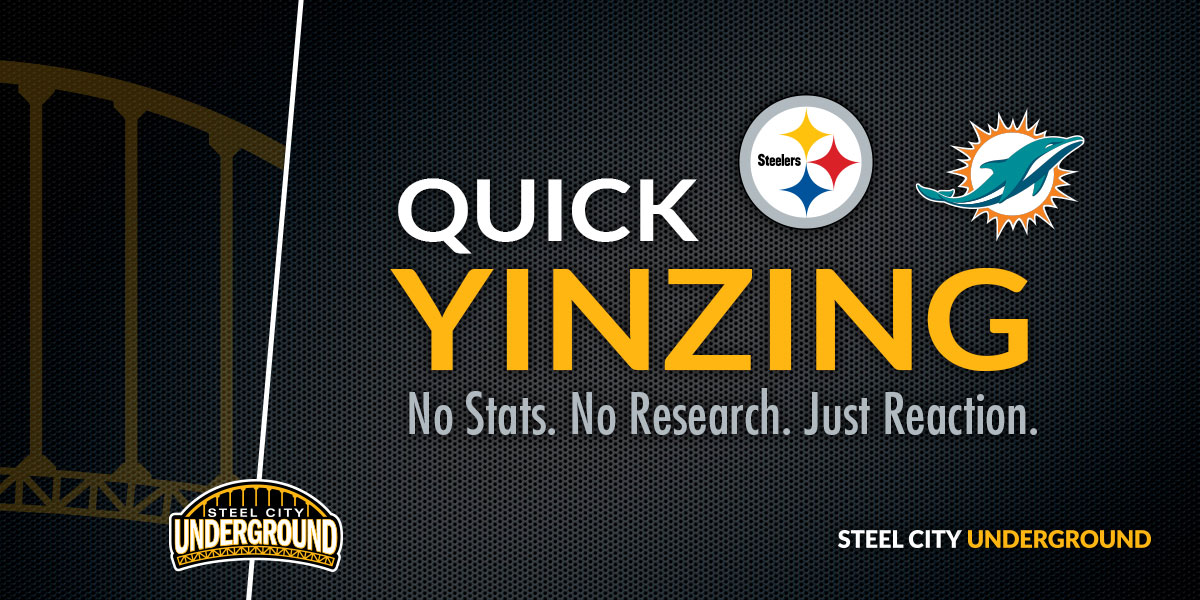 There was plenty to be concerned about when the Pittsburgh Steelers offense took the field for their first series on Monday night against the Dolphins. With the team off of the bye, it wasn’t a good start as Mason Rudolph tossed an interception and Miami took advantage. Thankfully, after being down by 14 points, a big play by Minkah Fitzpatrick was magic in giving the Steelers the momentum they needed to get back on track and score 24 unanswered points for the win, 27-14.

The Steelers earned plenty of boos from the home crowd at Heinz Field early in the game because they came out flat. Rudolph looked a little shell-shocked and unsure of himself. He wasn’t able to lead his receivers and that led to balls that weren’t catchable. It was clear that Rudolph was frustrated and that Randy Fichtner was trying to stay true to his pre-game statements about pushing the ball down the field.

When Fitzpatrick grabbed the first of two interceptions over his former team, however, it seemed to inject more confidence in both the offense and the defense. Running back James Conner and receivers JuJu Smith-Schuster and Diontae Johnson both had big games, with Conner gaining nearly 150 yards on the ground.

T.J. Watt and the Steelers defense then dialed up some great plays. Watt grabbed a strip-sack of Ryan Fitzpatrick and added a sack that essentially ended the game so that the offense could simply go out for a victory formation snap. Watt was given plenty of support up front from Cameron Heyward and Bud Dupree while the Steelers’ defensive backfield played solid coverage and Mike Hilton was able to force a critical fumble (on Mark Walton) that Steven Nelson was able to recover with just over nine minutes left in the final quarter.

In previous years, the Steelers have seen marquee players be their primary playmakers. This season, Pittsburgh is getting plays from a variety of players – finding their identity and rallying in the face of adversity. The offensive line struggled early only to dig deep and provide better run lanes for Conner and give Rudolph more time in the pocket. The defense went from being on their heels to making significant plays and continuing to grab takeaways.

This was another win that wasn’t pretty but it was a win that the Steelers needed. And in the NFL, a team that bends but doesn’t break and can rally usually finds a way to start stacking wins. Pittsburgh can take a big breath after a huge rally but will need to grab ahold of that energy and build on it as they look ahead to their next opponent.

Notes: Conner has an AC (shoulder) injury that will be examined for a potential sprain. Benny Snell, Jr. and Ramon Foster both left the game due to injury and will be evaluated per head coach Mike Tomlin.