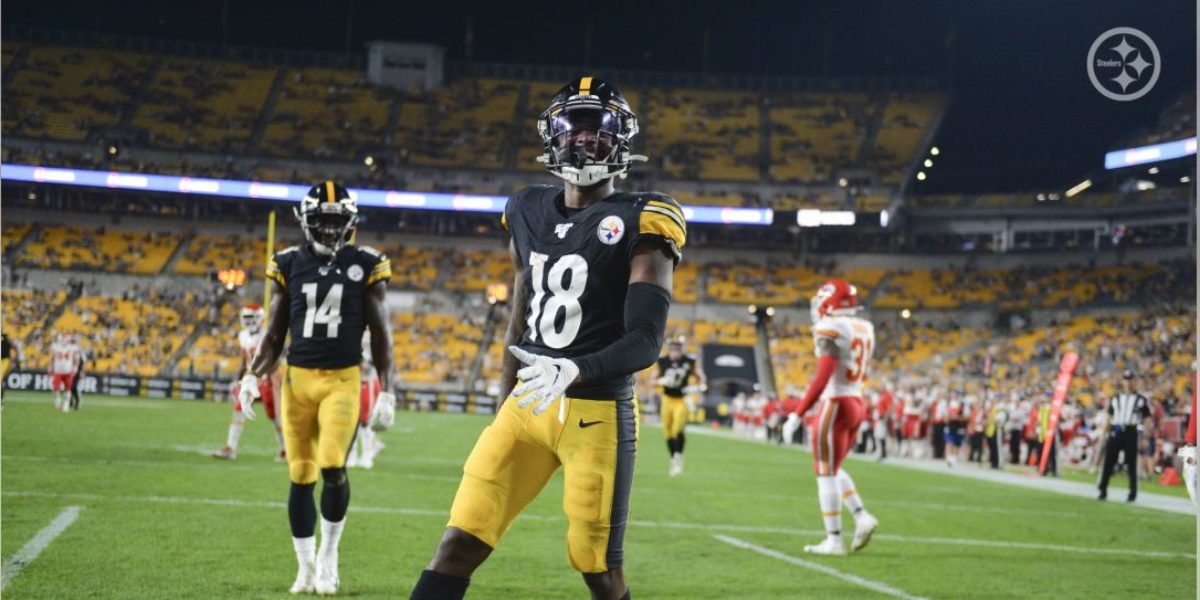 The second week of the Steelers preseason was instantly met with less enthusiasm than the first, as somber news struck Steelers Nation with the passing of wide receivers coach Darryl Drake two days following their first exhibition game.

Many players from around the league were close with Coach Drake, who preached to “Shut out the noise”, a quote which would become the team’s mantra through the 2019 season. The Steelers would also honor Drake throughout the week, announcing special “DD” decals which would be worn on their helmets during the upcoming season.

As for the game itself, the show must go on and onlookers were wondering where the Steelers stood with their backup quarterback battle between Mason Rudolph and Joshua Dobbs. Dobbs, who started in the first week of the preseason watched from the sidelines as Rudolph got the nod in week two.

Rudolph would also get a limited number of snaps with other starters such as JuJu Smith-Schuster and James Conner, who played sparingly. Rudolph himself would operate several drives, with Dobbs finally entering the game for the Steelers next-to-last possession of the first half, with a little over a minute remaining.

Dobbs immediately hit James Washington, who once again stood out for a second straight week: this time with four catches for 78 yards, 40 of which were gained on Dobbs’ first pass of the game.

Dobbs would then struggle, completing only half of his next ten attempts, finishing the evening 6-of-11 for 95 yards with an interception. He would only successfully scramble once for five yards in the game, and his costly interception with 1st-and-Goal from the Chiefs six-yard line nearly proved the difference maker in what would be a 17-7 final. (The Steelers “won”, if that counts.)

Rudolph, on the other hand, statistically looked poor but was the victim of dropped passes and players fumbling. In what could be a foreshadowing of the season to come, free agent acquisition Donte Moncrief put the ball on the ground midway through the first quarter, in what would be a one-play Steelers drive from around midfield.

The other explosive plays in the game included a 19-yard end-around run by roster hopeful Diontae Spencer, and another receiver of his namesake, rookie Diontae Johnson, coming up with a circus catch for a late game score off of a Devlin Hodges pass.

In fact, it was this game that “Duck” first appeared to apply more heat to Dobbs’ position on the depth chart. Hodges showed some moxie, as he led the 10-play, 80-yard scoring drive on his first series, which would put the Steelers up by ten with 4:22 remaining in the game.

Defense was also the name of the game with Bud Dupree surging to Kansas City quarterbacks with two sacks, three total QB hits and a pass deflection.

In total, the Steelers defense would force four fumbles in the game, recovering all but one: perhaps another sign of things to come.

As the “dress rehearsal” game loomed on the horizon, midway through the preseason fans were pondering who would win the backup quarterback job between Mason Rudolph and Joshua Dobbs, and if there might be room on the roster for Delvin Hodges as well.

Question marks still remained with some other smaller position battles, including an AAF upstart safety by the name of Kameron Kelly, who was turning heads in training camp, as well as the previous season’s camp phenom, Ola Adeniyi, who sat out this week while nursing an injury.

Answers would be coming very soon, but for now, the Steelers would improve their preseason record to 2-0, with two upcoming road trips to close out the month of August.