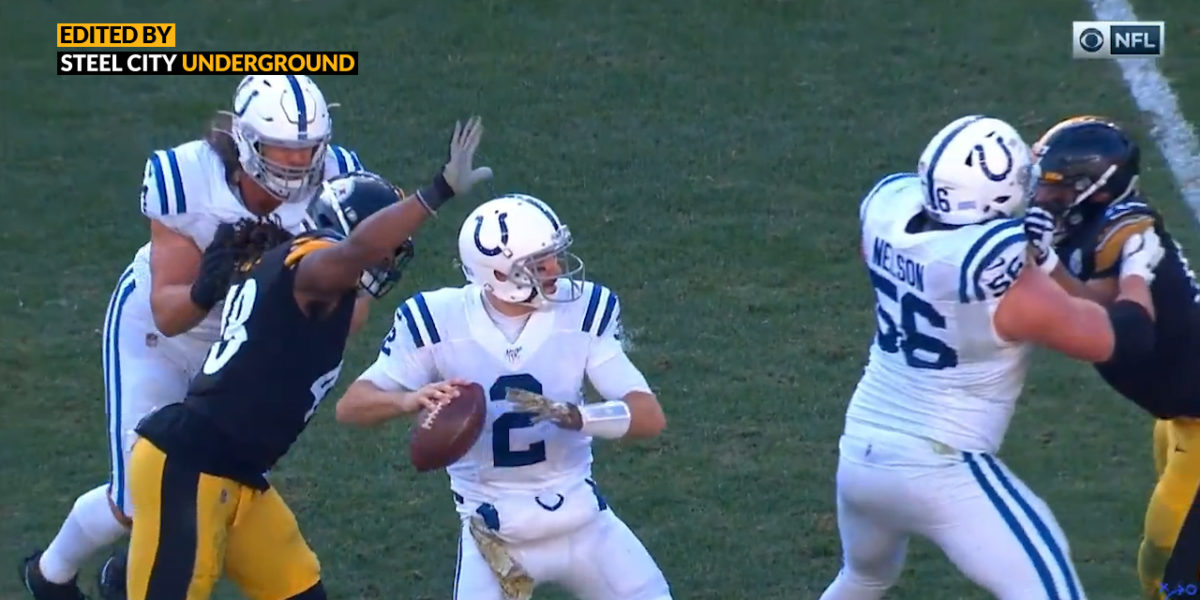 On a crisp November Sunday afternoon, the Pittsburgh Steelers were trailing the Indianapolis Colts 16-13 at halftime with the Colts receiving the ball first to start the third quarter.

Colts backup quarterback Brian Hoyer was in the game for an injured Jacoby Brissett, who was hurt earlier on. Hoyer began to move the Colts starting from the Indianapolis 35-yard line, down to the Steelers 35-yard line where they would face a 4th-and-4 situation.

The Colts, playing aggressively, dialed up a play to go for it, rather than punt with the short field.

Steelers linebacker Bud Dupree, however, had other plans!

Dupree sheds the block of Colts tackle Anthony Castonzo as Hoyer takes several steps back from receiving the shotgun snap, placing him in prime position of the Steelers edge rusher, who gets his hand on the football, wrestling it free!

Castonzo attempts to dive on the grenade but in a second snafu on this play, the awkwardly shaped pigskin rebounds off of his body and right back to the man who made the play initially happen: Dupree!

The turnover would give the Steelers offense their first shot with the ball in the second half and they would capitalize, driving 54 yards on 11 plays which would end in a 7-yard Mason Rudolph touchdown pass to Vance McDonald.

The Steelers would hold on to win the game in the end, with a final score of 26-24.