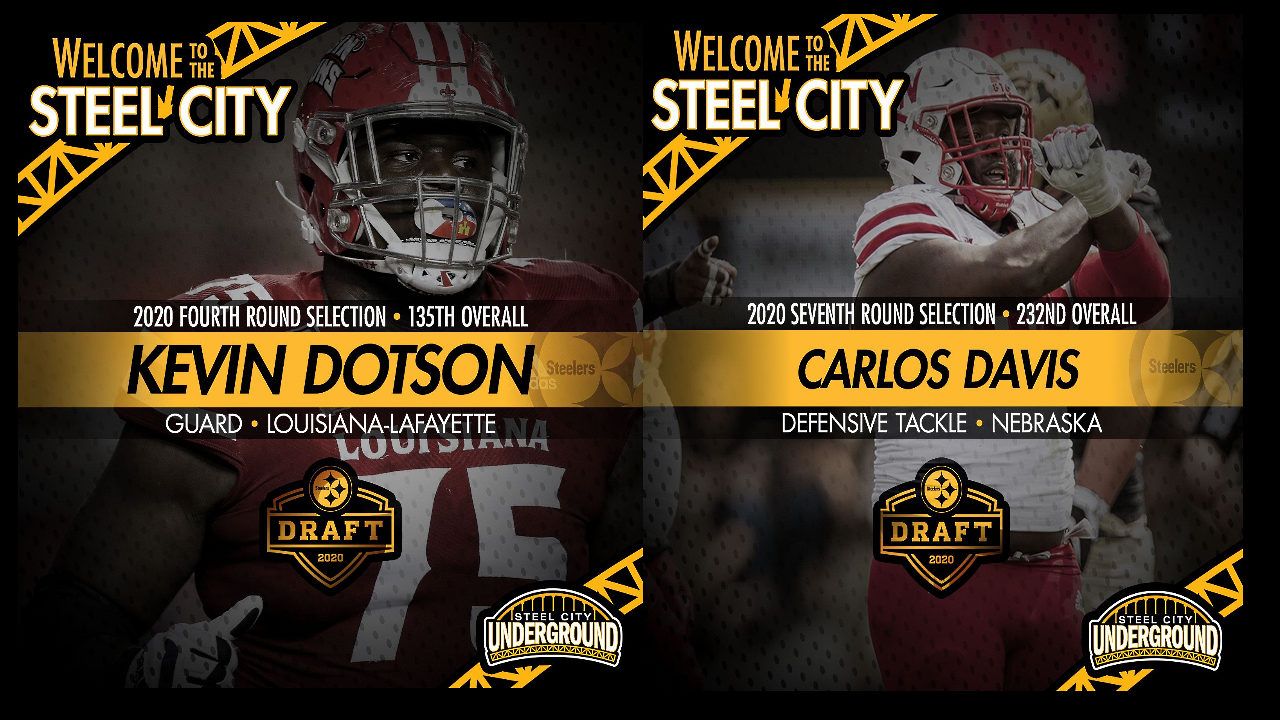 The Pittsburgh Steelers addressed depth issues on both the offensive line and defensive line with a fourth-round pick and a seventh-round selection during the 2020 NFL Draft. Both lines saw players that left, including Javon Hargrave, B.J. Finney. Long-time veteran Ramon Foster also retired. Shoring up the trenches, so to speak, was a priority for the future even if it wasn’t a must-do situation for Pittsburgh in this year’s draft.

Kevin Dotson had a childhood dream come true when the Steelers called his name. A self-proclaimed lifelong fan whose entire family loves the team, the 6-foot-4, 310-pound offensive guard from Louisiana-Lafayette could hardly contain himself after idolizing Jerome Bettis and imagining what it’d be like to protect Ben Roethlisberger.

“They’ve always been my number one team, I’ve followed them since I was about five, Dotson told Noah Strackbein of Sports Illustrated. “Even in my house, we have a big old man cave… all my passwords used to have 36 in them… so now that this is happening, it’s ridiculous.”

Dotson didn’t get an invite to the Pro Scouting Combine this year but he didn’t let it stop him from putting together some great pro day film ahead of the 2020 NFL Draft to open potential pro team scout’s eyes. That he was able to run a 4.80 second 40-yard dash time and has shown extreme strength via social media videos came as a bit of a surprise to many.

Steelers offensive line coach Shaun Sarrett is encouraged by the level of excitement and enthusiasm Dotson has expressed to the team. “I’m happy for him, he gets to play for his lifelong team that he’s loved and grew up watching.”

“His ability to compete for playing time will be etched out as we get to know him and so forth,” coach Mike Tomlin said following Dotson’s selection. “We like his pedigree. We think he has the type of talent that will allow him to (compete immediately), but he’ll write that story with how he performs.”

The Steelers now have an opportunity, after signing veteran Stefan Wisniewski, to allow Matt Feiler, Chukwuma Okorafor, Zach Banner, Maurkice Pouncey, David DeCastro, and Alejandro Villanueva help Dotson grow and gel with their group. The Steelers have already indicated that depth is a positive thing and that no matter how things progress, they’ll put the best five guys on the line to start each game in 2020. Dotson won’t be asked to play anything but the guard position, per Tomlin, and his level of enthusiasm should help him acclimate to the system in a positive manner.

Carlos Davis sat with his twin brother, Khalil, and their family, on Saturday waiting to hear their names called by NFL teams. After Khalil was taken by the Tampa Bay Buccaneers, Carlos found out that he would join the Steelers as the No. 232 pick. Carlos ended his career as a Nebraska Cornhusker as an eight-time letter winner in both football and track. Having a twin brother to push him (both have openly admitted they are highly competitive) helped Davis to get his game to the next level and earn All-American honors.

By also competing as a weight-thrower in track and field, Davis utilized his agility and flexibility to also gain speed and burst. While his brother ran the fastest 40-yard dash time among all defensive tackles at the Pro Scouting Combine, Carlos ran the third-fastest at 6-foot-2 inches and 320 pounds. The duo also had top performances in the bench press.

Carlos Davis is headed to the Steel CIty.

Davis is considered by many to be a player that the Steelers can groom. Pittsburgh has Tyson Alualu that they used a lot in the middle of their defensive line to rest Hargrave. The team also had Daniel McCullers and recent XFL-addition Cavon Walker that can push Davis for a role.

“We did videos with both (Carlos and Kahlil) during the setup,” Kevin Colbert said during a Zoom video conference with the media following the draft. “It was entertaining, to say the least. Very smart young men. (Carlos) went to the combine and ran a 4.79 in a 300-plus body. For him, there’s definite upside. We hope to continue to see how he develops.”

“(Carlos is) a strong kid, a talented athlete,” Mike Tomlin said. The Steelers’ head coach agreed that how those skills translate in how Davis does with the team will “be determined on the field, as they should.”