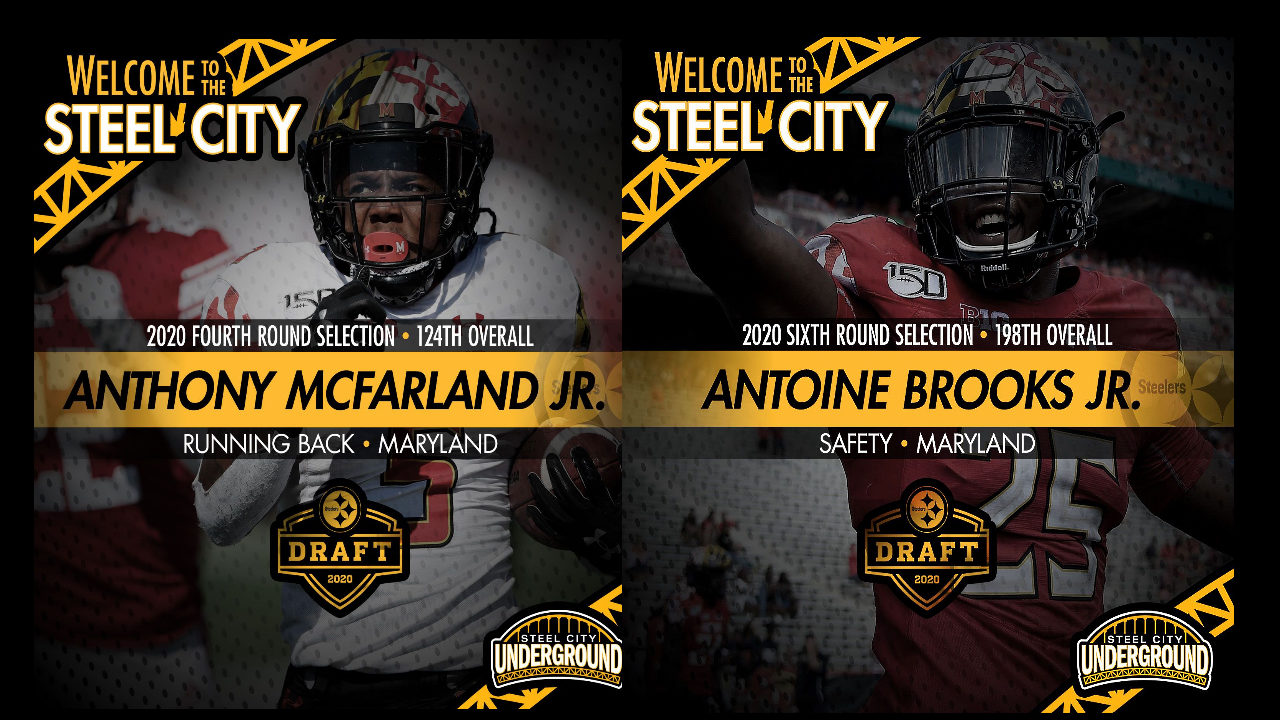 The Pittsburgh Steelers must have liked what they saw when they attended the Pro Scouting Combine in March and on tape in two Maryland Terrapins prospects. Head coach Mike Tomlin may have even gotten some inside information from his son, Dino, who is a wide receiver at Maryland. On Saturday, the third day of the 2020 NFL Draft, the Steelers added running back Anthony McFarland, Jr. (fourth round), and safety Antoine Brooks, Jr. (sixth round), to their latest draft class.

Steelers fans had been expressing concern over the trio of running backs Pittsburgh utilized last season, namely James Conner, Benny Snell, and Jaylen Samuels. Despite the run game being hampered by changes at quarterback when Ben Roethlisberger was injured for the season and the team had to ask Mason Rudolph and Devlin Hodges to rotate in and out of the starting lineup, forcing the offensive line to make adjustments as well, fans felt Conner was too injury-prone and didn’t take care of the ball well enough. Before the Draft, the Steelers had expressed confidence in their running back corps but would not rule out looking at prospects they felt might help the team in 2020. Fans – and hopefully the Steelers – got what they wanted when Pittsburgh drafted McFarland at No. 124 overall.

McFarland was a top recruit out of DeMatha Catholic when he joined the team at Maryland. In 2017, McFarland redshirted his season. As a redshirt freshman in 2018, the speedy rusher broke Maryland’s rushing record with 1,034 yards (7.9 yards-per-carry) and four touchdowns; he became just the second player in school history to have back-to-back 200-yard rushing games (210 at Indiana, 298 versus Ohio State). and also set the Maryland record for most rushing yards in a game by a freshman. He continued to earn honors that season and ranked sixth in FBS in yards-per-carry.

Despite dealing with a high-ankle sprain, McFarland’s sophomore season was still impressive; he appeared in 11-of-12 games (seven starts) and proved efficient in the ground game (614 yards and eight touchdowns) as well as receiving (17 receptions for 126 yards and a touchdown). He finished his career ranked third in school history in average yards-per-carry at 6.7, ninth in school history with six 100-yard rushing games.

At five-foot-eight, 208 pounds, McFarland posted a 4.44 second, 40-yard dash time; his performance was fourth among all other running backs at the combine (behind Jonathan Taylor at 4.39 seconds, Darrynton Evans at 4.41, and Raymond Calais at 4.42).

Although the Steelers are set at the safety position with Minkah Fitzpatrick and Terrell Edmunds, adding depth at the position was a concern entering the draft. Brooks, a quarterback at DuVal (Lanham, Md.) sustained a compound ankle fracture and a broken wrist, nearly determined to give up on football before going to Maryland, where he converted to defense.

After making the switch to linebacker, Maryland asked him to convert to the safety position before his sophomore season. It was a good move, as Brooks developed into a second-team all-Big Ten selection his junior year with 68 tackles (9.5 for a loss, team-high). His senior season, Brooks led all Terps defensive players with 87 tackles (69 solo), 8.5 tackles for a loss, and five pass breakups.

We know @steelers fans want to know what kind of player they just got in Antoine Brooks (@TwanDoee).

Although Brooks didn’t have the greatest combine performance, Steelers senior defensive assistant and secondary coach Teryl Austin was impressed with his game performances. “The biggest thing I liked about him was he was around the ball,” said Austin. “When you watch him, he has a very good feel for the game in terms of instincts and making quick decisions, and not being afraid to make a decision.”

Brooks will get an opportunity to compete with Jordan Dangerfield and Marcus Allen in camp. There’s a possibility that Brooks could fill a hybrid linebacker role but Austin made it clear that the team will take a wait-and-see approach before determining which of their players fit the positions they want to be filled. “We’ll get them in our jar, shake ’em up, and see where they fit best,” Austin told the media.