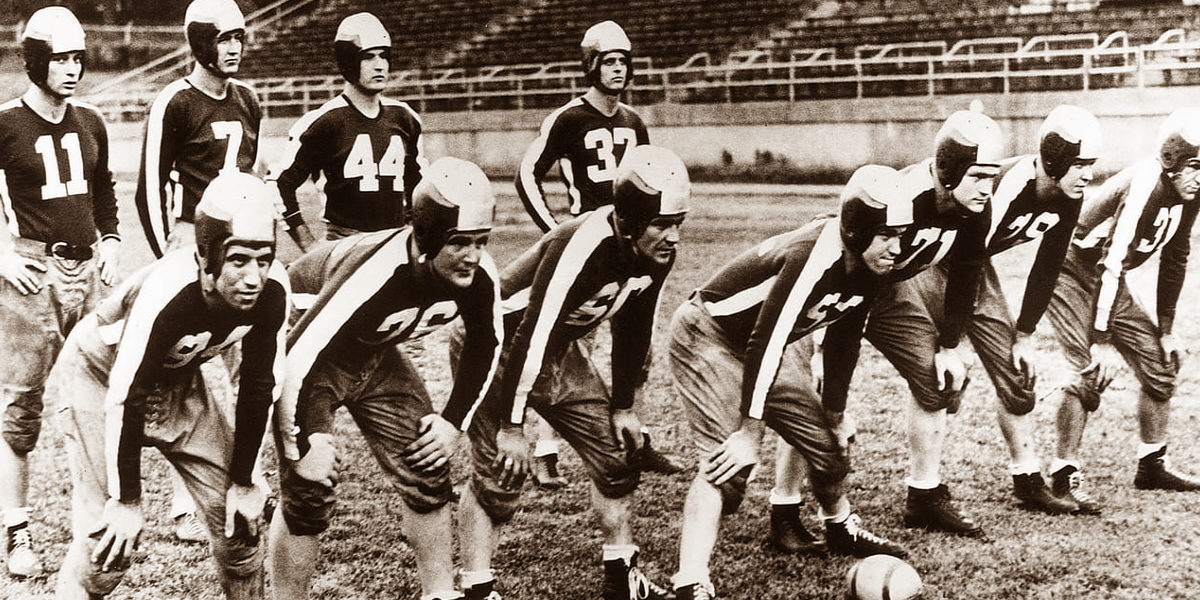 Similar to our throwback to this time of year, 76 years ago, to look at the Card-Pitt football team merger, this week we’re going back 77 years to when the ‘Steagles’ were formed.

On June 19th, 1943, the annual NFL owners’ meeting occurred. One of the biggest discussions during this meeting was how to supplement the 600 NFL players who were getting drafted to serve in World War II. Teams like the Cleveland Rams had to suspend operations altogether, and programs like the Pittsburgh Steelers only had six players left, the Philadelphia Eagles sixteen.

For two franchises, the Steelers and Eagles, the solution was to temporarily combine and merge the two organizations to play the 1943 NFL season as one team. Steelers owner, Art Rooney, knew the league needed at least eight teams to survive the season and came up with the idea to merge the two teams.

The merger was officially approved by a vote of 5-4, with the official team name as the ‘Phil-Pitt Combine.’ The popular team name ‘Steagles’ was never officially in the NFL record books and was adopted by fans and newspapers.

With Philadelphia having most of the players on the team, that city had four home games while Pittsburgh only had two. The colors for the combined team were also green and white, marking the only full season where the Pittsburgh Steelers played in colors other than black and gold. Some older color photos depict the Steagles, at times, with gold socks versus green socks with white stripes. The “official” colors were green and white, however.

As you might expect, the Steagles faced many challenges in merging the two teams to play the 1943 NFL season. The two cities were bitter in-state rivals, where both teams always finished at the bottom of the standings.

As both head coaches did not want to be demoted by Rooney or Bert Bell, Pittsburgh head coach Walt Keisling and Philadelphia’s Greasy Neale were named co-head coaches. Both had a bit of a temper and argued with each other constantly. Each wanted to implement their own offensive style, but Neale took advantage of a travel delay on the way to Philadelphia by Keisling, adding the ‘T-formation’ before Keisling ever got to camp. Keisling would then take over as defensive coordinator and Neale as offensive coordinator, while both split head coaching duties.

“I thought Greasy was the most stubborn man I ever met until I met Kiesling. They didn’t get along at all… they spent most of the time fighting with each other. It was actually kind of funny to watch.” – Frank “Bucko” Kilroy, an Eagles tackle who played for the Steagles.

In addition, the Steagles were the only professional sports team that year where all players were required to have a full-time war job, leaving football as an extracurricular activity for nearly everyone. Bill Hewitt came out of retirement from football to play for the Steagles as the highest-paid member at $400 per game; he’d enter the Hall of Fame with a reputation for never wearing a helmet (Chicago Bears, Eagles) but was chagrined to do so due to a new helmet rule in place that 1943 season.

The Washington Redskins were convinced by the league to sell Roy Zimmerman to the Steagles for cheap since he was sitting behind Sammy Baugh as a backup. Zimmerman completed just 34 percent of his pass attempts, however, with nine touchdowns to 17 interceptions. In the end, he wound up splitting time with a left-handed Brooklyn College rookie named Allie Sherman.

“It sounds like we had a big advantage, putting two teams together as one… all it meant was we had twice as many lousy players. Look at the teams. The Eagles had never had a winning season and the Steelers were almost as bad.” – Al Wistert

Despite both teams typically having losing seasons, the 1943 Steagles got off to an impressive 2-0 start. In one game against the New York Giants, the team fumbled an NFL record ten times (that still stood until 2018), yet still won the game, 28-14. The team went into the final week of the season with a record of 5-3-1 and a shot at the division title against the Green Bay Packers. They lost the game, finishing with a record of 5-4-1, but it was the first winning season for the Philadelphia Eagles and the second for the Pittsburgh Steelers.