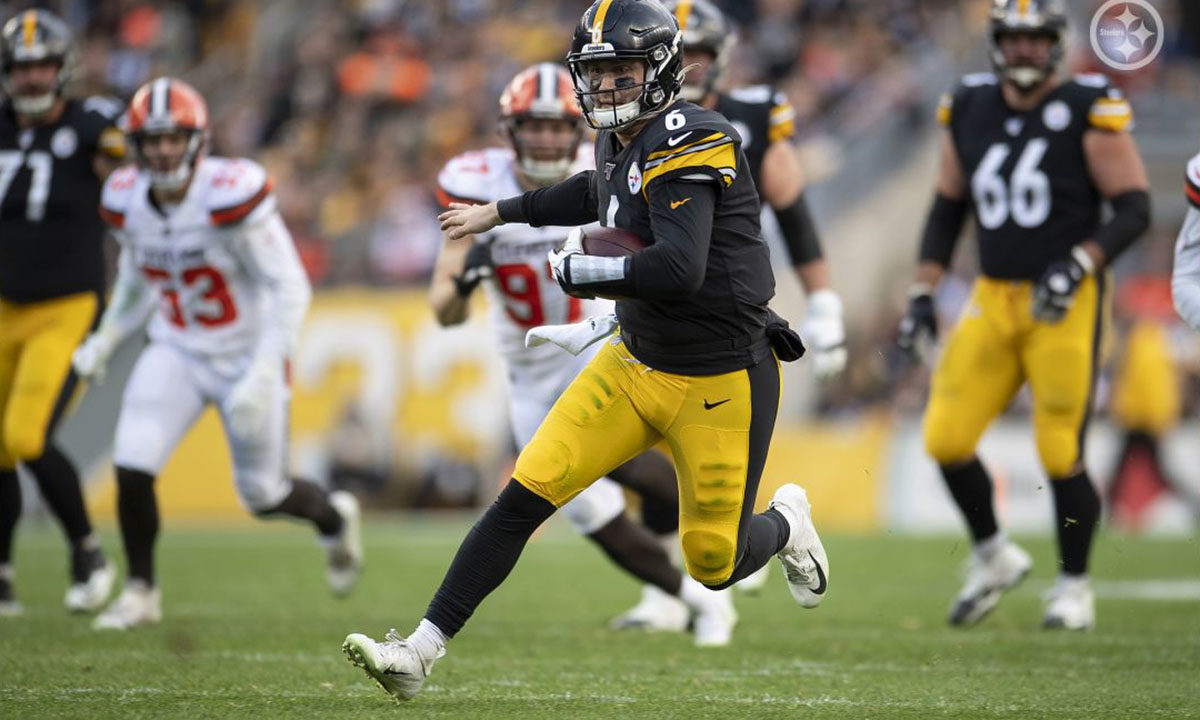 2019 Recall: Steelers do just enough to hold off Browns in rematch from TNF

That’s what the Steelers experienced heading into Week 13 for a rematch with the Cleveland Browns. The first game was fireworks on primetime Thursday Night Football, where Mason Rudolph got into an altercation with Browns DE Myles Garrett.

With Garrett and others suspended for this matchup, there were less fireworks at Heinz Field than usual. Rudolph was also a non-factor, having been benched a week earlier in Cincinnati, losing his job to Devlin “Duck” Hodges.

It wasn’t all sunshine and rainbows earlier, however, as the Browns took a 10-0 lead midway through the second quarter, but those ten points would evaporate within less than two minutes.

The Steelers were driving, down 10-0 in the second quarter, with their best offensive effort in the game thus far… and then the referees killed a play with a bogus false start call on the quarterback, where Devlin Hodges didn’t even move!

The play set the Steeler back five yards, to 2nd-and-12, and changed their play calling, stalled the drive, and ended with a 39-yard Chris Boswell field goal instead of, what could’ve been a 3rd-and-short following a Kerrith Whyte 3-yard gain.

The bogus call (in which you could visibly see Mike Tomlin mouth “BULLS***” to a sideline official) derailed the Steelers best drive of the game at that time.

Following that Chris Boswell field goal, the Steelers offense got another shot at points before halftime after the defense forced a three-and-out on the Browns.

Receiving the ball at their own 31 with 1:48 left in the second quarter, the Steelers would drive 69 yards in 5 plays, capped off by an incredible touchdown reception by James Washington, who was interfered with not once but twice on the play and still came up with the ball.

The game would be tied 10-all going into halftime with the Steelers receiving to start the second half, and feeling as if they could definitely win this game despite going down ten points early to the Browns.

Devlin Hodges would lead a 7-play, 69-yard drive which was capped off by a one-yard Benny Snell touchdown run to open the second half, putting Pittsburgh up 17-10.

The Browns would only touch the ball once in the third quarter, as a long Cleveland drive (timewise) was decimated by a Bud Dupree strip-sack.

The Steelers would secure the ball at 4:49 and play the possession game with a 10-play drive that ate up 6:01 of game clock, despite only going 35 yards. The drive would finish with a 29-yard Chris Boswell field goal, capping off 20 unanswered Pittsburgh points and giving the Steelers a 20-10 advantage.

After several back-and-forth series, the Browns would get back on the board with an Austin Seibert field goal to narrow the Steelers lead to seven… and nearly get a chance to get right back in it on the very next Steelers play where Devlin Hodges was intercepted.

The pick was returned to the Steelers 30-yard line. Whether the pick was a result of a wrong route run or miscommunication with WR Diontae Johnson is debatable, but it happened.

Mike Tomlin was somewhat chided for a comment made in his press conference leading up to the game about Duck Hodges and saying “He has not killed us.” That statement almost came back to bite the Steelers, and also put a damper on a solid performance by the undrafted rookie quarterback.

Fortunately, the Steelers defense would suffocate the Browns offense and force a 3-and-out, as well as push them out of field goal range: in other words, it didn’t end up “killing” the Steelers. (But it could have!)

The Steelers offense would play more ground and clock control ball while the defense did their job on one more Browns possession before sealing the deal with a win by a final score of Steelers 20, Browns 13.