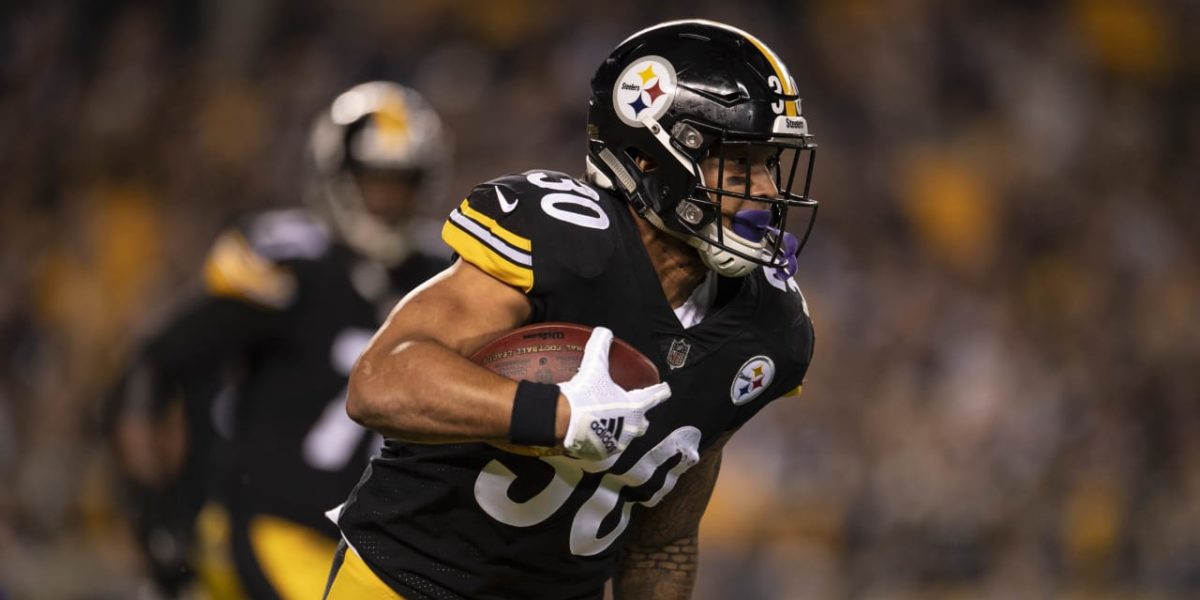 Steelers on the hot seat this season? James Conner

He was born to be a Steeler, but over the course of three seasons James Conner went from beloved, to nearly vilified.

The worst part? He hasn’t done anything wrong.

Rewinding back on James’ storybook football career, he was a standout player at Erie, Pennsylvania’s McDowell high school before going on to become one of the most popular players ever at the University of Pittsburgh.

As a sophomore he ran for 1,765 yards and 26 touchdowns, becoming the ACC Player of the Year. The following season he would tear his MCL in his first game of the season, which then uncovered Hodgkin’s Lymphoma.

Conner would overcome the injury and the cancer to return to football and eventually be drafted in the third round of the 2017 NFL Draft by the Pittsburgh Steelers.

His jersey became an overnight best-seller, despite never taking a single snap of pro football to date. He would lie in wait while the Steelers went back-and-forth on contract talks with disgruntled fellow running back Le’Veon Bell.

Conner only carried the ball 32 times his rookie season, but would become the feature back, and be selected to the Pro Bowl, in his second pro season, falling short of 1,000 yards by 27 but scoring 13 total touchdowns.

Last season the expectations for Conner grew, as Bell was officially no longer a member of the Steelers. Bell sat out all of 2018 and refused to sign his franchise tender; the Steelers allowed him to hit free agency and sign with the Jets in 2019.

It was now Conner’s show.

Unfortunately, he would be oft-injured last season and miss six full games as well as portions of others.

For all of the griping about Bell’s injuries, suspensions, and sit-outs, somehow the same fervor was transferred to Conner this offseason, placing him on a proverbial hot seat in the final year of his rookie contract.

Many fans are unforgiving of Conner’s inability to stay healthy, something that can hardly be attributed to his fault. Unlike his predecessor, Conner has a squeaky-clean reputation both on and off of the field. There are no failed drug tests or incidents of drug possession here with Conner. No rap songs taking pot shots at his team or contract demands. And no social media antics with jet skis and partying while his peers are sweating at Saint Vincent College during training camp.

Instead we see Conner buying his father a new truck, his mother a new house, and building his back into Hulk-like proportions.

Yet, many are calling for his job when he has another year to prove he can still be the “man” in Pittsburgh.

The shame here is how quickly fans turned on the very player they once praised for being “Conner Strong” for making a comeback from his knee injury and cancer simultaneously. While Conner experienced an injury late in his 2017 rookie season as well, he was hardly the feature back.

He did miss three games in 2018 also, which has led to the perception that he’s “made of glass” as some might say.

However, Bell once had the same labels placed on him.

Le’Veon missed the first three games of his rookie season. He would play all 16 games of his second year before getting hurt in the season finale and being placed on IR before the playoffs.

Bell would miss games due to suspensions and injuries again in 2015 and 2016, before a final push in his first franchise tag season where he logged a career-high 321 carries. (But not before sitting out training camp and looking sluggish in the first few weeks of his return during the regular season.)

Need I remind fans of calls to “pay the man” following all of that turmoil?

By comparison Conner deserves a pass for 2020. He’s under a team-friendly rookie contract and has every reason to prove he’s a full-time player who deserves a second NFL contract. Conner has gone on the record stating he would like to remain with the Steelers for the future and appears to be willing to do whatever it takes to make that happen.

The question is whether or not his body will cooperate with him.

In the final year of his rookie deal the Steelers may take a wait and see approach before placing a contract in front of him to sign.

For that reason, Conner is on this year’s “hot seat”.