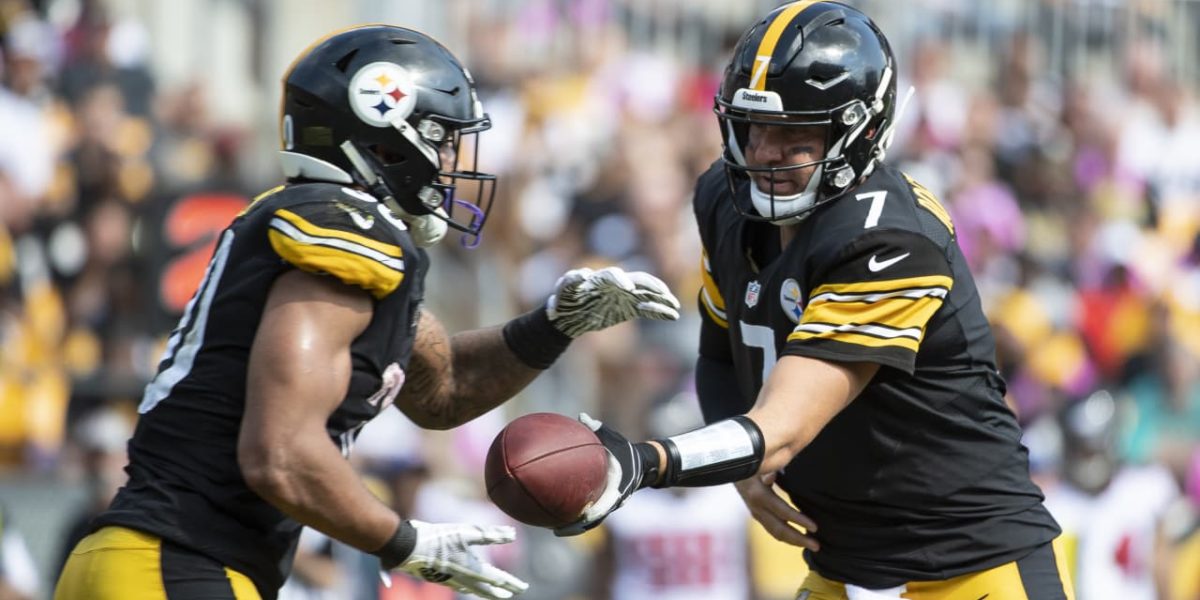 Which Steelers are early targets for your fantasy football team?

Another day… another dollar… or it could be!

As teams return to training camp the wheels are already turning on fantasy football mock drafts and players everyone should target for their own team.

Of course, being a Steelers fan makes it difficult to separate your bias from your picks: that is, I’ve never truly “wanted” Tom Brady on my squad, but is Ben Roethlisberger a realistic fantasy option instead?

Despite an 8-8 season in 2019, the Steelers have some excellent year-long and NFL DFS projections. I will take a look at some of the starters below, by positions typically drafted, and give my opinion on whether or not you should reach for them in your fantasy draft.

More than likely you’re not drafting more than one quarterback, even if you believe in taking one early in your draft, it probably won’t be Big Ben.

I’ve had a love/hate relationship with the future Hall of Famer from a fantasy perspective. Over the years, Ben has put up solid season stats, but they don’t usually translate into individual performances that matchup well against your weekly opponents.

There’s also concern over whether or not Ben returns to form after sitting out most of 2019 with an elbow injury. From all appearances, he looks sharp in training videos and is as slim as ever in photos taken when reporting to training camp on Tuesday.

My suggestion is that Ben is draftable as a backup or a spot starter: you only want him as your main option in deep leagues (such as a 16-team league I’m in). Otherwise, he’s someone that will likely be available on the waiver wire throughout the season, provided you’re not in a league with a lot of bench spots.

As for DFS (Daily Fantasy Football), Roethlisberger is a great week-to-week pick based on matchup. He’ll likely remain affordable and could have one of those big games that makes your team money.

A great fantasy option who rose when many people were selecting Le’Veon Bell in their top three back in 2018, Conner was largely unreliable last season and also left some players hanging with missed games in that 2018 campaign.

Few teams use a “bell cow” running back, so picking Conner can be enticing, if he continues to get the lion’s share of reps in the Steelers offense – and there’s no reason to think he won’t.

But keep the risk factor in mind when and where you select him in your drafts.

As for DFS, it’s a lot easier to see if Conner fits into your plans as you won’t be hitched to him all season.

JuJu Smith-Schuster figures to be the biggest beneficiary of Big Ben’s return. He will likely be looked over from last year’s numbers but could still be a bonafide WR1 in most leagues.

The other receivers tend to differ depending on the depth of your league. I would rank Diontae Johnson as a sleeper, but would pass on others such as James Washington or Chase Claypool at this point, as there may not be enough targets to go around for more than two receivers – and generally, even when the Steelers had several big-name targets on the same team, no more than one of those players put up over 1,000 yards receiving and 8-10 touchdowns.

Eric Ebron is the shiny new toy in the Steelers offense, but is another buyer beware: not only due to the reasons mentioned for the receivers above (lack of targets/production) but also due to his counterpart, Vance McDonald, possibly benefitting from Ebron’s presence as well.

This is a great problem for the Steelers offense, which needs weapons, but it may not bode well for your fantasy football team if you take Ebron or McDonald for 30-40 catches and 3-4 touchdowns each as your ceiling.

There will be other tight ends with higher upside and each of these good Steelers will have an impact on the team, and perhaps do damage on a weekly DFS level, but they’re most likely spot starters at best for your yearly league.

If you believe the Steelers offense will do great things this season, then draft Boswell.

In fact, he could be the most surefire fantasy option Pittsburgh has other than…

Unfortunately for Steelers fans who like to keep their team close to their vest with their fantasy roster, the defense will no longer be overlooked in fantasy drafts.

The Steelers have led (or tied for the lead) in defensive sacks in each of the last three years. They had two All-Pro, Defensive MVP candidates in T.J. Watt and Minkah Fitzpatrick, plus a breakout year from Bud Dupree and continue to see great things from the rest of their defense.

In short, the Steelers may have one of the best units in the NFL, especially against what appears to be a weak 2020 schedule.

However, don’t let that be a reason to overdraft them either.