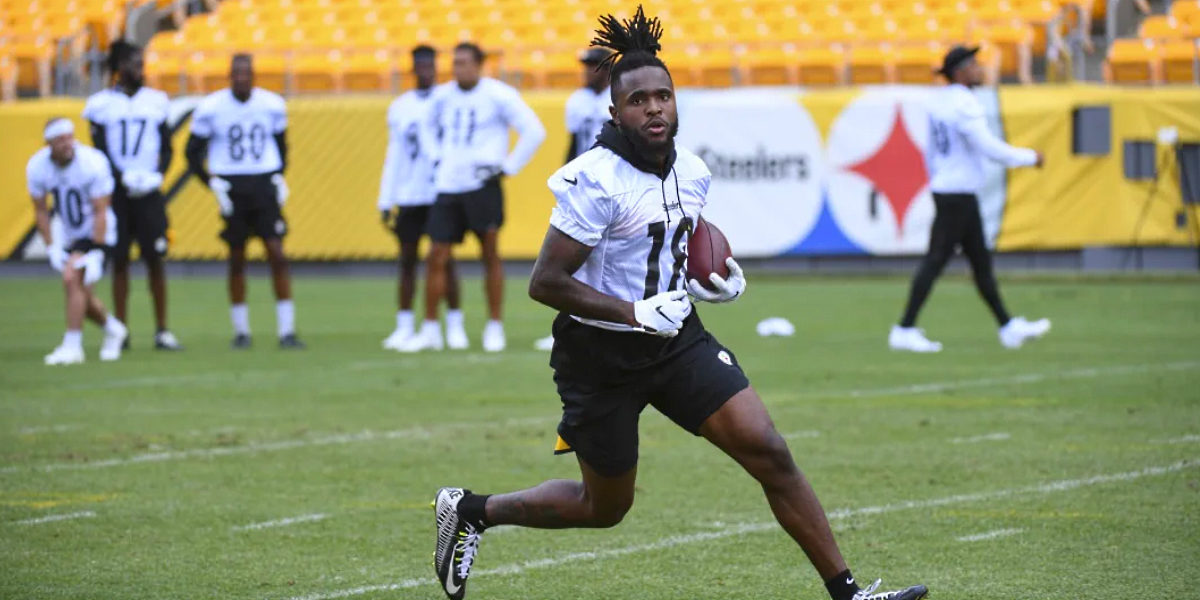 Training camp is underway for the Pittsburgh Steelers, even if it isn’t the typical camp that fans are used to. With the opening of camp during the COVID-19 pandemic, Mike Tomlin and the organization chose to bring former NFL receiver Ike Hillard, who’d spent the past six seasons with Washington’s organization as the receivers coach, to replace Ray Sherman who had come out of retirement following the passing of Darryl Drake in 2019.

The wide receiver corps was an area, last season, that saw some of the worst adversity during a season that had real potential until Ben Roethlisberger‘s season-ending injury. Dealing with the personal tragedy of losing their coach (Drake) during training camp, the receiving group also had to deal with injuries and the merry-go-round between Mason Rudolph and Devlin Hodges at quarterback.

Looking back at the 2019 season

Only two receivers played a full season (16 games); rookie Diontae Johnson and Johnny Holton. While Holton, who is no longer with the Steelers, only saw three starts, Johnson broke out with a surprisingly effective and electric first year in the NFL. Johnson finished the season with 59 receptions (ranked second in franchise history among rookies, led all rookies for the season) for 680 yards and five touchdown catches; on special teams, Johnson set a record for the longest punt return for a touchdown in franchise history with an 85-yard return.

JuJu Smith-Schuster struggled in 2019. While he played in 12 games (12 starts), injury kept the young receiver from having a breakout third season with the Steelers. Targeted 70 times, Smith-Schuster caught 42 passes (to five drops) for 552 yards and three touchdowns. Where Smith-Schuster shined was in yards after-the-catch with 229.

James Washington, who is currently on the reserve/COVID-19 list, saw action in 15 games last season. He finished 2019 as the Steelers’ top receiver in yards with 735. Washington also finished with the best yards-per-game average at 49.0.

Things weren’t ideal but the receivers made the most out of what would be a difficult season for the entire Steelers offense. “It was a rollercoaster for sure from the get-go,” Washington told Teresa Varley of Steelers.com. “Keeping Coach Drake in our minds helped us keep that faith and maintain a competitive attitude all last season.”

There are some new faces on the Steelers’ roster at wide receiver. As training camp continues, it should be interesting to see which players break out of the pack. The current roster is as follows:

Hilliard expects zero excuses when it comes to having the receivers ready to play in 2020. “These kids are extremely talented, it’s just our job to get the most out of them,” Hilliard said during a Zoom conference on Monday. “We’re not gonna make excuses about how much time we missed… We have to now make sure that when we do get real snaps we maximize those and we get the most out of those players on a snap-by-snap basis.”

One of the areas Hilliard expressed a focus in is understanding timing and spacing on the field while appreciating the evolution of roles in-game and being able to not only get open but to bring in and secure the ball.

Smith-Schuster and Switzer have the most NFL experience. That will be something that will be important as the receiving corps come together, learns to trust each other, and improve under Hilliard’s tutelage. “At the end of the day it’s our job as players and coaches to perform,” Hilliard said. “We all know JuJu’s a playmaker. We all know he’s going to be a guy that we want to get the ball to to jump-start our offense in a big way.”

On the opposite end of the experience spectrum is Claypool. The tall, speedy receiver is expected to be a key project player – not unlike Terry McLaurin was for Hilliard in Washington last season. “You get a chance to harness that kind of talent and kind of shape it and mold it into something that can be really special,” Hilliard said about the young receiver out of Notre Dame, “I think as an organization we all jump at that.”

With a healthy ‘Big Ben’ under center and an experienced coach to pick them up and get them back in the right frame of mind and healthy, the Steelers’ receiving corps looks to bounce back big in 2020. Production should get a jump as well. Overall, the Steelers will continue to mold a young crew by building off of past success. Training camp will be a litmus test to see who picks up Hilliard’s coaching philosophy and gels in the offense. This is a young group that appears to be on a course for a big upcoming NFL season.