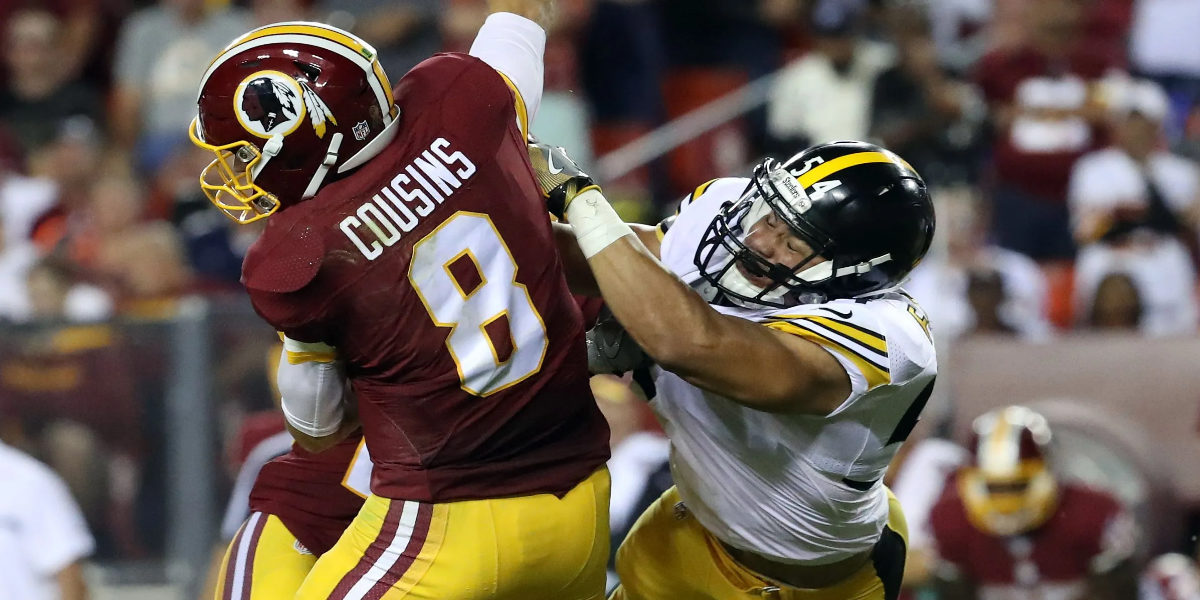 With the start of the 2020 NFL regular season coming up on Monday Night Football on Sept. 14, between the Pittsburgh Steelers and the New York Giants, we thought it’d be fun to go back and look at the four best season openers the black and gold have put into the history books since 2000.

The Steelers entered the game with two key receivers unavailable (Martavis Bryant and Markus Wheaton) as well as their workhorse running back Le’Veon Bell. Ben Roethlisberger, in his first season following Heath Miller‘s retirement, took the leadership role on his shoulders and trusted in a largely untested offense to get the season off to a good start with a win. Facing the then Washington Redskins on Monday Night Football, after pumping up his teammates, Roethlisberger would not only recover a crucial fumble but completed 27-of-37 passes for 300 yards and three touchdowns as the Steelers grabbed the win, 38-16.

“We had ‘7″. And when you got ‘7’ you got the chance to put together performances like that.” – Head coach Mike Tomlin

In place of Bell, DeAngelo Williams became a machine on the ground, running for 143 yards and two touchdowns on 26 carries. Meanwhile, Eli Rogers grabbed his first career touchdown pass in his NFL debut; a pass that hit receiver Sammie Coates and Rogers’ facemask before he secured the ball.

On defense, Ryan Shazier was key in the game when he picked off a Kirk Cousins pass that set up a touchdown pass in the third quarter.

This was a game that probably haunted Texans coach Gary Kubiak and Houston fans after he gambled on short-yardage play that the Steelers stuffed. It set up a runaway game for Willie Parker and the Steelers in a 38-17 victory that was all but over by the end of the first half of the game. It was the Steelers’ sixth consecutive season opener win at the time and was the NFL’s longest win streak in season openers since the Miami Dolphins had won 11 in a row (1992-2002). Parker, who was returning from a serious leg injury the year before running for three touchdowns (a career high).

“People were wondering… how he was going to come back from a leg injury like that. It was fun to watch Willie Parker be Willie Parker.” – Ben Roethlisberger

The Steelers had been all about big, physical backs, but in their 2005 season opener, it was Willie Parker who was asked to step up in place of injured Jerome Bettis and Duce Staley. In Roethlisberger’s sophomore season, the Steelers scored on their first six possessions of their season opener, scoring four touchdowns and two field goals. It wasn’t a high passing game with ‘Big Ben’ completing just nine-of-14 passes but he made every one of them count. The Steelers routed the Titans, 34-7.

On September 9, 2007, in Mike Tomlin’s first game as the head coach of the Steelers, the team was able to capitalize on a lack of discipline by the Browns. In the Browns’ first offensive position, the Steelers forced a punt. As Paul Ernster was ready to give the ball to the Steelers, Cleveland drew four penalties on the single play: two holding calls, an illegal formation, and an illegal man downfield. Talk about a yellow laundry fest. The net result was a 15-yard punt after Ernster then mishandled the snap after the penalties were declined.

The Steelers went into the locker room at halftime with a 17-0 lead after a 40-yard touchdown pass from Ben Roethlisberger to Santonio Holmes. Hines Ward, Heath Miller, and Matt Spaeth would all grab touchdown passes as well that day.

On defense, the Steelers held a 5:1 turnover ratio versus their AFC North rivals. Ike Taylor and Deshea Townsend both came away with interceptions with both Derek Anderson and Charlie Frye playing quarterback for the Browns (they each threw one pick).

The Browns’ leading rusher, Jamal Lewis, was held to just 11 carries for 35 yards in large part due to the intense pressure the Steelers defense was placing on both Anderson and Frye.

In a disaster for the Browns, the Steelers walked away with a 34-7 win.