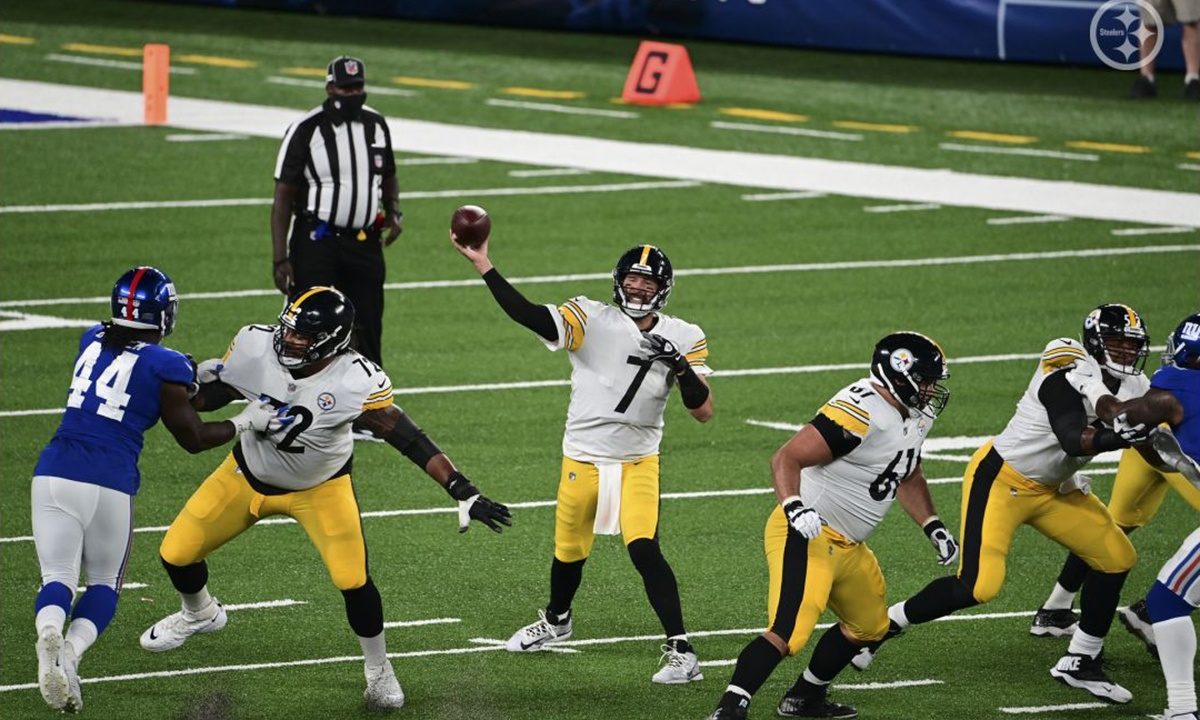 The much-anticipated return of Ben Roethlisberger against the New York Giants on Monday Night Football ended in a Pittsburgh Steelers victory to open the 2020 NFL regular season and the chase for Lombardi number seven has officially begun.

Despite not seeing game action in a full calendar year, Roethlisberger looked good, throwing for 229 yards and three touchdowns. The most important part about Roethlisberger’s return was the fluidity of the offense as he sliced and diced the Giants defense in a two-minute drill that was nearly flawless.

Big Ben is capable of spreading the ball to all of his receivers and I believe that is something this offense will need to continue to do as the season progresses. Eight different guys caught the ball on Monday night and it was evident that JuJu Smith-Schuster was rejuvenated as Roethlisberger was able to get him the ball six times, including two touchdowns.

The return of Roethlisberger wasn’t the only exciting thing fans of the Steelers got to watch against New York; the defense was once again stifling and rabid. They held Saquon Barkley, one of the premier backs in football to a pitiful six yards on fifteen carries. They forced two interceptions and had eleven tackles behind the line of scrimmage. Bud Dupree was stellar and proved he deserved the franchise tag this year and plans to be paid this coming offseason.

As the team prepares for their home opener against the 0-1 Denver Broncos, they’re immediately going to have to figure out who will be playing on the offensive line in place of Zach Banner who appears significantly injured as well Stefen Wisniewski who went down with an injury and was already playing in place of the injured David DeCastro. In all likelihood, Chuks Okarofor can step in and play for Banner but I look for some free agent o-lineman to be in Pittsburgh this week as well; the line already looks depleted one game into the season.

Against the Broncos, Benny Snell needs to be the main back. James Conner was injured once again and even if he were healthy, I’d be pushing for Snell to be the guy. He runs the ball more effectively than Conner, finds the holes quicker, and has a burst of speed that Conner seems to lack. Snell should see the ball 25 times against the Broncos this coming week and I’d expect him to average at least four yards-per-carry.

Roethlisberger will need to continue getting all his receivers involved in the game and I’d like to see more production out of Eric Ebron moving forward. I think Ebron will be a key to the success of the Steelers when they play Denver this coming week. Pittsburgh needs to spread the Broncos defense wide by pushing out four receivers; Smith-Schuster, Diontae Johnson, James Washington, and Chase Claypool, freeing up the middle for Eric Ebron and possibly Jaylen Samuels or Anthony McFarland out of the backfield on third down plays. In doing so, this offense will score points in droves.

Defensively, the Steelers face another dynamic running back, Melvin Gordon, who they will need to stop first. The Broncos want to feed Gordon the ball, protecting their young quarterback Drew Lock and if the Steelers can stuff Gordon as they did Barkley, Lock is going to have to be the guy to beat them. The Steelers did show they are capable of giving up passing yards and have some weaknesses on third-down defense at times so they will need to blitz Lock with fury and expect to see TJ Watt and Bud Dupree in the Broncos backfield all afternoon.

The Broncos are a younger team at their skill positions and can easily be rattled, however with a lack of a home crowd in the stadium, the Steelers will have to rattle them and intimidate them on their own, flustering the 0-1 Denver team into mistakes and ideally putting the game away early.

If the Steelers can overcome the injuries on the offensive line, keep Big Ben upright and healthy, run the ball with an average of four yards a carry, and stuff Melvin Gordon, they should win this game in a cakewalk.