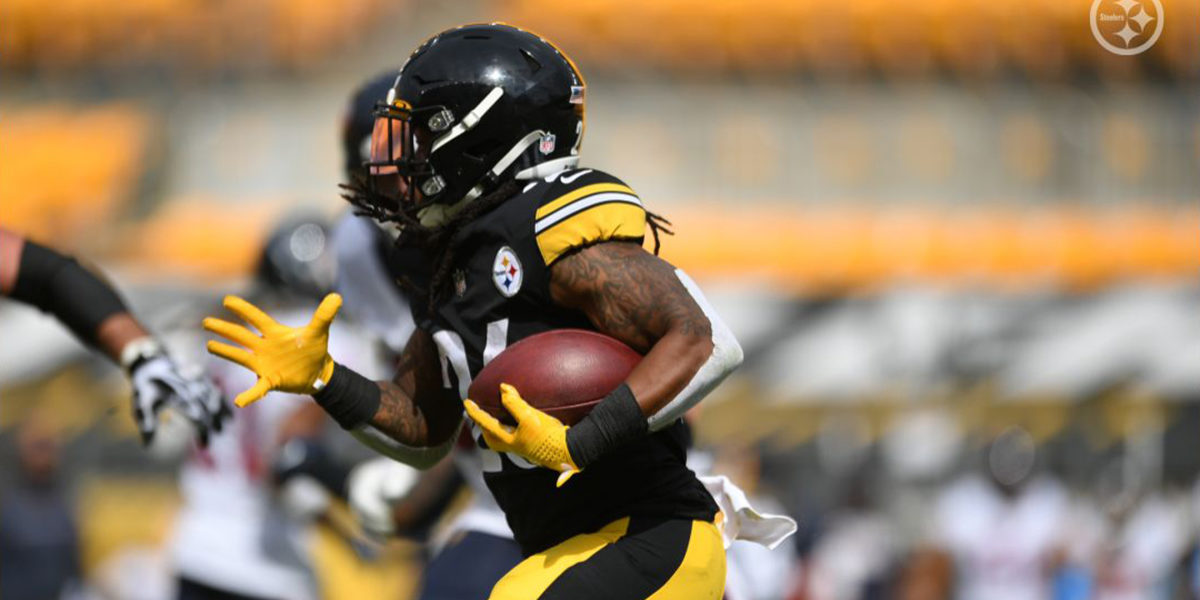 While we’re one month away from Halloween, this column isn’t of the “trick or treat” variety.

Five Steelers players logged their first snaps on the offensive side of the football in Sunday’s Week 3 victory over the Houston Texans. Let’s have a look at who they were and why they saw the field for the first time in this game.

The obvious name which tops this list is perennial All-Pro right guard David DeCastro, who was injured for the first two weeks of the season.

DeCastro returned on Sunday to play every single one of the Steelers 80 offensive snaps – and he didn’t appear to have any rust in doing so.

DeCastro appears to be a fixture for the offense going forward the remainder of the season.

They hype surrounding this rookie was quelled over the first two weeks of the season when the Steelers 2020 fourth-round draft choice, Anthony McFarland, was an inactive against the Giants in Week 1, and received a helmet, but did not play in Week 2 against the Broncos.

However, Pittsburgh chose to get McFarland involved in Week 3 against a porous Houston Texans run defense, the rookie running back carried the ball six times for 42 yards, a 7.0 average which included a 20-yard long.

While coach Mike Tomlin has been hesitant to use a committee approach in the Steelers backfield, Sunday’s win might be an indication that his previous thoughts have changed. With a stable of unique runners, and attempting to groom the younger players while preserving James Conner, this may not be the last we see of McFarland throughout the 2020 season.

With Diontae Johnson leaving the field via a possible concussion, and being ruled out of the game shortly thereafter, the Steelers leaned on playing Chase Claypool more often, but also subbed in another receiver who had yet to see action with the offense thus far this season.

Ray-Ray McCloud has been opening eyes as a return specialist for the Steelers through their first three games. On Sunday, McCloud entered the game for three plays – he was not targeted and didn’t show up on the stat sheet otherwise, but it’s an indication that he may find a role in helping stretch the defense with his speed, much like Darrius Heyward-Bey did for several seasons prior.

Hawkins, originally the Steelers fourth-round pick in the 2016 NFL Draft, was traded in 2019 to the Buccaneers, along with a 2021 seventh-round pick, for their 2021 sixth-round choice.

He would then sign with the Houston Texans, who released him and placed him on the practice squad.

When Zach Banner was injured, the Steelers went searching to add depth to their offensive line and poached Hawkins from Houston – Sunday was his first action with the Black and Gold going back to the 2017 season.

Hawkins was utilized as an extra blocker, primarily in run-heavy looks – totaling 19 snaps (24%) of the offensive plays against the Texans.

With Banner on IR for the remainder of the season, expect to see more of Hawkins in the “tackle eligible” position which Banner occupied in 2019.

Despite what you’re reading, this is not a typo.

When Chase Claypool sealed a Steelers win late in the fourth quarter, Fitzpatrick entered the field to “Dot The I” in the team’s victory formation – a spot which was once Pro Football Hall of Famer Troy Polamalu’s.

The use of Minkah in this position is ceremonial and strategic – should the ball come loose, he has the awareness, speed, and defensive savvy to stop what could be a disastrous mistake.

Look for Fitzpatrick’s presence on kneel downs to be a standard in future games.