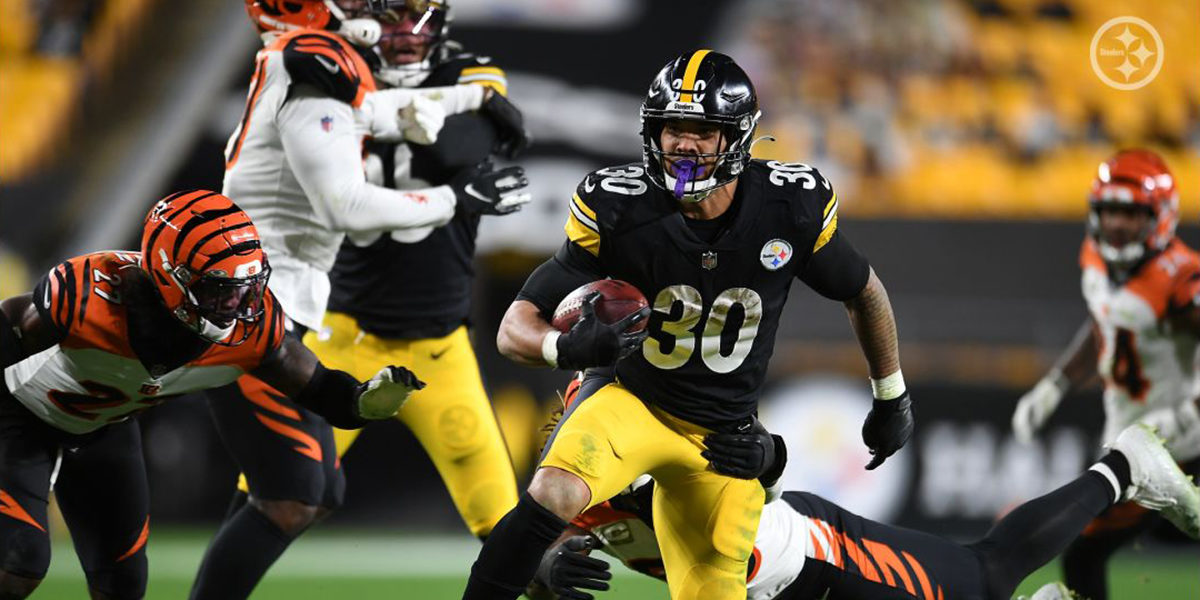 I know a few of yinz are probably giving me that weird look right now. The Steelers, who have run for 48, 46, and 44 yards in each of their last three games are suddenly going to go off?

Yes. I am going bold this week in stating that the Steelers will get more rushing yards this Sunday against the Jacksonville Jaguars than they have combined (137) in the last three games!

No, I’m not going crazy. Let me explain.

The team has heard all of you. They’re tired of being called the “worst” 9-0 in history. They’re tired of seeing power rankings spot the defending Super Bowl champion Kansas City Chiefs ahead of them (despite KC have a loss and their opponents having a combined worse record than Pittsburgh’s.)

They’ve heard the noise about not being able to run the ball – and they’re prepared to make fools out of everyone down in Florida against a Jaguars team that can’t defend against anything.

I know fans are thinking that we’ve seen this script before, with the Cowboys and Bengals both having poor defenses too. However, this is a different breed of game.

The Steelers aren’t playing a team off of a bye: both Baltimore and Cincinnati entered their games having an extra week of rest. The Steelers aren’t coming off of a total war against the Ravens either, where both teams give so much that they limp into battle the next week.

This is a Steelers squad that appears to be fully healthy for the first-time all season. And while they’re not looking ahead to a Thursday Night Football Turkey Day clash with Baltimore, it will factor into what happens in this game.

I believe the game script will be as follows: the Steelers build a lead and then start playing possession football. James Conner might not top 100 yards, because he’s going to have 20 or fewer carries.

Up by a comfortable sum, the Steelers will start pulling players in the warmer Florida temperatures – both for rest and experience. We will see more of Benny Snell and Anthony McFarland (inactive last week). We may even see replacements on the offensive line, such as Kevin Dotson, come in later in the game.

That means the Steelers have to cruise through the Jaguars, which shouldn’t be a problem. Their team will start a rookie sixth-round quarterback in Jake Luton, which is never a good sign. But the main indicator that the Steelers can (and will) run the ball all over the Jaguars is this: they can’t stop them.

In nine games this season the Jaguars defense has given up over 100 yards to their opponents seven times. They have failed to hold any opponent to under 80 yards as well.

The Cincinnati Bengals and Detroit Lions, not the teams you think of with big ground games, each put up huge stats against Jacksonville. The Bengals ran for 205 yards while the Lions put up 180.

Furthermore, aside from a 107-yard effort two weeks ago by the Texans, and the aforementioned pair of sub-100 games, the Jaguars have given up at least 123 yards in each game (Titans) and then it goes to 135 for the remaining handful of games.

Mike Tomlin’s teams traditionally get stronger as the season wears on. We’ve seen James Conner top 100 yards three times in 2020 and Benny Snell had done so in Week 1. Snell got close to 100 twice in 2019 as well with 98- and 91-yard games against the Bengals and Ravens.

Sprinkle in McFarland, consider the team called up Trey Edmunds last week to the 53-man roster, and include a now healthy Derek Watt at fullback – as well as bringing swing tackle Jerald Hawkins back (inactive last week due to illness) and the Steelers appear to be a team that’s poised to steamroll over their upcoming opponent.