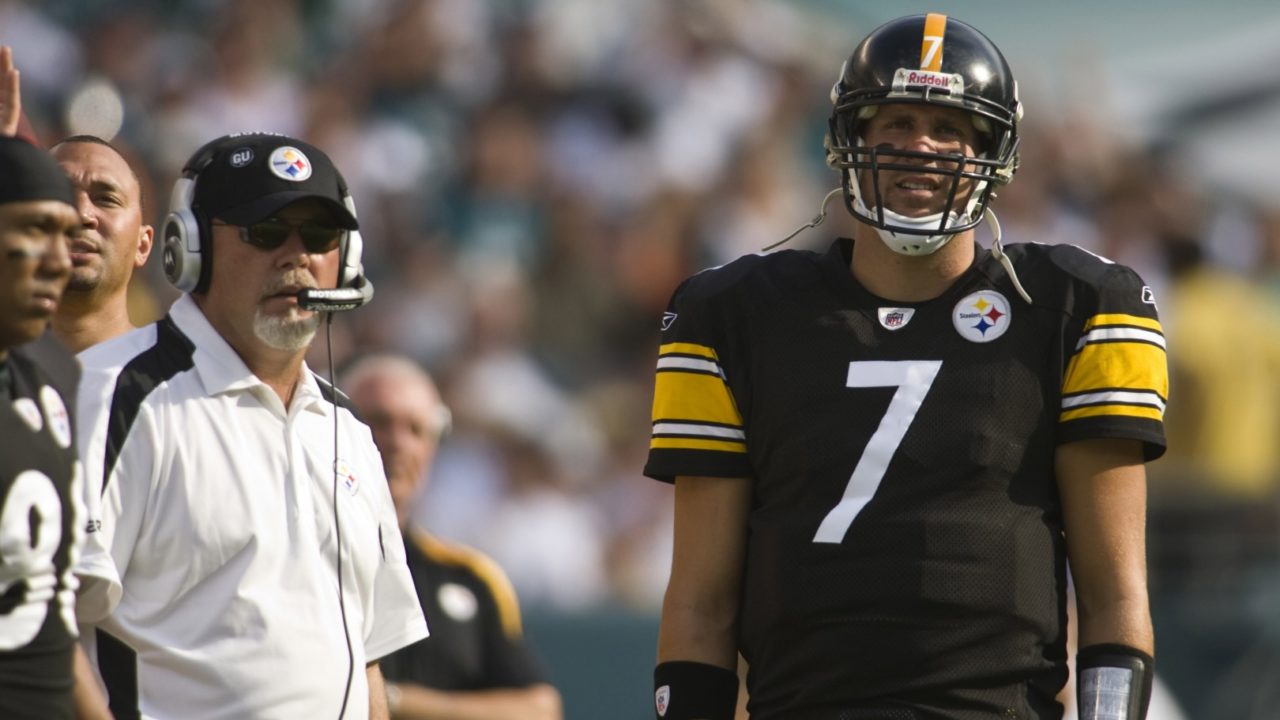 Many critics of current Steelers head coach Mike Tomlin enjoy pointing out whenever Bruce Arians is doing well, insinuating he should’ve been the team’s pick for the top position instead of Tomlin.

Following Sunday’s Conference Championship victory by the Tampa Bay Buccaneers, that segment of “fans” is louder than ever. They truly believe that Arians walks on water and has been infallible since leaving Pittsburgh.

Nothing could be further from the truth – and just because Arians is in the Super Bowl now doesn’t necessarily mean he would’ve been the right choice to retain as offensive coordinator, or to promote to head coach over Mike Tomlin. (For those who want to fire Coach T on an almost daily basis.) The revisionist history of what happened under Arians, before and after for each the coach and the Steelers, is quite astounding.

Yes, Arians has two Super Bowl rings (and three appearances) with the Steelers. However, he was only the offensive coordinator for the latter two appearances (and one win) and I often wonder how those who say Mike Tomlin inherited Bill Cowher‘s players can say with the same face that Bruce Arians was responsible for the offensive output (or lack thereof) of those Pittsburgh teams.

Rewinding, there were a number of candidates from Bill Cowher’s staff who interviewed for the head coaching gig once the newly minted Hall of Famer retired heading into the 2007 season. Among them where offensive coordinator Ken Whisenhunt and offensive line coach Russ Grimm.

If the team showed any interest in moving him that far up the ladder, it wasn’t made public.

The highest position Arians had held prior in the NFL was that of OC for the Cleveland Browns, who let him go to start 2004. He was added to the Steelers roster that season, and served three seasons as the wide receivers before being promoted to offensive coordinator in 2007.

He was “forced into retirement” following the 2011 campaign which saw the Steelers offense dip to the 21st in points scored, the second time an Arians-led offense had fallen to 20th or lower in his five seasons as OC: and the lowest offensive outputs by Pittsburgh since 1998.

The team had also relied on defensive scoring and close wins far too often, including six such wins in Arians’ last year.

Arians’ final game with the team saw the Steelers collapse in overtime to a Tim Tebow led Denver Broncos team.

A lot of fans quickly dismiss the sentiments of the time, where everyone practically wanted to run Arians out of town the same way they had with Todd Haley three years ago and Randy Fichtner… three weeks ago.

Arians landed in Indianapolis as the offensive coordinator in 2012, but quickly ascended to being the interim head coach when Chuck Pagano was diagnosed with leukemia. Arians led the Colts to a 9-3 record, a quick turnaround that credited him with his first of two AP NFL Coach of the Year awards.

However, lost in the “quick turnaround” shuffle was a Colts rebuild. They had spent all of the previous season without franchise quarterback Peyton Manning, who would be replaced as Pagano and Arians both arrived in 2012 with top overall draft pick Andrew Luck.

Also easily forgotten was Arians health issues, where he even missed the Colts’ Wild Card game due to an illness.

Pagano would return as Arians became a hot candidate for a head coaching gig – he would sign with the Arizona Cardinals. In five seasons with the Cardinals, Arians would lead his team to two playoffs while winning his second coaching award. However, his last two seasons were marred with subpar seasons, finishing 7-8-1 and 8-8. He was also linked to the retirement of Cardinals QB Carson Palmer, who sustained a number of potentially unnecessary hits in Arians’ style of offense: a criticism which also befell him in Pittsburgh with Ben Roethlisberger.

Arians took a year off to become a TV analyst before resurfacing as head coach of the Tampa Bay Buccaneers in 2019.

The Bucs would struggle, finishing 7-9 behind QB Jameis Winston’s record-setting “30/30 Club” pace – Winston is the only quarterback in NFL history to throw both 30 touchdowns and 30 interceptions in the same season.

Arians and company again made waves this past offseason as Tom Brady fled from New England and long-time head coach Bill Belichick to sign with the Buccaneers. The move helped facilitate some other key signings, including coercing Rob Gronkowski out of retirement and persuading the NFL to reinstated disgruntled wide receiver Antonio Brown midway through the season.

By Week 13’s Bye Week, there was dissention in the ranks in Tampa. While there were flashes of the old Tom Brady and high-powered offenses, the Bucs had slipped into a 7-5 record and would need a strong finish to ensure they made the postseason.

Tension was evident between Arians’ and Brady’s preferred style of offense, with the head coach publicly stating later that he allowed his quarterback to “choose all of the plays”. When asked if that meant game day preparation or in-game play calling, Arians responded with “everything” as his answer.

The Brady factor makes one wonder just how much credit Bruce Arians can receive, three teams and all of these years later, by Steelers “fans” who heralded him as superior to Mike Tomlin.

Arians quarterbacks are well-known for getting sacked, injured, and otherwise turning the ball over.

In 2012, Andrew Luck began his career with a 23:18 TD:INT ratio. Carson Palmer kicked off his Cardinals tenure with a 24:22 ratio and finished it with a 9:7 ratio before retiring after a seven-game season.

Tom Brady threw 11 picks up until the bye week, with the preceding four games including seven such tosses – he had never thrown more than 14 interceptions in any of his 20 previous seasons and finished with 12 in 2020, a stat which certainly helped Tampa win their last 7 games and appear in the Super Bowl.

As for Arians’ track record in five seasons with the Steelers, Ben Roethlisberger had a 113:57 ratio.

Alarming, however, was the 215 sacks that Big Ben sustained during that span.

In the nine seasons which followed Arians’ departure, Roethlisberger has only gone down 202 times. (Granted 2019 can be scratched due to Ben missing all but six quarters of the season.)

By comparison, Winston was a sack shy of being the most-sacked quarterback of 2019 (47). Palmer was sacked 22 times in 7 games his final season (a pace of 56 sacks) and brought down a total of 137 times in 60 games over five seasons in Arizona. (Luck was also sacked 41 times with Arians at the helm.)

Therefore, when fans try to exacerbate the Steelers recent shortcomings by holding Bruce Arians on a high pedestal, I simply cannot get on board. Moving on from Arians prolonged Ben Roethlisberger’s career as Todd Haley installed a more upright pocket passing system in which the quarterback operated out of.

Roethlisberger would see his best statistical seasons under Haley as well.

In comparison to Mike Tomlin, Arians had missed the playoffs in five of his previous seven seasons as a head coach prior to the 2020 season.

His combined playoff win total over that span? One: an overtime victory over the Green Bay Packers in the 2015 Divisional Round aided by a three-play, 80-yard drive capped off by a Larry Fitzgerald 75-yard catch-and-run, and 5-yard Fitzgerald pitch-and-catch touchdown.

The Cardinals would be walloped by the Panthers 49-15 one week later in the NFC Championship.

As for Arians, I don’t wish him any ill will and despite the negative slant of this article, I positioned most of what I said against fans who are too overzealous about his recent accomplishment of making it to the big game.

The comments above also illustrate how difficult it is to win in the NFL, especially when it comes to qualifying for the playoffs. A maximum of eight teams can claim a playoff victory of the 12 who qualified (prior to 2020, or 14 who now qualify under this year’s new rules). Often, that number is fewer as teams make an early exit – even with a bye.

I do wish Arians the best of luck, but I will forever hold close that he was not the proper fit for the Steelers offense at the time nor would his coaching prowess have yielded any vastly different results from what Mike Tomlin has done for the franchise.