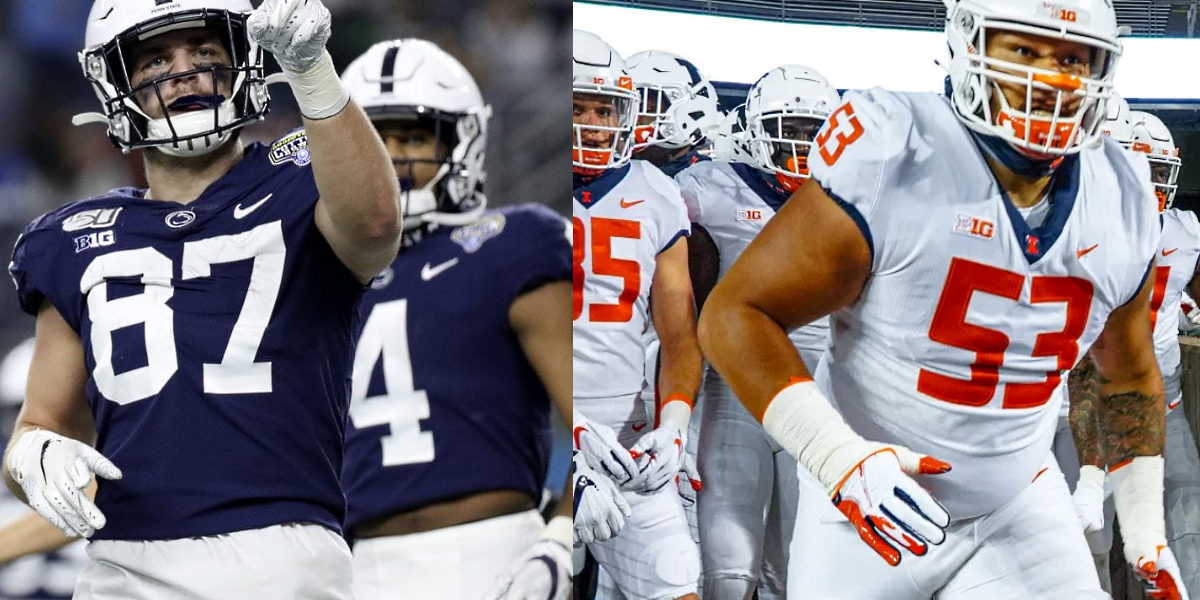 The Pittsburgh Steelers didn’t do what was expected by so many of their fans on Friday night in rounds two and three of the 2021 NFL Draft; they grabbed an athletic tight end with their second-round pick (No. 55 overall) and a versatile interior offensive lineman with their third-round pick (No. 87 overall). Penn State’s Pat Freiermuth, the First-Team All-Big Ten and Big Ten Kwalick-Clark Tight End of the Year award winner, was followed by Illinois’ Kendrick Green, a USA Today second team All-American selection, Associated Press All-Big Ten first team selection, and consensus All-Big Ten first team selection as an interior offensive lineman.

How’s that for busting the ‘expert’ mock drafts and stepping away from the norm of picking guys they had ‘ties’ to through largely publicly-announced meet-and-greets, Zoom meetings, and predictability?

Freiermuth, who was announced by Steelers Hall of Famer Franco Harris Friday night, received a lot of comparisons to Rob Gronkowski long before he was selected by the Steelers. At 6-foot-5, 251, Freiermuth is a big tight end that is known for having soft hands, the ability to fight off defenders, and grab yardage after the catch.

“The guys I look up to are obviously ‘Gronk’, watching him growing up but I don’t like the name ‘Baby Gronk’… Obviously [Travis] Kelce and [George] Kittle, and I’ve watched Tyler Eifert a little. I’ve been comped to him, kind of seeing what he does well.” – Pat Freiermuth

Freiermuth may have caught some analysts off guard a bit due to shoulder surgery that sidelined him for all but four games with the Nittany Lions in 2020 but that didn’t keep him from winning the Big Ten awards he did. In three seasons at Penn State, Freiermuth recorded 92 receptions for 1,185 yards and 16 touchdowns; he set the program record for tight ends. His ability to be deployed inline, in the slot, and on the wing, should give the Steelers more versatility on offense, especially with Eric Ebron also on the roster.

“Classic throwback tight end with soft hands, the ability to get yards after the catch and, more importantly, he puts the ball in the paint.” – Bucky Brooks, NFL Network analyst

All Steelers fans need to do now is figure out how they’ll come up with a loud chant every time Freiermuth moves the chains or makes a big play; the best guess may be “Paaaaaaaat,” at this point.

Green wasn’t necessarily on the radars of Steelers mock-drafters in comparison with bigger names like Penei Sewell, Christian Derrisaw, Creed Humphrey, or Alex Leatherwood. NFLDraftBuzz.com had Green listed at No. 23 in their list of top offensive line prospects. In the end, however, it doesn’t matter who offered what grade except for the scouting group of the Pittsburgh Steelers organization.

“I am really excited about ‘KG’. He is a guy we had our eye on,” Steelers offensive line coach Adrian Klemm said following the selection. He was the alpha in that [Illini] program. He is just a tremendous player. He can do it all. The pulls, physical in the run game, pass protect. All of those things.”

There is a real possibility that Green will see reps in training at both center and guard as he has experience at both positions in the interior offensive line.

Klemm continued, post-selection, to point out the inherent qualities that endeared Green to him and the Steelers staff. “You have that dog in you, that wolf in you. I love it when I find a guy that I don’t have to bring that out in,” Klemm admitted. “He plays with that nasty disposition. It sets the tone, especially at the position. It’s in the belly of the beast. If we play collectively like that, it’s contagious.” Finally, Klemm added, “A lot of guys are pushers and shovers. [Green] is a puncher.”