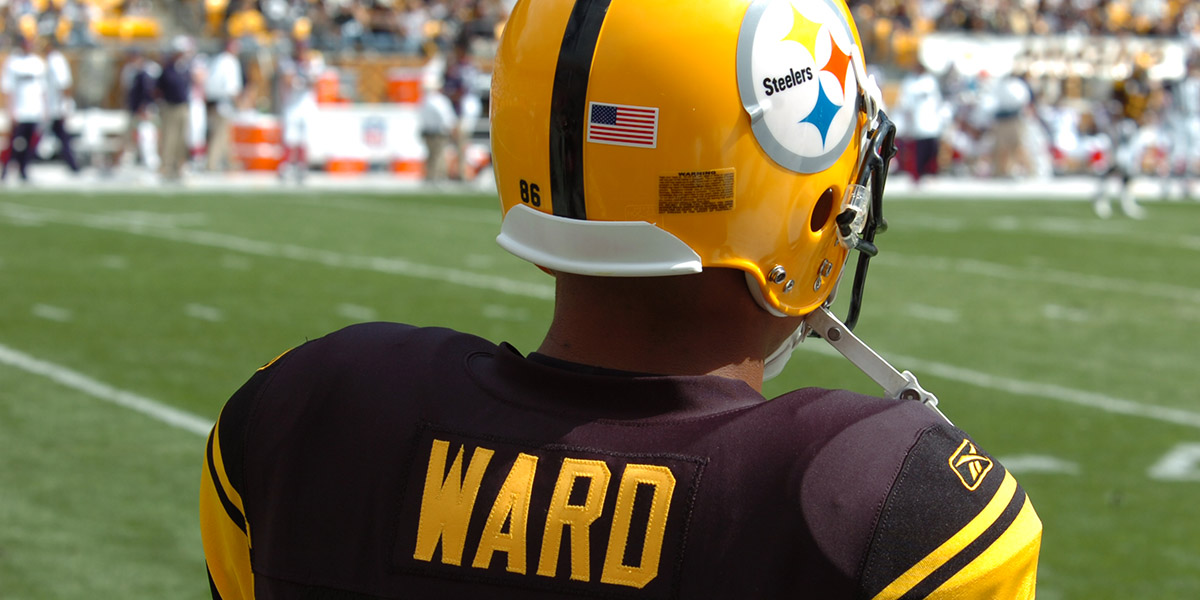 Is Hines Ward a future Hall of Famer?

During the NFL offseason, a number of stories and discussions creep up around various fan groups. One of those discussions is whether or not Hines Ward is a future Hall of Famer.

The answer isn’t that simple, but it was further complicated with the recent retirement of New England Patriots WR Julian Edelman. The football media started discussing if Edelman was Hall of Fame material – which directly flies in the face of the former Steelers receiver.

Ward has been a part of the Hall of Fame voting process since he became eligible. His numbers are justified, especially at the time of his retirement – and far out shadow those of Edelman.

Unlike some other players, I feel Ward is a fringe Hall of Fame candidate. Ward is deserving, but I feel he’s going to fall into a category behind that of his peers – where more deserving players are going to leapfrog him in the process year-after-year.

Ward has made it as a semifinalist in each year of voting since he first became eligible with the class of 2017 (with the voting process beginning to take form in 2016).

In each of those years, Hines has failed to make it out of the semifinalist process into being considered a finalist. During this period of time, other receivers such as Isaac Bruce, Torry Holt, Terrell Owens, Randy Moss, and Calvin Johnson have all been voted into the finalist round (with Holt being the lone player not selected to the hall as of this time.)

No one can argue the accomplishments of the 29 receivers currently enshrined in Canton, but Johnson’s recent inclusion could open the door for Ward. “Megatron” played nine dominant seasons for the Detroit Lions – retiring too early according to some, to have been considered for a bronze bust.

However, Megatron was a one-of-a-kind player who topped 1,000 yards in all but two of his nine seasons, and led the league in receptions and yards, or was among the top leaders statistically when he wasn’t ahead.

Hines Ward was overlooked at this time, despite having enough stats of his own to hold up as hall-worthy. In 14 seasons, Ward caught 1,000 passes for 12,083 yards and 85 touchdowns: all Pittsburgh Steelers records.

When you consider he’s ahead of other Steelers gold jacket recipients such as John Stallworth and Lynn Swann, that should make voters do a double-take… despite Stallworth and Swann playing in an era with less passing.

Ward may have played in an era with more passing, but it’s the current era that makes his numbers look pale in comparison too. Since his retirement following the 2011 season, Ward has been passed in receiving yards by the likes of Brandon Marshall, Julio Jones, Jason Witten, Anquan Boldin, Andre Johnson, Reggie Wayne, Steve Smith, and the ageless Larry Fitzgerald.

Say what you will, but that list isn’t full of surefire Hall of Famers either – though some like Fitzgerald, Jones, and Wayne are likely candidates at some point. (Wayne is already eligible and has been a finalist in each of the last two years.)

Interestingly enough, the yards argument puts Ward in a category of current Hall of Famers who are hovering around his 12,000 yards, including Charlie Joiner, who played 19 seasons and only has 63 more yards than Ward.

Ward also has more yards than Megatron, and when Wards 85 receiving touchdowns are taken into account, he ranks higher than his 26th all-time in yardage at 16th overall – also more than Megatron’s 83.

Yes, I get that Johnson played fewer seasons, but statistically, this is part of the point of this exercise.

As of this date, Ward also remains 14th-overall in receptions with exactly 1,000: more catches than Randy Moss, Andre Reed, and Monk.

His inclusion in the Hall makes the best argument for Ward. Some will be quick to point out Irvin’s hardware – three Super Bowl rings – but Hines has two plus a Super Bowl MVP that Irvin doesn’t.

Irvin has two All-Pro nods of which Ward has zero, but only one Pro Bowl vote separates the two as well.

Ward will also be remembered as a hard-hitting player who forced the league to change their playing rules, as well as having an infectious smile and a Dancing With The Stars appearance that gives him some fictional bonus points which should eventually edge him into the Hall.

The comparisons can go on for days – Ward is certainly deserving. He finished his career 8th-overall in receptions, 18th-overall in yards, and tied for 11th-overall in touchdowns – with Hall of Famers Paul Warfield and Lance Alworth.

This sheer conversation, and the amount of other Hall of Famers Ward’s name is being spoken with, should see him get his day in Canton.

However, I feel it’s a matter of timing. Ward will need a window where other big-name receivers don’t infringe on his own conversation.