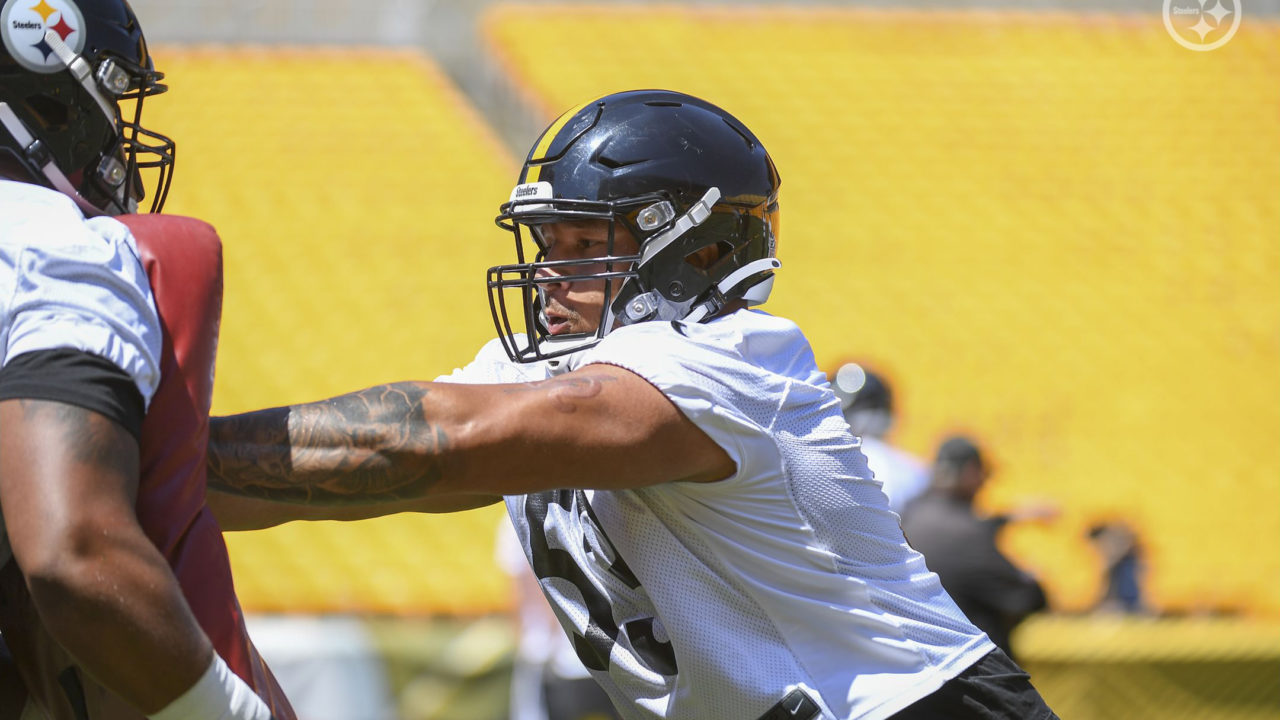 Coincidentally, I had saved this offensive position group for last in this preview series, and that turned out to be a wise choice.

Heading into the 2021 offseason, everyone and their brother knew that the Pittsburgh Steelers were going to overhaul their offensive line. The question was, by how much?

Anchoring the line and still under contract were veterans Maurkice Pouncey and David DeCastro – each in their early 30’s but with a decade of pro football under their belts. Speculation ran rampant as to whether or not either player would retire, with Pouncey being the first to officially walk away roughly one month after a poor performance in the playoffs.

No DeCastro news was good DeCastro news, until he didn’t make an appearance at OTAs and then showed up for the first day of minicamp, only to disappear again.

During this, the Steelers brought in a free agent guard for a visit, and the rest is now history, a DeCastro was released last Thursday. His ankle requires a third cleanup, and he is currently contemplating retirement.

The Steelers also parted ways with Alejandro Villanueva, choosing to not make an offer to bring him back – and similarly lost starting LG Matt Feiler, who signed with the Chargers during free agency.

The group is almost entirely new, with the exception of one starter returning from 2020. For everyone who feels the sky is falling in Pittsburgh, the glass is also half full: if the line was purportedly bad in 2020, then how much worse can it get in 2021? (While also getting younger and cheaper!)

Here’s a look at the Steelers offensive line headed into this year’s training camp.

Okorafor is the lone returning starter on the 2021 offensive line, but with an asterisks: he’s moving from playing right tackle to left tackle this year, in place of Villanueva.

Villanueva was often a revolving door last season, despite having a higher grade than what some of us saw on film. He didn’t give up many sacks (3) nor did Okorafor (also 3) so the hope is not only that “Chuks” excels with his change of sides, but that the sack totals – good or bad – weren’t just a product of Randy Fichtner’s “dink and dunk” passing game were Ben Roethlisberger often released the ball within seconds.

If Okorafor isn’t the guy, there isn’t much for depth behind him. He’s also entering a contract season, which means the Steelers may be looking to upgrade beyond 2021, but again, the hope is he’s a pillar this season.

So I lied: Banner also started last season, however, he was hurt in the first game and lost for the season.

That injury opened the door for Okorafor to play at right tackle, where Banner will look to return for 2021.

A large specimen of a man, officially listed by the Steelers at 6-foot-8, 335 pounds. He follows a trend of large Steelers tackles, such as Villanueva and Max Starks.

Banner had been a bit of a journeyman and project prior to last season. Fans will recall his name being announced at Heinz Field as “reporting eligible”, and followed by cheers. It’s the same path that Villanueva, and Chris Hubbard followed, as the extra tackle in run-heavy packages, which then led to a starting role.

Leaving Banner on the right rather than moving him to the left will prove to be beneficial as he bounces back from injury.

Again, the hope here is that both tackles perform to at least the level of last season. (Which shouldn’t be too difficult.)

Every draft critic and expert pegged the Steelers as needing a center – what they got instead was a guard they’re going to convert to the center position.

While that may seem off-putting for those who wanted one of the top centers in the draft (and could’ve gotten them), Green’s ability to pull is what the Steelers have always looked for with their dot in the middle of the line.

Most people don’t know this, but Hall of Famer Dermontti Dawson was also a guard in college before converting to center in the NFL.

That’s nice to point out and helps Green’s case in doing the same, but the shadow cast by those before him, such as Dawson, Pouncey, and the late Mike Webster, increase the expectations for any center that the Steelers put on the field.

Green already appears to be a force, a leader in practice and intense on the field.

That intensity may be the x-factor that this young line needs when the season gets underway.

Quite a few people already have Dotson penciled in to replace Feiler at left guard, who had replaced long-time left guard Ramon Foster in this situation a year earlier.

Dotson saw time last year in place of injuries (DeCastro) and shuffling the line around.

In limited time, he flashed big-time potential, ahead of his draft pedigree and rookie experience.

The idea with Dotson is to plug him in and let him maul. Paired with the next profiled player, the interior of the Steelers line should be incredibly strong and a bruising force.

Make no mistake: the loss of a healthy David DeCastro is a big one. When 100%, DeCastro was an elite player, perhaps the best at his position in the entire league.

A banged up DeCastro was no better than average at best in 2020, missing for some games, inconsistent in his play, and also drawing penalties (which were nearly unheard of).

A healthy Turner is a five-time Pro Bowl player at the same position. He was languishing in free agency after coming off of an injury that cost him seven games in his lone season with the Chargers last year.

In every other season that Turner has played, aside from his rookie one, he has been a solid starter, seldom missing games and making a Pro Bowl in all of those five campaigns.

He’ll step in right away and contribute as the veteran presence on an otherwise inexperienced Steelers line.

While the Steelers have other veteran backups such as Rashawn Coward and Joe Haeg on the roster, Finney projects as the most prominent of the linemen not already mentioned, with a shot to contribute as either a guard or center – both of which he has experience playing with the Steelers.

There’s some thought that Finney may start the season as the team’s center instead of Green. I believe that notion to be valid because of the signing of Turner to play right guard (a position Dotson could’ve slid over to, with Finney having often played in Ramon Foster’s left guard spot).

Regardless of where Finney winds up with playing time, he’s a crucial piece to the Steelers success along the offensive line this season.

The last player profiled is Moore, a fourth round pick out of Texas A&M.

I believe Moore will eventually get an opportunity to be compete as a starter, but with the amount of change already in progress in Pittsburgh, it’s likely the rookie takes a “redshirt” year and sits out unless his name needs to be called due to injury or need: should Okorafor or Banner not be the fit the team envisioned.