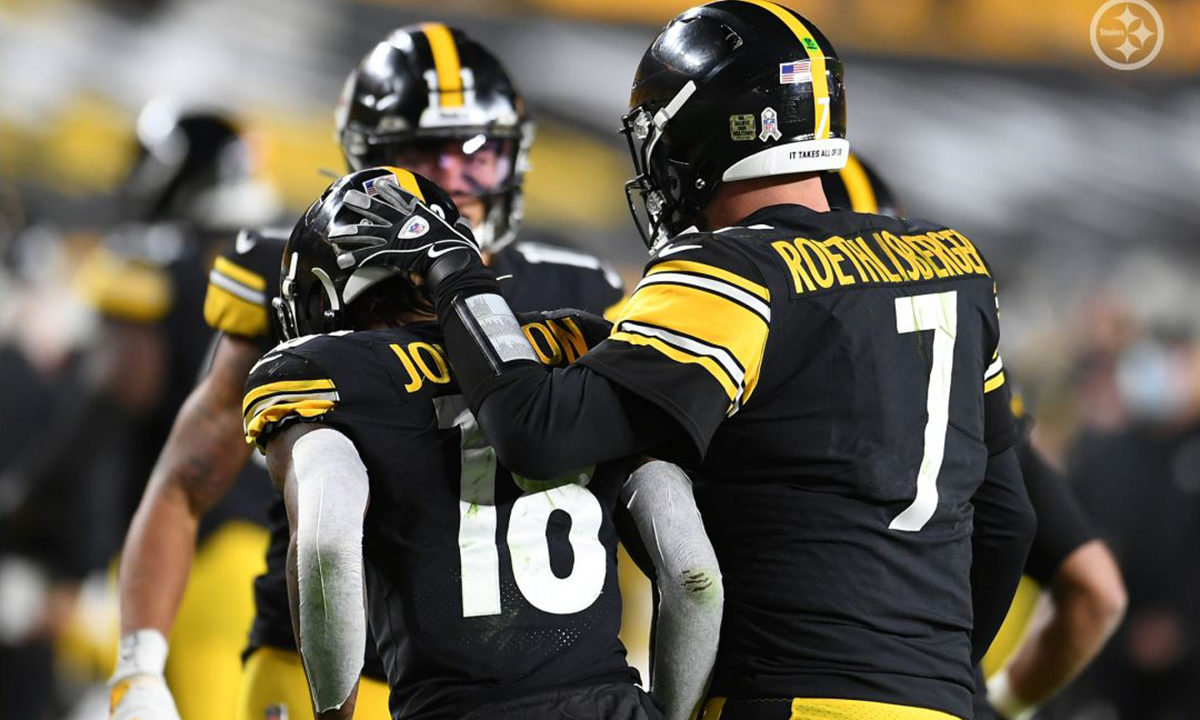 The sports media was getting restless waiting for the first misstep of the now 8-0 Pittsburgh Steelers.

Two consecutive road games saw the Steelers edge their division rival Baltimore and escape a near snafu against Dallas.

This led to a new narrative that the Steelers were the “worst 8-0 team ever” by any talking head with an opinion. Surely, the Steelers would see their downfall returning home to host another AFC North opponent, the Cincinnati Bengals, and their first overall pick at quarterback, Joe Burrow.

However, it wasn’t Burrow who shined the brightest at quarterback in this Week 10 clash.

This put the Steelers up an uncomfortable, and not insurmountable, 6-0, before Ben Roethlisberger took the game into his own hands.

Big Ben would start on his own 26-yard-line and hit WR Diontae Johnson for 46 yards on first down, then get another chunk of 16 yards connecting with James Washington – before nailing Johnson again with a 12-yard touchdown pass.

The Steelers would go for two, but Roethlisberger was unable to connect with WR Chase Claypool and the odd 12-0 score stood.

The Bengals had a worse go of it, punting three straight times before giving up the ball on a Tee Higgins fumble forced by Cameron Sutton right after the Steelers quick 3-play, 74-yard drive.

Unfortunately, the Steelers went three-and-out with James Conner losing six yards on a run and Johnson unable to haul in a short pass from Roethlisberger. Jordan Berry would punt 37 yards to the Cincinnati 10, pinning them somewhat but not enough.

The Bengals would respond with a 90-yard drive over 8 plays that saw them get on the board with a 4th-and-2 redzone shot when Burrow found Higgins. The 12-7 score wouldn’t hold long, as Roethlisberger would lead a 78-yard drive of his own, ending with a JuJu Smith-Schuster touchdown reception to put the Steelers back up 19-7.

Burrow would continue to be harassed throughout the half as his linemen would be penalized or he would be sacked. The Steelers would operate another Chris Boswell ending drive afterward, entering halftime up 22-7.

The Bengals would be unable to manage much more offense in the second half, punting five consecutive times before finally getting back on the board with three more points in the fourth quarter.

Meanwhile, Ben Roethlisberger would hook up for two touchdowns with Chase Claypool, from 11 and 5 yards out.

The Steelers started playing backups such as Mason Rudolph, Benny Snell, and JC Hassenauer as they improved to 9-0 on the season with a 36-10 victory.