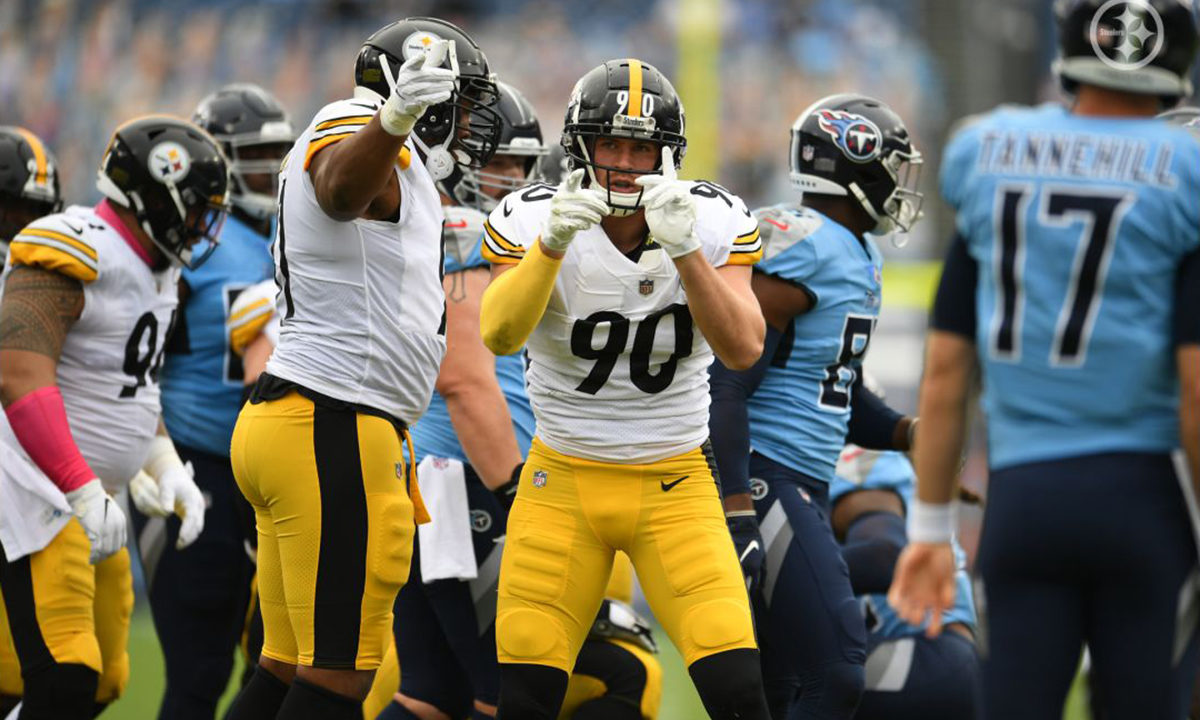 As expectations and predictions about the 2021 Pittsburgh Steelers season continue to pour in, I feel one thing is being embarrassingly overlooked: the defense.

Last year’s Steelers defense was among the league’s best in several statistical categories, including points allowed and first downs allowed, plus led the NFL in sacks for a fourth-straight season.

Despite those losses, there’s no reason to believe this Steelers unit won’t be as strong as it was last season. Here are some reasons why.

The most-overlooked impact to the Steelers unbeaten streak and late season slide was the loss of their defensive play-caller, Devin Bush.

One has to look no farther than the 2017 Steelers season and what happened when LB Ryan Shazier was lost nearing the end of that campaign. Conversely, in both seasons, the Steelers also lost Shazier and Bush’s backups too.

Bush would be placed on IR following Week 6’s thumping of the Cleveland Browns, where he was replaced by Robert Spillane who went on to have a Cinderella story as a starter. Spillane wouldn’t skip a beat, stopping Titans RB Derrick Henry like a brick wall and causing Lamar Jackson to throw his first career pick-six.

Unfortunately, Spillane was also lost to IR, missing the final four games of the 2020 season: the Steelers lost four of their last five as Avery Williamson, who was traded for before the mid-year deadline, had a trial by fire to jump in and pick up the slack.

Bringing back Bush, 2019’s tenth-overall pick in the draft, should add way more dimension and solidity to the interior of the Steelers defense. So much so that it should make up for some of the aforementioned losses, seeing as Bush only played in 4.5 games.

Simply speaking, if you can picture a team getting it’s starting defensive QB back as a good thing, then you’ll see why Bush is such a big deal for the 2021 defense’s prospects.

Highsmith was already a starter

Bud Dupree might be gone, but his replacement was already on the roster last season: and he also showed a lot of promise.

Alex Highsmith was drafted last year as the would-be insurance policy against losing Dupree in free agency. As many noted, Highsmith appears to have grasped the pro game faster than Dupree, who had a late coming out party over the last two seasons.

When Bud was placed on IR, Highsmith didn’t show any signs of being a weak link, getting to the QB six times with two sacks, as well as an interception in only 5 starts.

His numbers in his last eight games were actually better than the Browns’ prized free agency signing, Jadaveon Clowney too.

Seeing as Dupree didn’t truly flourish until two years ago, coinciding with the firing of OLBs coach Joey Porter and replacing him with DC Keith Butler overseeing his old role, one could safely assume Highsmith is in good hands.

Also consider this: the rest of the Steelers defensive front, including T.J. Watt, Cameron Heyward, and Stephon Tuitt, will all make Highsmith’s job a lot easier.

Speaking of that front

The three defensive linemen haven’t changed. Heyward and Tuitt return, with the latter registered double-digit sacks, second on the team only to Watt.

Tyson Alualu had a change of heart, re-signing with the Steelers as a run-stopping, double-team eating tackle who swings over to end to spell Heyward and Tuitt too.

The trio is a heck of a force but that doesn’t include the aces up the Steelers sleeves either.

I felt Cameron Sutton was the highest priority free agent for the Steelers to bring back: which they did.

Sutton’s signing made Steven Nelson expendable, and those looking from the outside can’t figure out why. However, in spot duty playing outside corner, Sutton registered a lower passer rating and had more breakups than Nelson on average. He also created more splash places, forcing fumbles and showing a propensity for being where the ball is, picking off a pass and recovering three lost fumbles by opponents.

His versatility sees him fill in as nickel corner (Hilton’s former spot) as well as safety.

The versatility will help the Steelers adjust to the loss of Hilton though all indications are Sutton will be given snaps as an outside corner. Seeing as he’s already shown flashes as a playmaker in that spot, the betting line is that he will be no lesser of a player than Nelson, with a shot at having a higher ceiling. (Read: the defense may be even better.)

Minkah Fitzpatrick is the best safety in the league

When you can boast that you have one of the top players in the entire league at any position, then there’s a good chance your defense is trending upward.

Fitzpatrick always shows up as one of the highest-rated safeties in the league, capable of changing a game at a moment’s notice.

How many teams can boast they have one of the best pass rushers in the league, who has been a finalist for the Defensive Player of the Year award two years in the running?

Quite frankly, after what I said about Fitzpatrick above, you’d be surprised to find out there’s a better All-Pro defender on the same team and people are still sleeping on that defense. Yet, that’s precisely what’s going on with this year’s predictions.

There’s five names to fear, and I didn’t get to the other eleven starters: twelve if you count a nickel cornerback replacement for Mike Hilton (who could play anywhere from 30-60% of snaps depending on the matchup that week).

Add in veteran corner Joe Haden, a consistently improving former first-round pick in Terrell Edmunds, a solid run-thumping and blitzing veteran linebacker in Vince Williams, plus the aforementioned Alualu, Highsmith, and Sutton, and the roster is nearly rounded out.

Nothing ever is. Yet, match this defense up against most of their opposition and the Steelers are going to create headaches for them. The front seven can be the best in football, and the defensive backfield returns four of its five starters, with a slew of options to help replace their slot corner. That role is up for grabs to those such as rookie Tre Norwood, second-year pro Antoine Brooks, free agent signing Miles Killebrew, or even one of last year’s corners who saw some playing time like Justin Layne or James Pierre.

Remember, Hilton was an undrafted, unknown player too. Dupree and Nelson’s replacements already have starting experience, and the rest remains the same.

That’s more than enough optimism for the 2021 Steelers defense to rise to occasion.