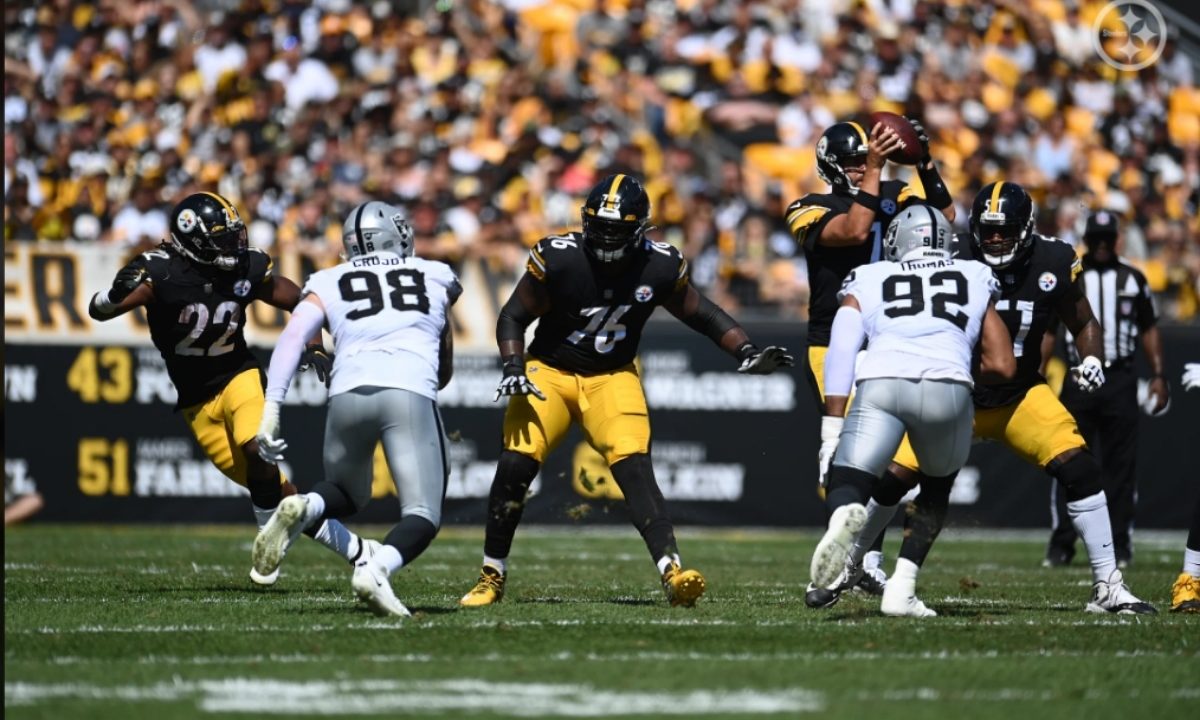 Everything leading up to Week Two of the 2021 NFL regular season seemed “arrows pointing up,” for the Pittsburgh Steelers, to use a similar phrase to head coach Mike Tomlin’s. Yes, there were concerns about a less-than-complete offense. Yes, there were concerns the defense may not be able to maintain the need to create extra effort to carry that offense. In what looked, at least on paper, a potential close game felt like one the Steelers would find a way to win. Unfortunately, that wasn’t the case as the Las Vegas Raiders got the upper hand as injuries and penalties doomed Pittsburgh’s chance to open the season 2-0.

Tyson Alualu was named the starter in the middle of the defensive line in place of an already injured Stephon Tuitt. He sustained an ankle fracture per the Steelers. The injury occurred in the early moments of a game where Joe Haden and Devin Bush were already sidelined; they were replaced in the starting lineup by James Pierre and Robert Spillane. After earning a strip-sack on Derek Carr – his second in two weeks of play – T.J. Watt pulled up short after a few plays later and hobbled off the field. Watt, who sustained a groin injury, was unable to return to the game. That required Alex Highsmith and Melvin Ingram to generate outside pressure while also helping in run-coverage and short pass situations to the outside.

Although the Steelers’ defense held things together in the first half, the toll of those injuries kept them from being able to prop up a Pittsburgh offense that has yet to truly find its identity, especially as parts of the offensive line struggled to keep Ben Roethlisberger from getting hit by a heavy Raiders defensive rush.

The loss of key defenders created mismatches that Carr was able to manipulate in order to give life to the Raiders’ offense as they turned from the run game and opened things up for multiple receivers.

Although the Steelers kept fighting, they weren’t able to fully recover or develop an on-field fix for the voids and miscues.

Most penalties are unnecessary mistakes. There are times when an offensive lineman may be guilty of a hold to prevent their quarterback from getting belted into the next time zone, however. Limiting the need for that is why execution is emphasized so much because any loss of downs can force a game loss.

In this game, the Steelers had two major penalties that are hard to overlook as simple mistakes, however. Ray-Ray McCloud took offense with a Raiders defender after handling a kick, apparently unhappy about being wrapped up although the whistle had blown. It set the Steelers offense back to open that drive. Later in the game, Trai Turner got into it with a Raiders player after one play and then appeared to spit into the face of that individual in front of an official; he was disqualified from the game as a result despite the Raiders also being flagged for unnecessary roughness in the extra-curricular activities.

In their home opener, at Heinz Field, in front of over 60,000 fans, these may have appeared like the officials were overreacting. Unfortunately, video evidence was very clear that hot heads resulted in costly penalties that were completely avoidable and weakened the offensive line the most as they had to replace another piece.

Running back Najee Harris had some nice plays despite a Raiders defense that played the run tough. He earned his first NFL touchdown in the game in dramatic fashion by jumping into the end zone past the pylon.

Rookie tight end Pat Freiermuth still has yet to drop a ball thrown to him.

Although there were some very nice plays on offense, there was still miscommunication on some routes that made it much harder to create scoring drives. Because the positives were small, and infrequently stack in back-to-back plays, momentum didn’t truly shift in Pittsburgh’s favor enough to overcome weaknesses.

The Steelers gave their game away to Las Vegas with a final score of 26-17.