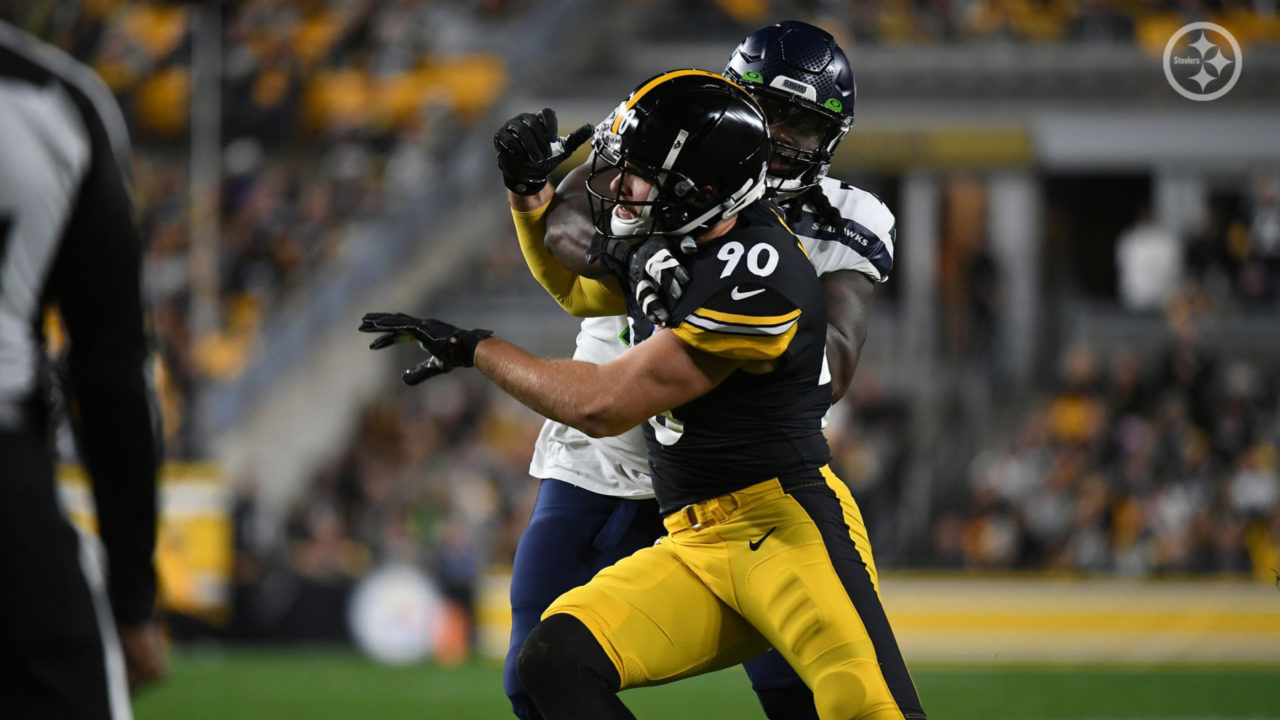 Another week of anxiety Steelers Nation! Fingernails and hair were all missing on Victory Monday, as a game that was in the bag in the first half turned into an overtime thriller: which probably shouldn’t have been anything but!

However, that wasn’t the big surprise from this game. In fact, it was pointed out that it could be close on last week’s Steel City Underground pregame podcast (with former Seahawks linebacker, Lofa Tatupu adding the same).

So, what were the surprises? Let’s have a look!

Has there been a more surprising new Steeler this year?

Obviously the expectations for Najee Harris and Pat Freiermuth, the top two picks, are through the roof. Most had a high bar for starting center Kendrick Green. But Norwood was a seventh round pick, without much of a defined role. (Mike Tomlin called him a “Swiss Army Knife” during the NFL Draft.)

Yet, Norwood has defined a role – and that role is versatility.

Flirting between defensive back roles (cornerback, safety, dimebacker) Norwood has carved out a niche left behind by Mike Hilton. Furthermore, I believe he’s potentially more valuable than Hilton, able to cover deep as a safety or lineup at the line of scrimmage.

His 15 snaps were only 23% of the game, yet one more than James Pierre. Norwood would have three tackles, one for a loss, and a pass deflection Sunday. The latter two plays were both on Seattle third downs, forcing the Seahawks to punt.

Color me pleasantly surprised by his progress thus far.

By this point we really shouldn’t be surprised by anything Watt does, yet, his name appears here again. At some point in overtime, Watt must’ve said “screw this” and took the game into his own hands.

A true and bred leader, Watt has been one of the strongest and most reliable defensive players, especially if you look at any of the top football stats websites around.

His two sacks on the night? Each of the last two times Seahawks QB Geno Smith had the ball, the final of which resulted in a strip sack and fumble recovery which led to Chris Boswell‘s game-winning field goal in sudden death.

While we’ve come to expect this type of performance, it’s still extraordinary. So much so, Watt was named the AFC’s Defensive Player of the Week.

Highsmith’s name is one I’ve been patiently waiting to type here. He would finish the night with four QB hits, more than anyone else on the team.

His 1.5 sacks kept Smith in check, while Seattle’s offensive line was also penalized for holding while trying to keep the edge rusher from getting to their passer.

Sorry Ray-Ray, but this is my first negative surprise from Sunday.

I had thought that the Steelers finally got away from running the ball out on kickoffs when Ryan Switzer was released the season before, but apparently not.

McCloud has struggled to even get out to the 20-yard line, let alone the 25-yard line (the default starting point if he were to just take a knee in the end zone).

Special teams play isn’t the only reason I’m down on McCloud.

In the absence of JuJu Smith-Schuster, who is likely done for the rest of the season, McCloud ascended into the WR3 role, where he was incapable of breaking any tackles and gaining even one yard in the Steelers first overtime possession. He would finish the night with 2 catches for 18 yards.

I presume McCloud’s playing time is due to Washington having a lingering injury from the previous week, as the former out-snapped the latter 52-8. Steelers WR coach Ike Hilliard shouldered the blame, but alluded to how the division of labor was rationed out, and how Washington didn’t practice enough at one of the spots for the coach to feel comfortable with having him in for more of the game.

Asked Ike Hilliard how much of an asset James Washington can be in the passing game, and he was incredibly expansive on what led to Washington's limited reps Sunday.

Injuries and their recoveries in the position group were a significant factor to the division of labor. pic.twitter.com/R4mjEMNQk9

In fact, the only offensive player to play fewer snaps Sunday was Derek Watt. The fullback played six snaps to Washington’s eight. (Ouch.)

Two receptions on seven targets, for 17 yards – that’s something I can look past if McCloud is hopping in as WR4. That’s not something I expect from a presumably WR1 level threat.

I’m more surprised he was tagged with several penalties too. It has to get better.

This is the biggie.

How you could not be astonished by how badly the referees performed in the final minute of regulation?

First, there was a contested catch right in front of the Steelers bench. Seahawks WR D.K. Metcalf bobbled the ball while trying to drag his feet inbounds. He was incredibly tight to the boundary line and questionably, at least in real time, had a catch.

The zebras didn’t blink. The 3rd-and-1 play went for a first down as Seattle continued downfield, where Metcalf would find himself the target of controversy two plays later, as he made a catch, a football move, and then had the football punched out of his hands by James Pierre.

Amidst all of this, Metcalf and Swain both failed to get out-of-bounds and precious seconds ticked down to zero. Or did they?

Referee Shawn Smith stopped the game to review what was all but a definite catch and run seen by the 60,000-plus in attendance and millions more watching at home.

Someone, somewhere, decided this play must be reviewed, which gave Seattle a boatload of time to prepare to spike the football as soon as play was restarted on the next whistle. Generously, the referee crew gave Geno Smith and company three seconds to spike the ball as well, which arguably only one second remained during the original run of play: which would’ve resulted in the timeout-less Seahawks kicking team scampering onto the field in a mad dash, before the play clock might expire.

Instead, it was all casually done as if Seattle had a fourth timeout in their pocket to begin with, setting Jason Myers up with a game-tying field goal conversion that sent the teams into bonus football.

Shame on the NFL and shame on the referees for upsetting the competitive balance of this game. (Apparently no one had heard of home field advantage!)